From Standing Rock to Yanacocha: Criminalizing environmental activism in the Americas. 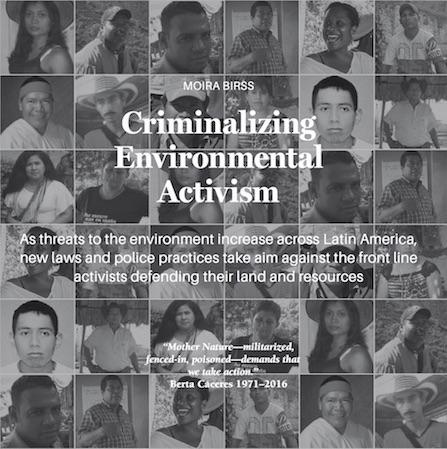 NACLA Radio is now available on iTunes! Click here to subscribe for the latest updates from the podcast.

Helen is joined by NACLA Report contributor Moira Birss, whose article for the fall issue examines how governments and private companies have used a combination of violence, harassment, and legal tactics to criminalize and stifle movements for environmental justice in Latin America. The advent of free trade agreements has enabled international extractive companies to bring legal charges against governments that don’t sufficiently support business initiatives, and pressure leadership in resource-rich nations to ramp up the attack on environmental justice movements.

These attacks come in the form of physical violence— murders and disappearances of environmental human rights defenders have increased over recent years throughout the region— as well as stigmatization. By criminalizing a variety of protest tactics, pro-extraction actors both slow organizers by inundating them with legal complaints and lawsuits and also stigmatize environmental justice organizers and undermine their relationships with larger communities by characterizing them as criminals, terrorists, and agitators.

Women have emerged as leaders of environmental justice movements across the region, in part due to the incarceration of so many male leaders, but also because of the crucial role women play in affected communities as leaders, organizers, and teachers. One activist, Lolita, details how the harassment women face is different and specific, and often involves the threat or realization of sexual violence.

Moira Birss brings over decade of human rights and social justice advocacy, communications, and field experience to her current role as Communications Manager at Amazon Watch. Previously, Moira was the U.S. Advocacy Officer for Peace Brigades International - Colombia and a Human Rights Observer with FOR Peace Presence in Colombia. Moira has a BA in Latin American & Caribbean Studies from the University of Michigan and an MA in International Affairs from the Fletcher School at Tufts University.