Could the origins and code of ethics of São Paulo's largest prison gang offer a new way to think about prison security policy in Brazil? 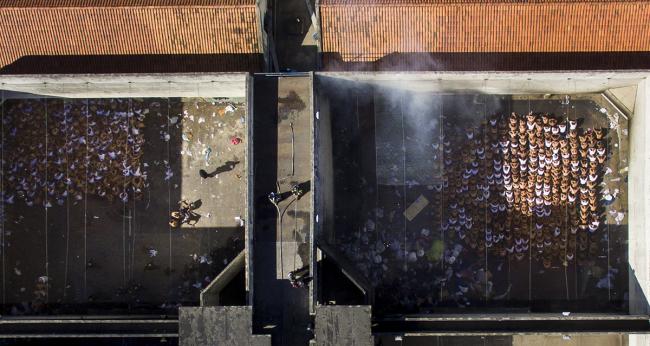 A prison massacre in Manaus, located in the northern Brazilian state of Amazonas, was one of the headline stories ushering in the new year. On January 1, some 60 prisoners were killed and decapitated, some of them cut into pieces. The press described the killings as the result of a war between two prison factions: the Primeiro Comando da Capital (First Capital Command, PCC) and the Família do Norte (Family of the North, FDN), who are allied with the Comando Vermelho (Red Command, CV), and instigated the slaughter.

In his 1991 book, later adapted into a film, William da Silva Lima, a founding member, narrated the history of the Comando Vermelho. According to Lima, the Comando Vermelho was founded in 1979 in the now-defunct Ilha Grande prison off the coast of Rio de Janeiro state, where ordinary criminals and political prisoners were incarcerated together. The media has circulated a narrative that political prisoners of the Brazilian military dictatorship (1964-1985) instructed ordinary prisoners in forms of organization and war tactics. But this perspective denies regular prisoners, considered ignorant and savage, the capacity to organize themselves, articulate their demands, take political stances—not to be confused with engaging in party politics—and claim their rights.

This idea, circulated by state actors and the media, also incorrectly treats the Comando Vermelho as a group whose shape mirrors the state model in terms of organization, hierarchy, and order, consistent with the political orientation that supposedly inspired it. Few researchers or journalists are willing to speak with prisoners themselves, and assume the police version to be the only true representation of criminals. But those who have engaged with prisoners have found a different story: the Comando Vermelho is not an organization, but a “behavior, a way of surviving in the face of adversity,” its foundation considered a “true cultural revolution within jail,” based on principles of respect and non-violence, according to Lima's book. Subsequently, this behavior disseminated through-out favelas. With the growth of drug trafficking and the CV's involvement in it, they came to be seen as a criminal organization responsible for the importation, distribution, and sale of illegal substances in Rio, and, in recent years, other states in Brazil.

The story of the CV is important to recount because the adversities Lima refers to are the same that motivated the rise of the PCC in prisons in São Paulo in 1993: precarious living conditions, violence by police agents, and constant fighting amongst prisoners. At the time, the PCC proclaimed an alliance with the CV and even adopted their motto: “Peace, Justice, Freedom, throughout urban areas in São Paulo.” The media, public opinion and state actors perceive its organization as similar in structure to the CV. Likewise, this image portrayed by state forces also varies from the descriptions by those who have performed close research with prisoners or criminals.

This research demonstrates that, contrary to state formation, neither the PCC nor the CV were founded with regard to racial or cultural differences. In fact, disputes over scarce resources within precarious prisons sometimes even lacking beds, disputes originating from outside of prison, and disagreements over the proper ways to behave towards one another motivated prisoners to fight each other. After the rise of the CV, the PCC and other factions that developed in Rio de Janiero and São Paulo and other Brazilian states have distinguished themselves through different ideas, behavioral norms, and strategies in combating adverse situations.

Such disagreements motivated what would come after the Manaus Massacre. According to experts, the assassination of a trafficking kingpin in Paraguay the previous year had already marked the end of the alliance between the CV and the PCC and the beginning of disputes over the control over trafficking routes through the Amazon. But for members of the PCC, prisoners share a common enemy—the state—and pledge that they remain united to confront it. The PCC considered the murders as carried out in “cowardice” and immediately promised revenge.

Indeed, a few days later on January 6, another uprising took place at a prison in Roraima, a funding-starved state also located in northern Brazil. This time, the death count was 31, and many were beheaded. Days later, prisoners at the largest correctional facility in Rio Grande do Norte, in the Brazilian northeast, invaded a rival-led prison block. Using weapons they had made or obtained in the prison, PCC-affiliated prisoners clashed with the Sindicado do Rio Grande do Norte (Union of Rio Grande do Norte), allied with the FDN and the CV, over prison space. The government of Rio Grande do Norte requested federal aid, and national security forces were sent to quash the rebellion. The official death count in this case was 26, though additional remains of charred bodies were later found in a trench. The government declared that it had lost all the records of the approximately 1,150 prisoners in the facility, rendering it impossible to count the living, the dead, or the fugitives. In just twenty days, the year 2017 had already seen 140 prisoners dead, according to the official count.