In the wake of Hurricanes Maria and Irma, the Caribbean must escape the trappings of modern-day colonialism and seek out its own kinds of sovereignties. 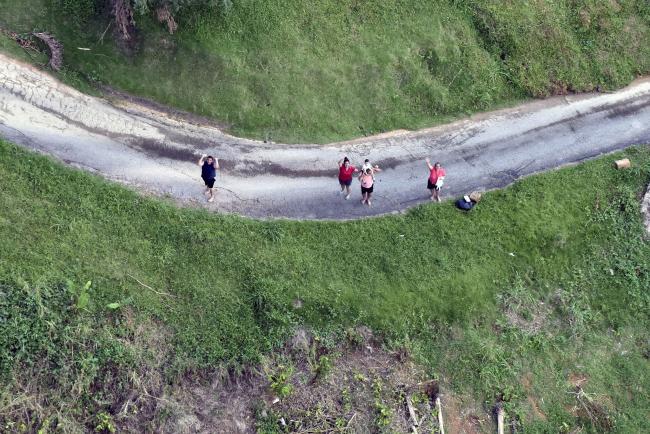 María and Irma, 2017’s two most destructive hurricanes in the Caribbean basin, have exposed the trappings and inequalities of colonialism in the region. The hurricanes have blown away decades of legal and international maneuvers and ruses, local constitutions, and moves towards autonomy and integration and administrative reclassifications—leaving exposed a simple colonial truth.

Such reclassifications have deemed these islands everything from overseas territories (such as the United Kingdom’s British Virgin Islands) to unincorporated territories (like the United States’ Puerto Rico and American Virgin Islands) to overseas “departments” (like France’s Guadéloupe and Martinique) to overseas “collectivities” (like France’s Saint Martin and Saint Barthelemy) to overseas “municipalities” (The Netherlands’ Bonaire, Sint Eustatius, and Saba). Yet the hurricanes have shown that the Caribbean islands, regardless of title, as all colonies throughout history, exist to serve the colonial masters, and not the other way around. Even sovereign island nations, like Dominica, seem to float in the same colonial stew of dependency and underdevelopment that paved the way to the destruction of human habitation in some of these islands after the hurricanes.

The hurricanes, most agree, are man-made catastrophes. Global warming has fueled super hurricanes that are more frequent and destructive than ever. Global warming is man-made. But so too is the fragile infrastructure of the islands, its energy, food, agricultural, tourism, land-tenure, finance, and debt regimes. All presented the perfect background to what we saw in the last two weeks of September of 2017.

Puerto Rico’s fiscal crisis set the conditions for the degree of destruction Maria wrought. Much has been written about the vulture funds’ grip on the island’s economy, the billions owed in a national debt that decision-makers in Washington, D.C. have refused to audit, the unelected fiscal control board set up in the capital to extract money owed to Wall Street interests. That’s not to mention the austerity measures: the proposed cuts to the minimum wage and pension funds, the closing of schools, the neglected infrastructure. This neoliberal nightmare scenario meant the infrastructure and disaster preparedness necessary to mitigate a disaster like Maria were completely neglected.

Beyond recovery efforts, how do we think about this situation in ways that are not only theoretically relevant, but that allows the residents of Puerto Rico to develop a more secure, just, and equitable future? In short, how do we decolonize the Caribbean?

The truth is that talk of independence is a non-starter for many of the residents of the region. More than 500 years of European colonialism is a heavy tradition not easily disposed of. Scholar Yarimar Bonilla has wisely and skillfully avoided the at-times unproductive debate about independence for French overseas departments. Also, not even national independence our official post-colonial statuses helped island-nations escape fully their colonial grip—see Haiti, Dominica, Cuba, the Dominican Republic, and more. But post-coloniality and decolonization are two different things, and I argue we must achieve the latter.

Food sovereignty concerns establishing autonomy and equitable shares of food regimes, from agriculture to farming to fishing to imports and exports, that determine how and what we eat, and to whose benefit. A rapid glance at the diet of the average Puerto Rican, at the agricultural and food regime changes in Puerto Rico from Spanish to American colonial times, shows that basic decisions about food—what to grow, who to sell to, at what price, and what people eat—are not organic decisions, but planned regimes that must be critically assessed.

In Puerto Rico, the absolute and unquestionable submersion of the island and its people within the financial control of the United States has created consumption habits and lifestyles that have not only fostered dependence but are also unsustainable. The same can be said of other islands in the region. That is why Puerto Rico and other islands must establish energy sovereignty, and rethink the energy regimes that determine how the islands power electric island-wide grids, dependence on fossil-fuel, the export and import regimes associated with it, and the development of renewable sources of energy.

Finally, the Caribbean must establish land sovereignty. This concerns the regimes that determine how we use and develop land, who owns the land, the possibilities of communal ownership, the decision-making processes related to land, and associated tax regimes. One central idea is to move beyond the current view, which holds that land must either be private or public. Instead, we must explore different alternative land-tenure and land-management regimes such as community land trusts, mutual housing associations, land cooperatives, land banks, intentional communities, conservation land trusts, among others. Land sovereignty is at the center of debates in the island of Barbuda, for example; but in Puerto Rico struggles for land sovereignty have questioned land policy around beaches as it relates to the tourism industry.

In the case of Puerto Rico—and other islands—we must also think and act towards trade sovereignty, meaning sovereignty over the commerce, finance, and cultural exchange regimes that determine trade conditions and who they benefit. Of course, the United States is particularly possessive of its exclusive prerogatives over trade. But, in the case of Puerto Rico, do they have a right to this monopolistic prerogative when their guarantee of color-blind citizenship and the right to determine economic bankruptcy are inoperative or arbitrarily denied?

Diasporas have a fundamental role to play in these processes. Our barrios and neighborhoods in the United States, and in New York City specifically have for years suffered the kinds of devastating consequences that we are likely to see now in Puerto Rico and other islands in the region. Communities of color, in particular Puerto Rican, Dominican and African-American, are the most affected by environmental injustices in New York City. Diasporas have for decades dealt with dynamics similar to those that the hurricanes now render so clear: second-class citizenship, the politics of neglect, conquest, displacement, vulnerability to vulture-developers, weak democratic representation, and lack of transparency.

There are important examples in the island of working-class communities organizing to fight against environmental injustice, gentrification, and displacement, among them the barrios of El Caño Martín Peña. All of these island-based and diaspora-based knowledges need to be leveraged and elevated.

The few success stories of neighborhood protection and resistance to environmental racism that we know about have been possible only through the intra-diasporic horizontal networks of solidarity and concern that the diverse diasporas have developed between each other. These horizontal networks of support, solidarity, and activism need to be replicated in the Caribbean. Our fragmentation is not accidental, and neither will we come together by accident. This is a political process that needs to be coordinated from the grassroots, with transparency, accountability, and democratic participation.

Decolonization will not be easy, but the diasporas here in the United States, and in every imperial metropolis (France, the Netherlands, the United Kingdom) can and will play an important role. Conversely, a decolonization drive in the Caribbean will only heighten the possibilities of decolonization in our own exile communities. This struggle, the push towards achieving multiple sovereignties, is of the utmost urgency—the future of our communities, our neighborhoods, and our ancestral homelands lies in the balance.

Angel ‘Monxo’ López Santiago teaches at Hunter College’s Africana, Puerto Rican and Latino Studies Department at the City University of New York. He holds a Ph.D. in political science from CUNY’s Graduate Center. He is also a  GIS/Mapping and cartographic practitioner. His current research centers on digital mapping and historical GIS within the field of Latino Studies. He is currently at work on a manuscript entitled Spatial Latinos which explores the development of Latino communities in New York City during the latter half of the 19th and early 20th centuries from a geo-spatial perspective.