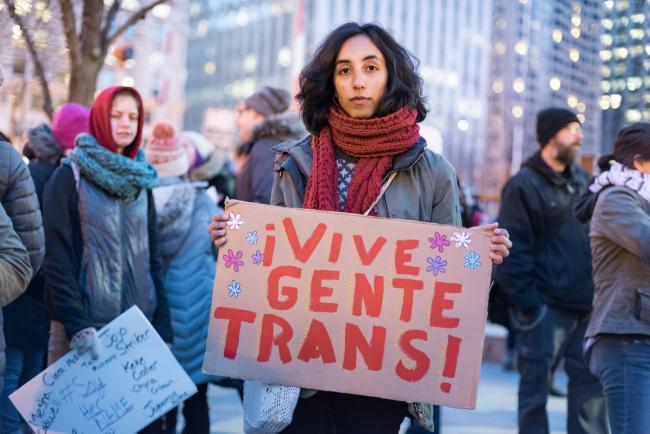 NACLA Radio is now available on iTunes! Click here to subscribe and never miss an episode. And, looking for more analysis of criminal justice issues in podcast form? Tune in to the Decarcerated podcast, featured on this episode of NACLA Radio!

NACLA contributor Andrea Bolivar’s article in the fall issue of the NACLA Report draws on research Andrea did for her dissertation, focusing on how the joint forces of criminalization, transphobia, racism, and the deportation system have affected trans Latina sex workers in Chicago. In this episode of NACLA Radio, Andrea and Helen discuss the forces that contribute to trans Latina women’s outsized representation in sex work, as well as how criminalization, racism, and transphobia create a cycle of violence and marginalization.

Andrea and Helen also touch on issues that are relevant to trans advocacy movements in general, from how cis, white, LGBTQ narratives of the “Gay Liberation Movement” have historically silenced and invisibilized the crucial contributions of trans women of color, to how trans women of color are rarely allowed to profit from their own work— see especially the recent case of Reina Gossett’s documentary about Stonewall leader Marsha P. Johnson. Efforts to publicize violence against trans people, though mostly successful in drawing attention to and honoring their existence, also often risk further entrenching the association between trans bodies and violence.

To learn more about the TransLatin@ Coalition and to support their work, check out their website. View Andre Perez’s documentary Been T/here, about daily life for trans Chicagoans, here. If you’re trans and in need of someone to talk to, the Trans Lifeline is staffed by transgender volunteers, and you can reach them in the U.S. at (877)565-8860 or in Canada at (877)330-6366.