How favela residents in Rio are fighting back against threats of eviction by forging new identities based on ecological preservation. 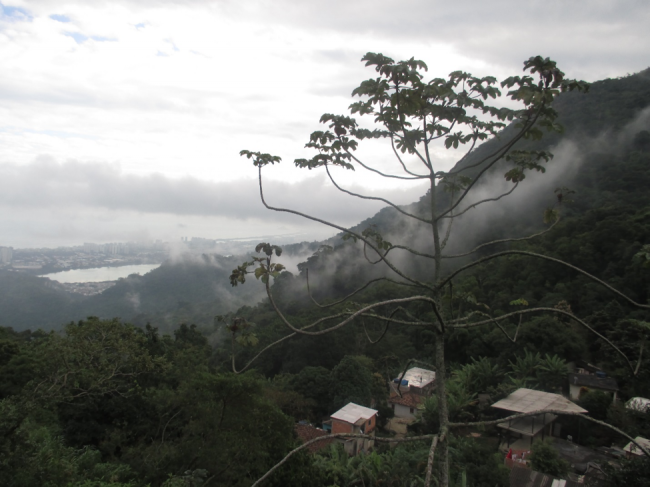 In the lead up to the 2014 World Cup and 2016 Olympic games in Rio de Janeiro, Brazil, mass evictions displaced thousands of residents living in the city. Yet favela residents have continued to suffer eviction threats since these mega-events. The new city administration under Mayor Marcelo Crivella has lamented that “irregular housing” has put undue pressure on a supposedly already fragile environment, and envisioned creating more public parks and leisure areas in the city’s West Zone through evictions in its new 2017-2020 Strategic Plan. While these plans have been canceled after public outcry from affected residents and allies, given Crivella’s well-known antipathy towards favelas, activists remain concerned about future eviction attempts.

Stigma towards the favelas as expressed by Crivella and others in his administration is not new. The first favela, Providência, was founded in 1897 by soldiers returning from the Canudos War, the bloodiest war in Brazilian history. The soldiers who had been promised land if the imperial Brazilian army won, but the government did not keep its word—these soldiers decided to occupy a hill, where poor residents evicted from substandard tenement housing soon joined them. Municipal administrations at the time saw these unsanctioned settlements as public health hazards and antithetical to the goal of creating modern Brazilian cities. Therefore, they were targeted for removal.

Today, many cariocas still believe that favelas are dangerous, unclean, and illegal occupations that degrade the city. The government also talks about certain favelas being in “areas of risk,” particularly those built on hill slopes or riverbanks, which they argue poses a risk both to the environment and to residents. There is certainly violence in some favelas and there are problems of inadequate, open sewage systems in some communities owing to the fact that the government oftentimes does not provide these services to favela communities. Notwithstanding, stigma against the favelas serves as a justification for eviction.

Activists living in favelas and their supporters have worked to counter this prejudice. For example, the Observatório de Favelas organization in the Complexo do Maré favela regularly holds meetings, seminars, and cultural events to educate all Rio residents—those who live in favelas as well as those who do not—about issues affecting favela residents and to promote cultural activities like baile funk that are produced in favelas. Other favelas, namely those in or near protected ecological reserves, have sought to challenge the idea of favela residents as invaders and polluters by emphasizing their own contributions to environmental preservation.

Activists have sought to change the discourse on favelas is by adopting an identity based on the idea of what sociologist Camila Moraes calls an “ecological favela.” This idea argues that the natural environment surrounding favelas in areas of environmental protection have becomes a characteristic part of the community and promotes stewardship among residents. In a similar vein, favelas actively involved with environmental projects are lauded as models of sustainable urban development.

One such favela exemplifying this idea is the Vale Encantado favela, which translates to “enchanted valley,” a small community of about twenty families living in the federally owned Tijuca Forest in Rio’s Alto da Boa Vista neighborhood. According to Otávio Barros, President of the Residents’ Association of Alto da Boa Vista, three families who arrived in the area after the founding of the area’s first coffee plantation founded Vale Encantado in the late 18th century. Throughout the 1900s, these families grew their own vegetables that they then sold downtown, later moving on to selling flowers once competition from vendors with low-priced goods made selling produce unprofitable.

Soon enough, selling flowers also became unviable, and a granite quarry operating in Vale Encantado emerged as the only local source of income. Work in mining the granite to sell as building material brought new families to the community but also led to deforestation. When the federal Public Prosecutor’s Office forced the closure of the quarry in 1988, many of the neighborhood’s more recent arrivals left as well. In its wake stood the monumental task of rehabilitating the area while finding new sources of employment for its residents.

In 2005, the Public Prosecutor’s Office sought the expulsion of Vale Encantado, claiming that the favela was an illegal occupation that polluted the environment. Twelve years later, their expulsion case is still in the courts. In the meantime, Barros seems be doing what he can to position the favela in a favorable light to counteract negative images of favela residents as polluters and invaders.

With the help of a few fellow residents, Barros started an ecotourism cooperative, which organizes tours that primarily serve both foreign and Brazilian ecotourists and university students from the community. On a typical tour, Barros explains how, with the help of local universities and foreign nonprofits, residents have been able to construct environmentally friendly sewage and compost systems, or biogestors. These biodigestors collect organic waste that, after fermenting, produces a biogas akin to natural gas that Vale Encantado uses for heating and cooking. He also shows off rudimentary solar panels that bring electricity to the neediest houses while teaching tourists the names of native plants that grow wild in the area, explaining their traditional uses. All tours end with a meal cooked by residents employed by the cooperative using produce grown in the community. Aside from generating needed income in a community with high levels of unemployment, Barros hopes to use the ecotourism business to educate his neighbors about their responsibility in taking care of the environment. 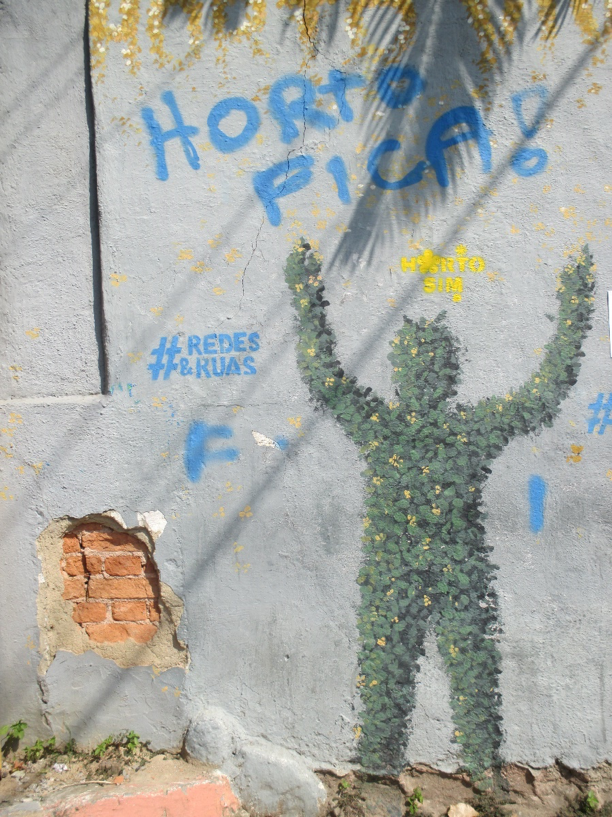 While an environmental identity develops in Vale Encantado, it is already established in Horto, a community located alongside Rio’s Botanical Garden. Horto, which translates to “garden” in Portuguese, traces its history to the colonial era, but its most recent establishment was as a settlement of Botanical Garden employees who were given permission—oftentimes informal—to build houses nearby in the late 1800s. Like Vale Encantado, the residents of Horto once sold plants out of their namesake garden.

But a more explicitly environmental identity has emerged over the years as Horto has fought against the eviction of its residents. 215 of the 589 families that live in Horto have received eviction notices, and while a vast majority of them are also stuck in the courts, others have moved more swiftly. This is particularly true of houses on land closest to the Botanical Garden, which hopes to repossess the land Horto occupies in order to expand. The Botanical Garden, along with the media conglomerate Globo, whose headquarters are located down the street, and other critics, accuse Horto residents of invading and denigrating the environment.

Aside from attempting to show that they aren’t invaders by talking about the long-term occupation of the area by certain families, community activists have railed against the accusations that they destroy the environment. The Commission of Horto Residents regularly holds recycling drives where they encourage children to recycle. Some residents have also led projects to educate Horto children about native plants while they help plant seedlings in barren areas of the community. Others still are spearheading projects to create community gardens in vacant spaces, including in areas where houses have been torn down. Throughout Horto, several permanent banners and murals proclaim the continued existence of the favela while communicating the importance of environmentalism to residents.

The community projects undertaken in Vale Encantado and Horto do more than educate residents about the environment, provide jobs, and create a stronger sense of community; they also provide an additional avenue through which these favelas fight for the right to stay. By assuming and promoting an ecological identity within their communities, community activists subvert discourses that liken favelas to a kind of destructive invasive species, instead championing themselves as communities that are in fact living closely with nature and are its natural stewards. These sustainable, ecological favelas have the potential to lead in the movement for a greener Rio de Janeiro, and by doing so, nullify an argument in favor of favela removal.

Jennifer Chisholm is a third-year PhD student in the Department of Sociology at the University of Cambridge and a visiting researching at the Pontifical Catholic University of Rio de Janeiro. In Rio, she is researching how favelas in and around nature reserves strategize against eviction. Her latest article is “Forced Evictions and Black-Indigenous Land Rights in the Marvelous City”.