Colombia’s far right is on the attack, working to block peace as laid out in the historic 2016 accords. Manipulating and targeting academia has become a key weapon in their arsenal. 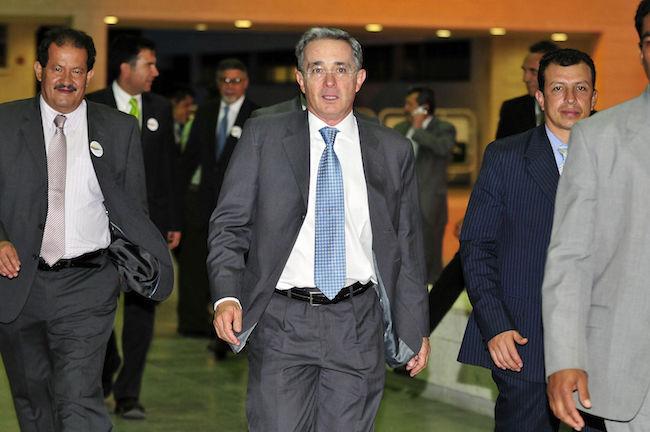 Colombian academics have long faced politicians who misrepresent scholarly work, manipulate undergraduates for partisan ends, and appropriate university spaces as platforms from which they project themselves as intelligent and respected. But former president Álvaro Uribe Vélez manipulates academia on a transnational scale. Both within Colombia and internationally, he uses university platforms to present himself as a thoughtful leader, able to draw out the lessons of Colombian history. Such self-presentation is dangerous, given his extremism. In Uribe-speak, for example, the democratically-elected sitting president Juan Manuel Santos is the political equivalent of Fidel Castro, and Colombia’s dynamic economy, with its diverse civil society, is sliding toward the kind of catastrophe playing out in Venezuela. This is wholly false.

Uribe alternately attacks and praises administrators and faculty at Colombian universities, uses both local and international students for political ends, and engineers appearances at top-rung universities in the United States to extend his political brand. This results in “biographies” of the ex-president appearing on the copyrighted webpages of Stanford, Harvard, UCLA, and the University of Pennsylvania, with a double benefit to him. He is able to present himself, accurately, as having access to elite institutions; at the same time, prestigious websites whitewash his past. He gets play as a Colombian statesman and a champion of democratic values, with little mention of his attempts to undermine the peace process led by President Santos.

Academics in the United States take it for granted that politicians of all stripes will cherry-pick our work. What serves their ends is produced with impeccable methods, has been carefully vetted, and commands respect because it is associated with prestigious institutions. Meanwhile, research that yields contrary findings reflects researchers’ special pleading and the failings of self-involved, elitist institutions. Reagan’s policy team praised or ignored Milton and Rose Friedman as they saw fit. Al Gore exhorted students to pursue science, teaching, or entrepreneurship as the occasion demanded. Betsy DeVos visited Harvard and appeared alongside a professor who agrees with her about school choice. That sort of thing is normal. There’s no reason to take all of the uses politicians make of academia as abuses. Careerism and pandering fuel the relationships politicians and academics pursue with one another as a matter of course. But when the use and abuse of academia is harnessed to authoritarianism, we have moved beyond the normal.

Uribe approaches the world of scholarship in bad faith. To discredit Mauricio Archila, a distinguished historian nominated, though not in fact named, to serve on Colombia’s recently organized truth commission, Uribe used twitter to denounce Archila’s scholarly publications as “libelous apologia for terrorism.” He immediately drew criticism from academics in Colombia and beyond, but the quasi-retraction Uribe offered was so muted as to be inaudible.

The ex-president lauds university rectors who make space for him or his allies, but if they make space for his political opponents, he turns to virulent denunciations. When Andrés Paris, a high-ranking FARC spokesperson, was invited to speak at Bogotá’s Externado University, Uribe’s twitter feed claimed that its rector, Juan Carlos Henao, a respected jurist with a long record of public service, including as head of Colombia’s Constitutional Court, was putting the institution “at the service of terrorist discourse.” Henao responded that the university had also welcomed allies of the ex-president, and that ideological disagreements should not degenerate into personal attack. Hot to have the last word, Uribe tweeted back that Henao and others were “seeking another Venezuela” in Colombia. When a group of law students from the University of Pennsylvania visited Bogotá in November of this year, even that occasioned a tweet in the same incendiary terms. “As I told the students from University of Pennsylvania: Colombia has 3 possibilities: radical Castro-Chavismo, moderate Castro-Chavismo, and another possibility, which is the one that Centro Democrático [Uribe’s political party] wants to help build.”

Uribe has repeatedly used the public platforms he has access to, which are many, to work against Colombia’s peace process. He campaigned for a “no” vote on the October 2016 plebiscite that asked Colombians to accept or reject accords that had resulted from years of negotiations—and “no” voters won by a very slight margin, 50.2% to 49.8%. When the Santos administration responded by reworking some of the language in the accords and going forward with a congressional vote on the changed provisions, rather than risking another ballot initiative, Uribe’s “no” side was furious. They’ve since had peace forced down their throats—and haven’t liked it.

For a year now, politicians aligned with the “no” vote have been attacking the peace process as it advances, however tortuously. Uribistas and others have tried to block each step along a complicated path toward peace, from the selection of truth commission members to the design of judicial processes to allow combatants to transition to civilian status to the reserving of congressional seats for legislators named by the FARC. Most recently, Uribe has lent his support to legislative projects in Colombia’s congress that aim to undo the accords’ provision of congressional seats for former FARC and to limit who can serve as a judge within the “Special Jurisdiction for Peace.” (JEP for its initials in Spanish). On this last point Uribe’s position includes the idea that anyone who has worked on human rights cases over the past five years would be ineligible to serve within the JEP, which Adam Isacson has usefully analyzed.

Two things fuel the juggernaut of right-wing opposition to peace in Colombia: nostalgia for a failed idea, and the country’s polarized political climate. Both owe to Cold War legacies but do not fully explain this dynamic. First, Uribe did not win the war against the FARC. His political acolytes seem to imagine that he could have won if human rights defenders had not gotten in his way. This distorts history. The second idea that fuels Uribista logic, no less distorting, is that those who seek to hold military and paramilitary actors accountable for disappearances, extrajudicial executions, and rural displacements are tainted by “Castro-Chavismo” and all sorts of other “leftisms.”

In his campaign against the “yes” option, Uribe went beyond his usual saber-rattling base to link his public persona to a whole range of far-right positions, including those of a newly aggressive coalition of culturally conservative evangelical voters. Strikingly, homophobia was harnessed to the “no” campaign, not because anyone could seriously imagine that FARC commandants cared about gay rights, but because negotiators had worked to include some provisions in the peace accords that would address violence faced by the LGBT community, and because negotiators used feminist arguments to have rape and sexual violence treated as war crimes (see Winifred Tate’s discussion in NACLA). Thus, some opponents argue that implementing the accords would weaken the place of traditional gender roles in Colombian society.

More recently, Uribe has charged that Santos’s refusal to resume aerial spraying of coca plants with glyphosate has caused more Colombians to become addicted to drugs. Internationally, he has even implied that Colombia is becoming a failed state. He has infuriated Santos’s team by insinuating that that now is a bad time to invest in Colombia—as though seeking to forestall any possible peace dividend. Again, this kind of polarization is part of a scenario familiar to people in the United States. Uribe’s script is chillingly close to Trump’s script.

There are many Colombians who oppose the peace accords—and if a voice that opposes the peace accords is necessary, then there are others worth hearing. Yet Uribe is not the only rightist who garners attention by attacking academics. María Fernanda Cabal a congressional representative for Bogotá recently insisted that the 1928 banana workers’ massacre that killed up to 2,000 people was a myth created by leftist historians. (Again, academics have responded swiftly.)

But even more important than reacting to the political theatrics of Colombia’s right wing is making space for those whose methods do not divide Colombians into irreconcilable political camps. Francisco de Roux, who will chair the truth commission, is a voice worth hearing. Juanita León, who directs the professional online group of researchers and journalists at La Silla Vacía is another. Colombian undergraduates, wherever they are studying, should be encouraged to listen to a multiplicity of positions. The challenge they face is that the longer the spotlight remains on Uribe and his political allies, the harder it is to see a way forward.

Ann Farnsworth-Alvear is Associate Professor of History at the University of Pennsylvania and co-editor, most recently, of The Colombia Reader: History, Culture, Politics (Duke University Press, 2016.)