A recent ruling to end term limits in Bolivia gives Evo Morales a green light to run in the 2019 presidential elections and beyond. 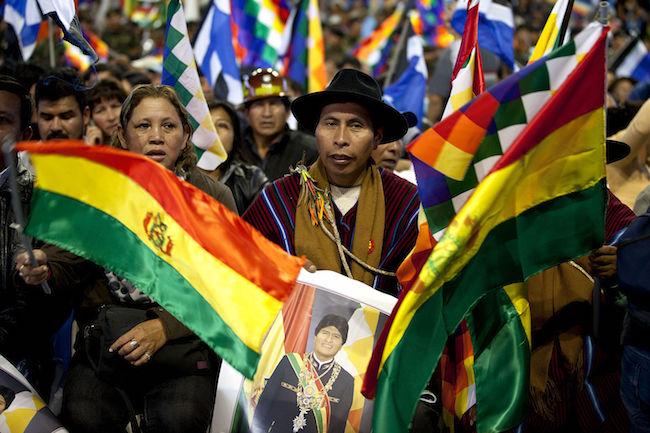 On November 28th, Bolivia’s Plurinational Constitutional Tribunal ruled that all elected officials could run for office indefinitely, rather than for the two consecutive terms permitted under the 2009 Constitution. The ruling will end term limits for the president, vice president, state governors, state assembly members, mayors, and municipal councilors. The tribunal justified its decision based on the American Convention on Human Rights’ interpretation of political rights.

The announcement has enormous implications for President Evo Morales, who has held Bolivia’s highest office since 2006, and can now seek reelection for a fourth term in 2019. The court’s move invalidated the results of a February 2016 referendum on whether President Evo Morales could run for a fourth term. A slim majority of 51.3% had voted against changing the constitution in his favor. This loss came on the heels of two other narrow defeats, in large part attributable to the right-wing opposition’s success in convincing voters that the Morales government was more corrupt than its predecessors, a claim unverified by the available evidence.

Following the 2016 vote against extending term limits, Morales and his party, the Movimiento al Socialismo (MAS) argued that the referendum didn’t represent the will of the people because a smear campaign in the weeks running up to the vote proved effective in discrediting him. The scandal involved one of his former girlfriends who worked in the government, and her child, who Morales had not recognized as his, and accusations of influence peddling involving Chinese investors. The child proved non-existent and the courts exonerated Evo from any corruption charges, although his ex-girlfriend, Gabriela Zapata, was sentenced to ten years in prison in May 2017 for benefiting personally from the contracts with the Chinese.

On December 3, five days after the Tribunal’s decision to allow Morales to run in 2019 and beyond, Bolivia held its second judicial elections. These elections have taken place since the passage of the 2009 Constitution, which replaced the previous system where political parties in the legislature divvied up the court positions between themselves. The first judicial election in 2011 led to more judges who are women and/or of indigenous origin than ever before in the country’s history.

But the 2017 judicial election became more of a litmus test of the country’s political climate than any serious attempt to select judges. This is due to an effort spearheaded by a coalition of former presidents, vice-presidents, governors, and political party leaders to urge Bolivians to cast null votes. Though 84% of the electorate voted, 51% of the ballots cast were nullified, leading the right-wing opposition to declare a victory and declare the result as evidence that support for Evo Morales is declining. This was a much higher rate of null votes than in the 2011 judicial elections, which had been widely viewed as a measure of Morales’ popularity.

After the 2016 referendum voted down Morales’ bid for another term, he initially announced that he would respect the results. However, in Bolivia, where parties typically revolve around a single leader, the MAS party has been unable to identify a viable replacement for him. Throughout his political career, Morales has eliminated opponents in his steady rise to power, which began as a coca grower and leader in the resistance against the U.S.-financed War on Drugs of the 1990s, and culminated with his ascent to the presidency in the 2005 elections.

Although 68% of the urban residents polled in late October opposed Morales’ re-election, his chances for winning another term remain high. By emphasizing his status as the only Indigenous president in the country’s history, the MAS have built a formidable base, tied to the loyalty of large swathes of the country’s indigenous peasant, neighborhood and small business organizations which propelled him to power. In 2016, the MAS party congress began investigating ways that could allow Evo to run again.

By the time of the 2016 MAS congress, several of the social movements that had once backed Morales had defected in their support of him. In a process reminiscent of the Partido Revolucionairo Institucional (PRI) in Mexico and Bolivia’s ruling party, Movimiento Nacional Revolucionario (MNR) after the 1952 Revolution, who also consolidated power for long periods in the 20th century, social movements have split in two. Social groups that remain loyal to Morales and the MAS have begun receiving injections of government funds, reflecting deepening clientelism. Several scandals have rocked the government, the most damaging of them involving theft from the Indigenous Fund, created under the Morales government to increase investment in Indigenous communities. The 2015 scandal involved dozens of MAS insiders of indigenous origin, including government ministers.

Particularly in the lowlands, controversial projects to expand extractive industries have driven opposition to Morales, including proposed large-scale hydro-electric dams that the government insists will make Bolivia a regional leader in electricity provision, as well as a nuclear power plant outside La Paz and El Alto, which together comprise the country’s largest metropolitan area. The government has also accelerated hydrocarbons exploration into national parks, which overlap heavily with Indigenous territories, and is studying potential shale gas deposits in the Bolivian Chaco for fracking. Bolivia currently has one of the highest per capita rates of deforestation in the world.

Despite evidence of voter fatigue with Morales’ face at the helm of the government for 12 years and widespread concerns that modifying the constitution signals a return to the authoritarianism that has dogged the country since its 1825 founding, Bolivia under the Morales administration remains in economic good shape. The government successfully rode the 2000s commodity boom, negotiating favorable contracts with multinationals for the sale of its abundant natural gas resources—leading to a tripling of both the overall economy and a more than doubling of public investment as percentage of GDP. Unprecedented social spending, particularly in rural areas, a stable currency, a booming economy, and the highest financial reserves per capita in the country’s history have all contributed to Morales’ continued popularity.

But this macro-economic success has come at the cost of increased dependence on extractive industries. And despite Morales’ anti-imperialist rhetoric, particularly on the international stage, foreign control over both hydrocarbons and mining in Bolivia has intensified.

Opposition on both the left and the right remains fragmented, with leaders often preoccupied by corruption charges the government has launched against them. One recent example is the case against Bolivia’s former UN ambassador, Pablo Solón, and his replacement, Rafael Archondo. Archondo assumed office when Solón stepped down from the position in 2011 in protest over over a controversial road proposal through a lowland indigenous territory. Now the director of a NGO, Solón has campaigned against the government’s plans to build the El Bala and Chepete hydro-electric dams in the country’s lowlands.

Indigenous opposition to Morales in the highlands centers in part around Felipe Quispe, an Aymara leader and longtime critic and sometimes rival of Morales. Quispe recently led a 45-day blockade of a principal road in the altiplano in an effort to remove the MAS mayor of Achacachi, Edgar Ramos, accused of corruption. “This government is a stinking cadaver,” he recently told El País. Ramos has since been expelled from the MAS, and Quispe believes he has fled the country.

Meanwhile, the main political party opposition leaders all have roots in upper-class, mostly white, elite families, limiting their ability to generate either a narrative or political program capable of appealing to a broad base of the population. But both the Left and the Right have resoundingly rejected the move to allow Morales to run indefinitely. Conservative ex-president Jorge “Tuto” Quiroga called the Tribunal’s decision in November a coup d’état. The country’s Human Rights Assembly has appealed to the public to step forward to defend democracy, while ex-president Carlos Mesa tweeted that the Tribunal’s decision has destroyed democratic guarantees. Although he denies he will run in 2019, Mesa is seen as the most viable opposition candidate at this juncture. A November 2017 poll showed that he would win against Morales in the case of a run-off by a margin of 9%. In December, he accused the Morales government of spying on him.

Heraldo Muñoz, the Chilean foreign minister, as well as the Organization of American States  (OAS) and the U.S. State Department strongly rebuked the Tribunal’s decision. Muñoz tweeted, “In Chile we respect the sovereign will of the people, whether in plebiscites or elections. To speak of the people and not respect their decisions at the voting booth is anti-democratic.”

Morales decried such pronouncements as yet another example in the long history of foreign interference in Bolivia’s internal affairs. He told a press conference in the presidential palace that the ruling “strengthens Bolivia’s democratic system because it expands rights and guarantees the stability and dignity of the country.”

In a country buoyed by 12 years of sustained economic growth and a fiercely loyal party base nurtured by the clientelism entrenched in many social movement organizations, ousting a popular Indigenous president in the Americas’ most Indigenous country is no simple task. Even as Bolivia loses ground in terms of its its formal democratic structures, long-excluded rural Indigenous sectors have gained greater participation and rights under Morales, particularly those who have remained loyal to the government. This makes the decision of who to support in the 2019 election particularly thorny for Bolivians who recognize the government’s accomplishments, but realize the price tag for its success includes widespread environmental destruction and the undermining of formal democracy.

Linda Farthing is co-author of three books on Bolivia, and writes for the Guardian, World Politics Review and Al Jazeera. Her latest report is Evo’s Bolivia: Limits of Change (2017). She is a contributing editor to NACLA.