Chile is Not Saved

Rightwing businessman Sebastián Piñera will be president in Chile, again. But a new Left movement could bring hope for the country’s political dynamic. 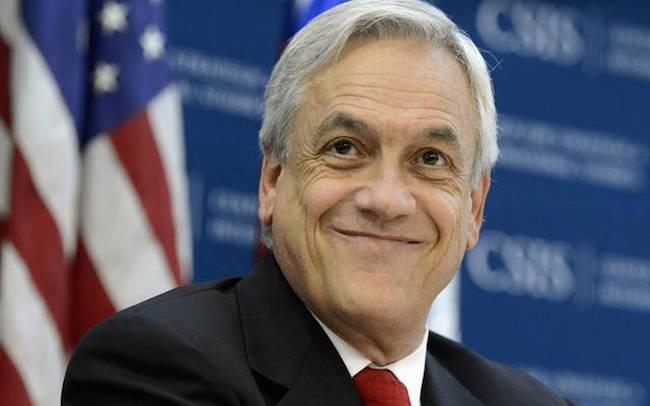 “Chile is saved! Chile is saved!” roared the crowd as rightwing billionaire, Sebastián Piñera, delivered his victory speech in downtown Santiago after being proclaimed President-elect of Chile, for a second non-consecutive term, on December 17, 2017. Piñera’s first election in 2010 made him the first rightwing president of Chile to be elected after nearly two decades of center-left rule, following the country’s return to democracy in 1990. His first term, from 2010 to 2014, which engendered a rise in social mobilizations and opposition, ended with low approval rates and a number of corruption cases currently under investigation.

And yet, in this run-off election, he achieved an overwhelming victory in the polls, with over 54.6% of the vote and thousands of supporters celebrating in the streets. His opponent, journalist Alejandro Guillier, the chosen candidate of current president Michelle Bachelet, lagged nine points behind with just 45.4% of the vote.

Piñera’s alliance with the extreme Right, which obtained a non-negligible 7.9% of support in the first round of the election, made his victory possible. So too did his promises of economic growth and a strong “battle against crime,” which allowed him to attract the broad discontent against the traditional center-left political establishment, also heavily delegitimized by corruption scandals.

“Chile is saved"—from what, exactly? What threat looming over Chile were Piñera’s supporters so relieved to escape? The answer lies in part in the use of the made-up concept of “Chilezuela”—the danger of Chile turning into Venezuela if Alejandro Guillier won. The term was repeated incessantly in social media and the mainstream rightwing-controlled press in the weeks prior to the run-off election. This fear-mongering discourse seemed absurd in the light of a candidate who was anything but a leftwing radical, and whose campaign was built around maintaining the limited reform agenda of the incumbent center-left government of Michelle Bachelet.

The alleged threat of leftwing radicalization rested, to some extent, on the surprising results of the first round of Presidential and Parliamentary elections on November 19, 2017, where the country witnessed the rise of a new leftwing force: the Frente Amplio (Broad Front). This novel coalition of 13 political movements presents itself as a more radical alternative to the traditional Center-Left who has ruled the country since the return to democracy in 1990.

As in other elections throughout the world in the past year, Frente Amplio’s results proved wrong all polling predictions, which had greatly underestimated their power. Frente Amplio’s supporters thus experienced the first-round election results in October in ecstatic disbelief: their presidential candidate, Beatriz Sánchez, obtained an impressive 20.3% of votes, only two points behind the traditional center-left candidate. Furthermore, the new leftist coalition increased its slots in Congress from three to 20, and elected a representative to the Senate. This was only possible due to the recent change from a strongly  majoritarian to a proportional voting system.

As a result, Congress, formerly divided into two majoritarian blocks, now has a third force in play. Frente Amplio’s congressional caucus represents an important generational change: only four of the 20 Frente Amplio congressmen are over 40 years old, seven of them are women, and 16 of them are debuting their political career. They share a middle-class professional background: they all have university degrees—eight of which are lawyers—while two belong to the arts world.

Given these first-round results, the only chance Alejandro Guillier had to win the run-off was to attract Frente Amplio’s voters. His campaign approached the young coalition, but its tone faltered, seeming to mix a seduction ritual with the frustrated scolding of a parent toward a rebellious teenager. Initially, Guillier’s campaign adjusted its discourse to consider some of Frente Amplio’s flagship demands: structural reform to the privatized pension system, strengthening of the public health system at the expense of private insurers, free public higher education, remission of student loan debt, and a constitutional assembly to replace the current Pinochet-era Constitution. It was this discursive opening of Guillier’s candidacy to the left that prompted the fear-mongering campaign of “Chilezuela” from the right wing.

However, Guillier’s commitment to this agenda was fraught with ambiguity, and in the effort to refute the accusations of radicalization, his discourse did not go further than what Bachelet’s government had already promised in these realms. For Frente Amplio, this amounted to settling for partial and insufficient reforms that did not challenge the neoliberal logic embedded in the provision of social rights.

As Frente Amplio’s organizations and leadership scorned Guillier’s lukewarm advances, the traditional Center-Left leadership grew increasingly frustrated and turned to reprimanding the young coalition for its irresponsible and intransigent behavior accusing them of allowing the Right to return to power. The old Left invoked the phantom of the dictatorship, the gratitude that younger generations owe to the current political leaders for living in a democratic system, and Bachelet’s progressive—if imperfect—legacy, in its attempt to persuade the new one.

Within Frente Amplio, the decision about whether or not to endorse Guillier was fraught. On one hand, it was clear that allowing the Right wing to return to power would damage the country, particularly in terms of labor rights, the social security network, immigration policies, and LGBTI and sexual and reproductive rights. Also, a possible Guillier administration would present an interesting political opportunity for Frente Amplio: his government would have to negotiate each legislative proposal with the new coalition.

On the other hand, endorsing Guillier imperiled the unity and identity of the young movement. Indeed, Frente Amplio has presented itself as an alternative to the corrupt and complacent Center-Left political establishment, which has in many ways continued the dictatorship’s neoliberal legacy. The danger of polluting this new project with the murky waters of the old political game was unbearable for many. Within the ranks of Frente Amplio’s supporters, endless debates over the “lesser evil” mirrored the discussions that took place among Bernie Sanders’ supporters during the Clinton versus Trump campaign.

In the end, Frente Amplio’s official statement toward Guillier’s candidacy was strongly ambiguous: it acknowledged the threat of a new rightwing government but claimed “no ownership” of their voters’ decision, and abstained from making a formal endorsement. The refusal of the coalition as a whole to take a stand became further muddled when some of Frente Amplio’s most renowned public figures announced their support for Guillier in the week leading up to the election.

Unsurprisingly, as soon as the crushing results in favor of Sebastián Piñera came out, the blame for Guillier’s defeat fell rapidly on the Frente Amplio. At the same time, many within the progressive forces—both new and old—were puzzled by this second result: how to make sense of an electorate which, in less than three weeks between the two rounds of the election, had first favored one of the most important renovations in Chilean politics in 30 years, and then backpedaled to elect a conservative candidate running for a second mandate?

“Chile is saved.” The fear of the left—this younger, more demanding, and less accommodating left—certainly helps explain this turnaround, and the renewed mobilization of the Right wing electorate who came out in force, increasing voter turnout and winning 850,000 new votes. Paradoxically, the triumphant Right wing was also pushed toward the center: in his attempt to capture centrist and ‘non-ideological’ voters, Sebastián Piñera finally embraced one of the most populist aspects of the leftist agenda—the state-subsidized tuition waivers for higher education.

To some extent, then, the success of the Right—and the new conditions under which it will govern—should be read as a direct reflection of the rise of Frente Amplio’s new Left. This new movement has achieved the first step, well beyond its own expectations, of becoming a gravitational force in the Chilean political landscape, and it is already determining the strategies and discourses of the two traditional coalitions.

Frente Amplio’s political role in this Right turn is quite clear: they will play their role in Congressional opposition. They will also have to support the mobilization in the streets against Piñera’s upcoming attempts at dismantling the limited, but still crucial, progressive policies achieved during Bachelet’s government. Nonetheless, in the next four years, Frente Amplio will need to learn to resolve the unavoidable internal frictions between political identity and political pragmatism in more satisfying ways than the ambiguous position it displayed during this run-off campaign.

More importantly, the new Left cannot be blinded by their dizzying new prospects, as they are still far from achieving any sort of hegemony or massive support from Chilean society. At the national level, over 52% of voters—most of them from low-income communities—abstained from participating in this last election. For instance, in Vitacura, Santiago’s richest municipality and a bastion of the Right, 73% of eligible voters cast their ballot. Meanwhile, voter turnout in La Pintana, Santiago’s poorest municipality and a traditionally leftwing district, was 37%.

This wide gap in electoral participation epitomizes Frente Amplio’s most important challenge in the years to come: engaging the majority of lower class Chileans that decades of dictatorship and its neoliberal heritage during the democratic transition have made indifferent or even hostile to political—or at least, electoral—participation. In other words, Frente Amplio needs to work with the large majority of the country in order to explore, find, and build an alternative path together, through which Chile, maybe one day, can be saved.

Marianne González Le Saux is a Ph.D. candidate in History at Columbia University and adjunct professor of Legal History at Alberto Hurtado University in Santiago, Chile.

She would like to thank Alyssa Bowen, Denisa Jashari, Javier Puente, and Josh Savala for their insightful comments on this piece.