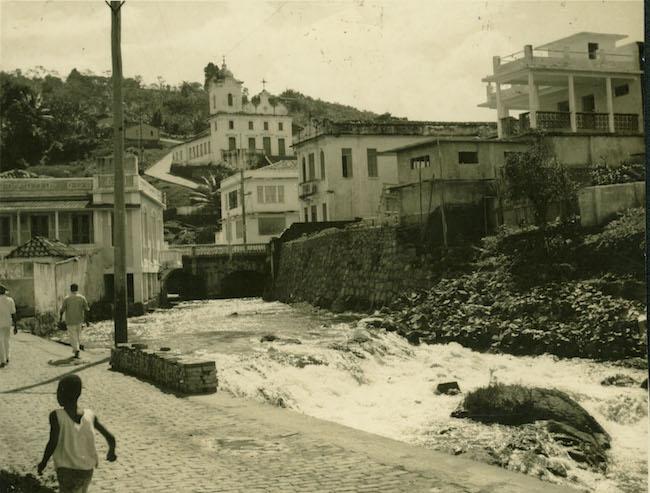 Beatriz* was born in 1939 near Ituberá, a small town on the southern coast of Bahia, Brazil. A proud Afro-Brazilian, she grew up with her parents in the hills and forests west of town. Beatriz's parents had moved to these hills in search of a way of life away from the hardships of plantation labor. They were known as posseiros, a term that translates roughly as “squatters,” who made their living from foraging, hunting, and cultivating clearings in the forest. They eventually settled on a bit of land where they mostly planted manioc gardens, but Beatriz also remembers small groves of cacao, coffee, and orange trees that her father planted and maintained. She married around 1955, at 16 years old, and left her family to live in town with her first husband. The next time Beatriz returned to visit her family in the hills, the timber company called the Industrial and Commercial Corporation of Ituberá (SAICI) had already seized control of their land.

SAICI was a business venture founded by the late Norberto Odebrecht (1920-2014) in the early 1950s. Odebrecht's arrival in Ituberá at this time inaugurated a protracted land grab between the 1950s and 1970s as posseiro families like Beatriz's were evicted from public lands that Odebrecht enclosed for himself. This long episode of dispossession was marked by violence, burning houses, and tears as Beatriz's family, along with many dozens of other posseiro families who made their living in the hills, were left landless and dispirited. In their place, the region became a site for investment in expansive rubber and cacao plantations that were established over the course of the 1950s through the 1970s. After Beatriz's parents lost their land, their children were forced to turn to plantation labor. The next 30 years of Beatriz's life would be spent working on the region's plantations.

The new generation of plantation laborers created by these dispossessions experienced a significant turn of fate in the early 1990s, as the region's cacao plantations were devastated by a new fungal disease that ruined harvests and a national economy in crisis. Together, these factors led to mass layoffs as many plantations were reduced to bankruptcy. In Ituberá, unemployed plantation laborers joined together to occupy the lands of several declining or abandoned plantations. One of these plantations contains the site where Beatriz's parents used to cultivate their manioc gardens and orchards. By the end of the 1990s, a squatter organization had reclaimed this area as part of a larger settlement called Sapucaia, where Beatriz and her second husband own a small plot of land today.

Norberto Odebrecht was not the only person involved in or who benefitted from the land grab that occurred in Ituberá after the 1950s. His business interests were intimately bound up with patronage networks involving the interests of local bureaucrats and even the patriarchs of some posseiro families facing dispossession. But many local people understand that Odebrecht played a key role in the land evictions that occurred after his arrival in the region. For those like Beatriz who still remember, the name “Odebrecht” is shorthand for dispossession and a forced return to plantation labor.

In the decades following his early business ventures in southern Bahia, Norberto Odebrecht would build an international construction company that eventually operated out of several dozen countries. After decades as one of Latin America's largest construction conglomerates and a powerful force in Brazilian public life, the Odebrecht Group has undergone a stunning decline. The fall of Odebrecht is perhaps unsurprising given that recent Brazilian history has left the names of few public figures unscathed. But for many rural people living near Ituberá, the public disgrace of the Odebrecht name has brought an unexpected moment of reckoning for those who lost their land.

When Brazil's well-known criminal corruption investigations, Operação Lava Jato (Operation Car Wash) began in March 2014, Norberto's company and family name quickly came under public scrutiny. By June 2015, Norberto's grandson Marcelo Odebrecht (1968-), who became CEO of the Odebrecht Organization in 2008, was arrested and then sentenced to 19 years of prison in March 2016. Later that same year, Norberto's son Emilio Odebrecht (1945-) reached a plea agreement with federal prosecutors and was sentenced to four years’ house arrest. Norberto did not witness any of this unfold, however, as he passed away in July 2014, only a few months after Operation Car Wash began.

The Operation Car Wash investigations, under the leadership of the Brazilian federal judge, Sérgio Fernando Moro, began as a probe into Brazil's national oil company, Petrobras. Company leaders were accused of receiving bribes from subcontractor companies in exchange for lavish construction contracts. Operation Car Wash quickly evolved into an expansive criminal investigation that implicated not only Odebrecht but many other business people, organizations, and politicians.

During testimony in a U.S. federal court in December 2016, Emílio Odebrecht, Jr. described an expansive network of kickbacks and bribes through which the company had secured numerous building contracts throughout Brazil, Latin America, and other parts of the world. Under Marcelo Odebrecht's leadership, Odebrecht had created an off-the-books unit called the “Division of Structured Operations,” or what one U.S. Justice Department official described as a “Department of Bribery.” The sole purpose of the division was to distribute bribes to government officials to rig the bidding for construction contracts. The division was established in 2006, but effectively began its maneuvers as early as 2001 by operating through numerous shell companies across multiple countries. As Operation Car Wash caught up with the division's activities, Odebrecht eventually admitted to distributing approximately $788 million in bribes that would generate $3.3 billion in revenue for the company.

As a result of these investigations, innumerable Brazilian politicians—both beloved and despised, from right to left, and at all levels of government—have been implicated, investigated, prosecuted, or convicted for involvement in the corruption scandals. To date, Operation Car Wash has resulted in the convictions of more than 150 people. More than a quarter of Brazil's 500-plus-member Congress are under investigation or have been convicted. Dilma Rousseff, Brazil's recently ousted president and member of the Workers’ Party, was quickly implicated in the Petrobras corruption scandal, as she was a member of Petrobras’ board of directors from 2003 and 2010. Rousseff denied knowledge of any wrongdoings, but may now face charges. At press time, Michel Temer, Rousseff's usurper and Brazil's current president, faced charges after prosecutors flipped Joesley Batista, former chairman of a global meat-packing company, who secretly recorded compromising conversations with Temer. In one of the most controversial rulings to date, Brazil's beloved former president, Luiz Inácio Lula da Silva, was recently convicted for receiving illegal gifts from a construction company in exchange for lucrative contracts. The alleged gift was an apartment valued at $690,000. As Lula eyes a third presidential term in the 2018 elections, the conviction is currently under appeal for lack of definitive evidence.

Public officials across Latin America and other parts of the world have been implicated in ongoing investigations that have spun off from investigations of the Odebrecht Organization. Odebrecht's network of corruption appears to have been so extensive that it will probably take years to unravel and reckon with the full scope of its fallout.

*Name changed. Names used are pseudonyms to protect the identities of those interviewed.