El Salvador’s Worst Shitholes Are ‘Made in America’ 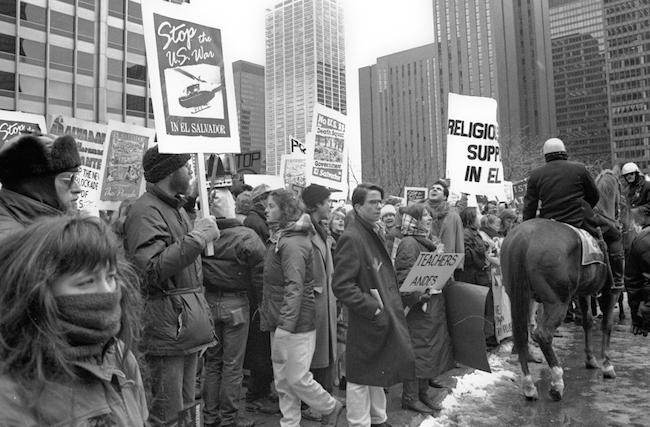 This piece was originally published in Latino Rebels.

My journalist’s hiking boots still have leftover feces and dirt from the ultimate shitholes of El Salvador: its mass graves. Many of the thousands of graves that my sources there have mapped were dug by U.S.-trained and funded security forces in the '80s. Most of the rest were dug more recently by L.A. based-gangs steadily deported to El Salvador by U.S. immigration authorities since the ‘90s.

El Mozote is the best documented of El Salvador’s thousands of mass graves, many of which remain unexcavated. Forensic experts with El Salvador’s Institute for Legal Medicine and the world renown Argentine forensic team told me that their evidence —bones, shoe marks, hair samples, bullet shells— of the mass killing at El Mozote pointed to elite Salvadoran soldiers trained in places like Fort Bragg and Fort Benning, Georgia, formerly known as the notorious “School of the Americas.” Evidence from recent Salvadoran and international court cases corroborates this. The boots, bullets, weapons, helicopters and uniforms used during the massacre were all Made in the U.S.A. And the evidence trail isn’t limited to El Mozote.

A United Nations Truth Commission established by agreement between the Salvadoran government and the FMLN guerrillas at the end of the civil war in 1992 concluded that U.S. trained security forces had perpetrated 85% of the killings of innocents during the war that left over 75,000 dead. Most of the perpetrators remain free. The forensic evidence left by El Salvador’s U.S.-trained and funded military is undeniable at El Mozote, in the murder of El Salvador’s only saint, Monseñor Romero, in the case of the 4 Maryknoll nuns raped and killed in 1980, just as it is in the cases of the tens of thousands of other, lesser-known slaughtered innocents.

The war-era mass graves I visited around an area called Panchimalco are located right next to the more recent mass graves dug by gangs in the area. Like the weapons and training used by the Salvadoran military, the gangs themselves were also born in the United States, specifically Los Angeles’ Pico Union neighborhood. I remember because I was there in the early 90s, when police of the Rampart police division —the site of the worst police scandal in U.S. history— started pushing the MS-13 and 18th Street gangs to escalate the warfare between them. The Rampart division’s well-documented tactics —planting guns for false arrests, taking a young man in gang from one neighborhood into the hostile territory of rival gangs, shooting and even killing gang members and make it seem like rival gangs did it— did much to foment violence among the gangs.

Most damaging for El Salvador and its shitholes was the way Los Angeles Police Department (LAPD) then broke sanctuary laws designed to protect people fleeing extreme violence and other disasters from deportation. In the early ‘90s, the LAPD and Immigration and Naturalization Service (INS) began the fatal practice of handing the young gang members over to the then INS for deportation. In the process, these agents of U.S. policy helped create a gang culture in a country with no history of U.S.-style gangs and gang warfare. These gangs have since gone on to fill the mass graves that mark El Salvador as one of the most violent countries on earth.

In immigration terms, the shithole is a distraction. Calling the countries shitholes, but also designating them as counties ready to both receive hundreds of thousands of deportees and lose billions of dollars sent home by them is also a logical —and tragic— fallacy, another policy failure. But if the President is going to use such language, he should back up his words with policy that recognizes U.S. responsibility for the foreign war and immigration policies that create catastrophes. In other words, I would prefer Trump walk the shithole talk—and can give him the hiking boots to do it with.

Roberto Lovato is a writer and journalist based at the San Francisco Writers’ Grotto.