The Lula conviction signals the end of an era for the Brazilian left. But it's profoundly unclear what comes next. 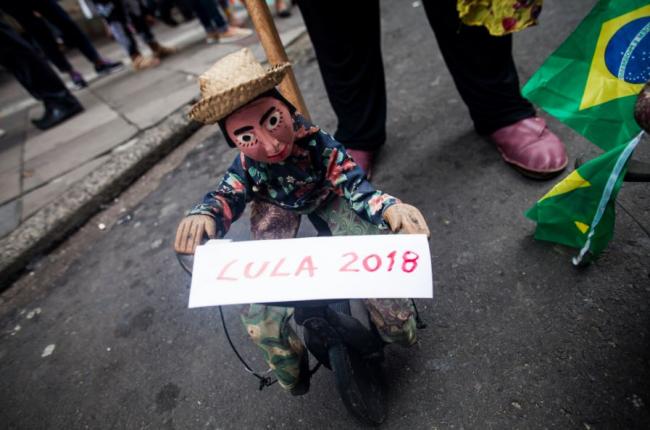 On the day of Lula’s judgment on January 24, I had a serious debate with a political leader from the Brazilian radical left, about what happened after the Workers Party (PT) came into power in 2003. He argued that the organizations of the Brazilian left needed to preserve themselves at this moment, in order to prevent the “Lulista” elite from transforming the political situation into an opportunity to revitalize Lula in the popular imagination and ensure the PT remains the only electoral option for the Left in the 2018 elections.

Though my own political leanings differ from the PT, I believed I had a political reason to think otherwise about the convictions: the defense of Brazilian democracy, a defense that overlaps with defenders of Lula.

In the heat of the debate, my friend and I exchanged words that were not very cordial. Alas, a conversation that reproduced the impatience that is all-too-common in contemporary Brazilian political discussions. I charged him with reproducing an “aesthetic” position, a beautiful image without a more concrete politics. In practice this position reinforces the image of the “post-Lula” left as sectarian and ultra-leftist. I also pointed out that his position was too indifferent to the fundamental conflicts that affect the Workers Party’s base and Lulismo and that will only increase in the near future. To me, it was pointless to defend Lula’s right to compete in the elections as a candidate yet avoid going to the demonstrations in support of this because of appearances.

In his reaction, he accused me of ceding to pressures exercised by Lulistas that transformed all political struggle into the defense of a leader, whose party and project has destroyed the hopes of Brazil’s progressive forces. He pointed to the intentional failure by leading organizations aligned with the PT to mobilize in the second general strike of 2017 against the politics of Temer.

The motive, in his opinion, is to preclude the emergence of an independent leftist politics, and that the defense of democracy will lead nowhere other than an unconditional defense of Lula. He also added that during the demonstration in defense of Lula and democracy, there was complete silence about the destruction of social security that Temer is implementing or any of the series of attacks promoted by the illegitimate government since the impeachment of Dilma Rousseff. Worse yet, PT leaders had actually been public about how the domestic and international elites should not be too worried about Lula’s possible return to power.

Almost a week later, one can see that this and other political discourses in the Brazilian left these days have come to a fragile position given the impasse we face in the construction of an alternative project to the economic and political elites of the country. We seem not to notice, even as we stand before so many attacks, the key problem of organizing a new collective will with the capacity to attract new hearts and minds in a time of crisis. Something is aging, its death fast approaches, without a new replacement that could carry the beauty of an effective and concrete political alternative.

This has been the tragedy of the Brazilian left for some years; Lula’s judgment only forces us to relive this. The indifference of the popular classes to the judgment of Lula, which was already present in Dilma’s impeachment — when it was common to find street vendors selling green and yellow merchandise to pro-impeachment protesters — is in this sense symbolic. We need to find a new path that goes beyond the dichotomy of Lulismo versus post-Lulismo. The question is: how?

Daniela Mussi is a post-doctorate researcher at the University of São Paulo and editor of October Magazine.