Puerto Rico recently announced they will privatize its power utility. Past experience shows that fixing the broken electrical system won’t be so simple. 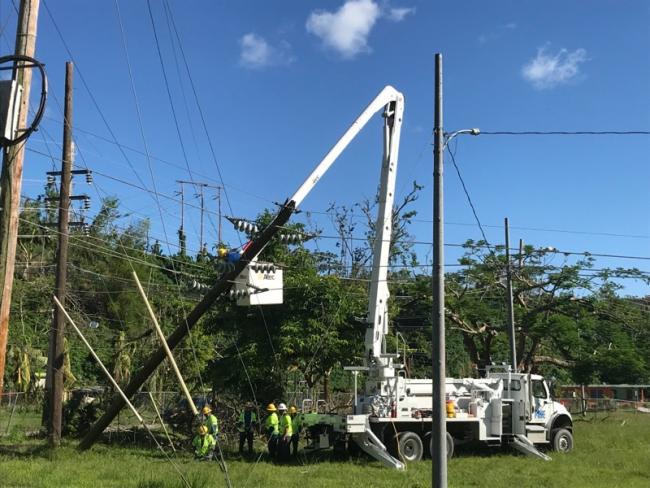 Hurricane Maria wreaked havoc in Puerto Rico, severely damaging infrastructure, knocking out power across nearly the entire island, and limiting access to basic necessities. Almost six months after the storm, there is little indication that the island is on a path to recovery. Restoring power has been particularly slow, with about 30 percent of customers still left in the dark.

The extensive damage caused by the storm—along with the slow pace of restoring electricity, and scandals surrounding the process—have highlighted the struggles and dysfunction of Puerto Rico’s Electric Power Authority (PREPA). In the aftermath of this tragedy, a narrative that fits the pattern of what Naomi Klein refers to as the “shock doctrine” hardened: government mismanagement was to blame for the state of the state-owned utility, and the only solution was privatization.

The push to privatize the PREPA is not new; governments have advocated it for decades. Earlier this month, the electrical workers’ union argued that the agency was intentionally set up for failure, precisely so that it could be privatized. Just a few months prior to the hurricane, four of the seven members of the island’s undemocratic Financial Oversight and Management Board (FOMB)— created by the US Congress in 2016 to control Puerto Rico’s finances and  tackle its long-term fiscal issues—authored an editorial that called for PREPA’s privatization. Prior to the storm, these calls failed to gain sufficient traction.

After the storm, as scandals and infighting between agencies snarled efforts to restore power, residents’ frustration grew—and backers of privatization seized the opportunity to push their agenda. When the governor announced his plan to privatize PREPA, promising that this would bring lower rates and better service, he met little resistance.

The fiscal plan the governor recently submitted to the Financial Oversight and Management Board, as mandated by the Puerto Rico Oversight, Management, and Economic Stability Act (PROMESA), does not question whether privatizing PREPA is necessary. Rather, it presents it as the only viable option. The plan claims that by privatizing the embattled utility, it will “transform” it into an efficient, reliable, and cost-effective energy provider. The proposed privatization process consists of a mix between selling assets, and offering concessions to private companies to run operations over the following 18 months.

Claims that privatization will create a quick fix to Puerto Rico’s economic and electrical woes are based on optimistic assumptions not backed by evidence. In fact, Puerto Rico’s own past experience is proof that privatization is no panacea for defective public utilities. Puerto Rico’s Aqueduct and Sewer Authority (PRASA) has twice privatized the management of water services, as detailed in a report by Puerto Rico’s Comptroller’s Office. Both attempts had disastrous results.

In the 1990s, as Puerto Rico’s water services struggled with quality and operational issues and PRASA’s finances deteriorated, then-governor Pedro Rosselló (current governor Ricardo Rosselló’s father) declared a state of emergency that cleared the way to seek a private water operator. The senior Rosselló then created a commission to negotiate a contract and oversee the privatization process. In 1995, in circumstances somewhat similar to those surrounding PREPA today, PRASA took its first step toward privatization when it entered into its first concession contract with a subsidiary of the French multinational Veolia.

After Veolia took over PRASA’s responsibilities, its problems multiplied. Service quality deteriorated and prices for consumers increased, as did the agency’s operational deficit. To make matters worse, Veolia was not complying with environmental regulations. The Environmental Protection Agency found that raw sewage was discharged into water sources, prompting fines and sanctions. PRASA was ill-equipped to oversee and enforce its contract with Veolia. For years, it complied with Veolia’s requests for increased payments, despite the questionable quality of the company’s services and its numerous violations. Puerto Rico’s contract with Veolia ended in 2001 and was not renewed.

Despite the worsening infrastructure, environmental violations, and a large operational deficit that Veolia left behind, rather than retake public control over PRASA, Puerto Rican authorities took another route. They blamed the failed venture with Veolia on the specifics of that contract, not the inherent flaws in trying to fix a system in disrepair via privatization. Problems could simply be fixed through a better-negotiated deal, they said. Thus, the search for a different utility operator started, and the government sought to negotiate a contract that would finally address PRASA’s issues. Officials bragged about the “complex negotiations” they led in order to select a contractor that would “bring operations to world-class standards.”

In 2002, PRASA entered into a 10-year, $4 billion contract with Ondeo, a subsidiary of French multinational Suez. At the time, it was the largest contract to ever be awarded to a private water company. Ondeo assumed full responsibility for maintenance and repairs of existing assets, while also promising investments to improve infrastructure and assure compliance with environmental standards. This contract was praised at the time for also including clauses to assure compliance with its stated goals, and for bringing huge expected savings to the government.

In practice, things between PRASA and Ondeo worked out differently. Less than two years later, after numerous disputes and disagreements with Ondeo, PRASA paid the company a settlement to rescind the contract. Ondeo had repeatedly requested more money than allowed by the initial agreement with PRASA, and had also failed to update the system’s infrastructure.

After the contract with Ondeo was terminated on terms unfavorable to PRASA, the agency retook control over the management of water services. This meant that a decade and hundreds of millions of dollars later, PRASA was in even worse shape than during the crisis that prompted privatization efforts. Both its infrastructure and its finances deteriorated further during this period.

In these cases, the contracts awarded by PRASA were lucrative for the private companies, but not for Puerto Rico’s government or its consumers. The companies cashed in, but not only failed to make the new investments and improvements they initially promised, but also failed to manage basic aspects of the water system, such as properly maintaining existing infrastructure.

Arguments in favor of privatization generally emphasize the perceived increased efficiency in the private sector’s ability to manage services due to profit incentives. But in the case of running a utility that is a monopoly, this dynamic does not necessarily translate into better service or savings for consumers. Rather, these case studies from Veolia and Ondeo demonstrate that a company can reduce services while raising prices. Puerto Rico’s case is not unique, but rather part of a larger global pattern of utility privatizations that have failed to deliver on their promises.

Somehow, this disastrous experience seems to have been quickly forgotten by the ardent proponents of privatizing PREPA. The governor has offered reassurance that the privatization process would take place under the close oversight of the agency in charge of regulating the utility, the Puerto Rico Energy Commission (PREC). Yet, the official plan for PREPA recently released by the government criticizes PREC, and recommends that a “reasonable regulatory process,” not PREC, be created for the future private owners. Handing over a public utility to the private sector while simultaneously calling for less regulation is concerning at best.

The common narrative blames PREPA’s operational struggles on mismanagement and corruption, and suggests that these problems can be addressed by simply privatizing the company. However, this view omits the overall context of Puerto Rico’s economic decline and shrinking population. In response to a shrinking tax base, Puerto Rico’s public sector borrowed massively to cover its expenses. Puerto Rico’s public sector accumulated about $72 billion in debt, out of which $9 billion are bonds issued by PREPA. As the island’s fiscal balance worsened in the last few years, efforts to reduce expenses meant that the island skimped on basic maintenance of its infrastructure. When the storm hit, Puerto Rico was already particularly vulnerable.

There is no doubt that PREPA is in dire need of reform, yet privatizing the utility is not guaranteed to actually solve any of its problems. Particularly given its poor infrastructure and massive debt burden, PREPA’s privatization might require concessions that would be unfavorable in the long term. As Puerto Rico’s past experiences have shown, savings promised by private operators do not always materialize. The priority now should be an overhaul of PREPA that establishes a strong and accountable regulator to oversee the process of rebuilding a more efficient and resilient electric grid to serve the people of Puerto Rico.

Lara Merling is a researcher at the Center for Economic and Policy Research (www.cepr.net) in Washington, DC.