DACA: The Agony of an Uncertain Path Forward

With DACA’s expiration date slated for March 5, Republicans are betting that Democrats will prioritize mid-term elections over the fight to protect 800,000 young immigrants. 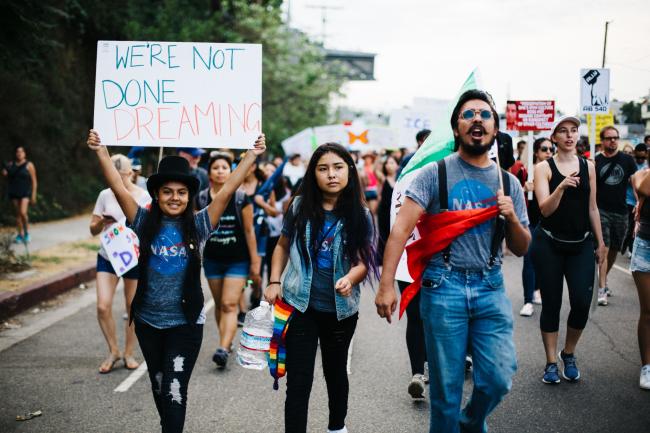 The Deferred Action for Childhood Arrivals (DACA) program, created by Barack Obama in June 2012, changed the lives of some 800,000 undocumented immigrants brought to the United States as minors. Since the program’s rescission by the Trump administration in September 2017, those immigrants’ lives, and the lives of their families, have been thrown into turmoil. And the thorny politics of immigration policy in Washington have followed suit.

With DACA’s expiry slated for March 5—barring a legislative solution in Congress that seems extremely unlikely—the federal government’s messaging has become erratic and opportunistic. One day, Trump touts the need for a “bill of love” showing “great heart.” The next, he vows to hitch the fates of the 700,000 individuals who still have active DACA status to the construction of a border wall whose only certain effect will be to increase unauthorized migration. Meanwhile, Republican Party nativists have turned DACA into a chess piece with which to extract hard-line concessions on immigration restriction from Democrats; Democrats have wavered on just how much they are willing to risk for the DACAmented, as shown in January’s abortive three-day government shutdown; and Immigration and Customs Enforcement (ICE) agents, sensing their new impunity, have felt emboldened to target immigrants’ rights activists for deportation.

On January 25, after weeks of waffling, the White House released its own framework for an immigration overhaul. It offers an excruciatingly slow path to legal status for both current DACA recipients and other DACA-eligible immigrants who never applied for the program, together a total of 1.8 million people; they would be able to seek citizenship, but only after waiting between 10 and 12 years. More importantly, however, it conditions this ungenerous excuse for DACA relief upon historic cuts to legal immigration, an end to the diversity visa lottery, new limits on immigrants’ ability to sponsor family members, and a $25 billion-dollar investment in border security, directed largely toward the construction of Trump’s “big, beautiful wall.” Analysts agree that such a wall would not effectively deter immigration. It is transparently an effort to reduce and whiten the immigrant population.

In another political moment, perhaps, the White House’s framework would be dead-on-arrival. But the GOP is betting that Democrats, keenly focused on gaining ground in the 2018 midterm elections, will be too cautious to take any major chances on behalf of DACA recipients. With another potential government shutdown approaching on February 8, the stakes are high. And thus far, there is little evidence that the Democrats will prove willing to shut down the government over undocumented immigrants, even for the DACAmented, whom the U.S. public overwhelmingly supports. Without a legislative solution, then, DACA will expire in a few weeks. Hundreds of thousands of young people will lose their livelihoods and the only homes many of them have ever known.

As immigrants’ rights activists know, DACA is imperfect. It implies that immigrants can be easily divided into those “worthy” of protection and those “deserving” of punishment. It protects young people, but withholds similar mercy from the parents who sacrificed so much to give their children a shot at a better life. It holds the DACAmented to a near-impossible standard of virtue and industry, without offering them a path toward regularizing their residency status and thus little hope of reaping the fruits of their educational and professional labor. It has siphoned attention from the precarious circumstances of the roughly ten million other undocumented individuals in the United States. And, perhaps most frighteningly, it requires applicants to disclose important personal information about themselves and their families to the federal government—information that may well be used against them.

Despite DACA’s problems, though, it still offers its recipients a crucial lifeline, one now hanging in the balance. It is not hyperbole when DACAmented individuals use the word “torture” to describe the agonizing uncertainty of their lives. Indeed, the United Nations Convention against Torture (UNCAT) defines “torture” as “any act by which severe pain or suffering, whether physical or mental, is intentionally inflicted on a person for such purposes as…punishing him for an act he or a third person has committed or is suspected of having committed...or for any reason based on discrimination of any kind.” The limbo into which DACA recipients have been cast more than constitutes, in the UN’s phrasing, “cruel, unusual, or degrading treatment or punishment.” Panic, trauma, anxiety, and depression are just a few of its common effects. And though the UNCAT stipulates that its definition of torture does not include “pain or suffering arising only from, inherent in or incidental to lawful sanctions,” anyone seeking to explain away the physical and psychological trauma suffered by the DACAmented and their families must contend with the history of U.S. immigration law, which shows that the criteria used to deem some immigrants “lawful” and others not have always been capricious, opportunistic, and profoundly racialized.

Rather than allow fear and trauma to define them, however, undocumented activists have been among the boldest and most effective forces for social justice in recent U.S. history. They have staged walkouts, blockaded streets, occupied Congressional offices, shouted their harrowing personal stories from the rooftops, organized fellow immigrants from inside detention centers, pushed legislative reform, and put their bodies on the line. DACA was their victory, won by their brave advocacy. Since then, they have worked to leverage the visibility of DACA to argue for more sweeping reforms.

With little to lose, their activism will only intensify. Millions of allies nationwide will join them, outraged that the federal government plans to use the lives of young residents as a bargaining chip. And their demand will be crystal-clear: no more Band-Aid solutions, no more temporary fixes, no more divide-and-conquer. The goal is not an extension of DACA or of Temporary Protected Status (TPS), or some other contingent outcome. Instead, the moral imperative is clear: full citizenship for all undocumented persons residing in the United States. The U.S. government has made sweeping changes to citizenship laws in the past, moving millions of people from one eligibility category to another at the stroke of a pen. There is no good reason it cannot do so again.

If there is any hope of stopping the nativist wing of the GOP from realizing its restrictionist fantasies, however, it will require a fight. To prepare, the Democratic Party would do well to learn from the tactics and chutzpah of undocumented and immigrants’ rights activists. And if Democrats capitulate and accept Trump’s false compromise on February 8, there are plenty of braver souls who will shut down the government by other means.

Kirsten Weld is the John L. Loeb Associate Professor of the Social Sciences in the Department of History at Harvard University; she is also a member of NACLA’s Editorial Committee.