Latin America's largest economy is in disarray; its Workers’ Party faces destruction; its radical left searches for a response. The second installment of our coverage on Lula’s conviction. 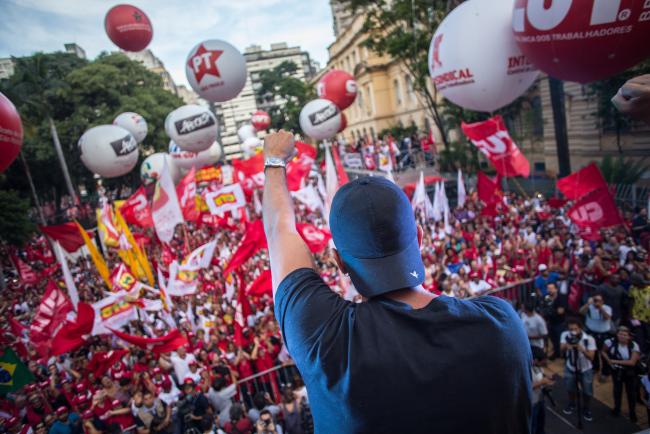 Brazil’s massive corruption probe, Operation Lava Jato (Car Wash), has found financial wrongdoing committed by both rightwing leaders from the PSDB and PMDB—including current President Michel Temer himself and Senator Aécio Neves, Rousseff’s challenger in the 2014 elections—as well as by members of the PT and other leftwing parties. Yet the rightwing-led Senate and judiciary have consistently targeted the PT over other political leaders for blatantly political reasons. Unlike the PSDB and PMDB, The PT, which led many important social programs for Brazil’s poor, presents a threat to the elite establishment of Brazil, our contributors argue.

President Dilma Rousseff’s ouster in 2016 marked a watershed moment in Brazil. So did her replacement with Michel Temer, who has become one of the most unpopular presidents in Brazilian history. Long prior and all throughout Brazil’s current political crisis, NACLA has offered extensive, comprehensive, and critical analysis of roots and consequences.  In December 2016, contributor Bryan Pitts led a roundtable in the NACLA Report titled “21st Century Golpismo,” examining a new trend of “constitutional coups” wreaking havoc across Latin America, from Honduras in 2009, to Paraguay in 2012, to Brazil in 2016. He writes:

In these cases, it was the civilian political class that plotted the president’s removal, and the role of the military ranged from secondary to non-existent. In all three countries, albeit to varying degrees, the opposition took care to cloak their removals of “troublesome” presidents in the appearance of legality, culminating in Brazil’s five-month impeachment process against Dilma Rousseff in 2016.

In each case, left-wing parties were either weakened or disenfranchised, while right-wing parties and Congress grew stronger.  Lula’s conviction follows the same pattern: using a “fig leaf of legality,” as Pitts wrote, to justify either ousting a political leader or barring them from reelection.

The following articles build on NACLA’s ongoing coverage of the Brazilian crisis. They feature:

If you didn’t yet read Part I of this forum, you can read it here.