In Mexico, Solidarity Versus the State

Many in Mexico think the government and political parties are hampering aid efforts. 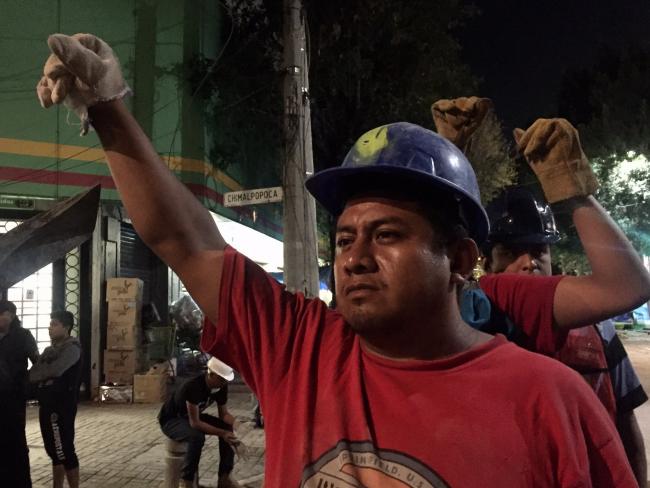 The horrifying coincidence of this week’s devastating earthquake in central Mexico, coming on the 32nd anniversary of the temblor that killed more than 10,000 people in 1985, has led observers and survivors to draw constant parallels between the two disasters. But if the corruption and ineffectiveness of the state took some by surprise in 1985, unraveling the last threads of legitimacy of PRI single-party rule, today there is no ambiguity. The truth that Mexicans came to know in 1985 has only been reinforced: once again they insist, as they have so many times in recent years, and again in recent days, fue el estado. It was the state.

In 1985, as the dust settled on demolished buildings and collapsed highways, the state was shockingly and ostentatiously absent. People called for police and fire departments that never arrived. They sought out social services that didn’t exist. Then-president Miguel de la Madrid didn’t even make a public statement for 36 hours after the quake struck, and then suppressed evidence of the mounting death toll.

So the people of Mexico City emerged to fill the void left by the state, organizing search-and-rescue and providing shelter for the displaced and sustenance for volunteer workers. Neighbors organized brigades that became the famous topos, “moles” who tunneled into collapsed buildings to retrieve victims. Neighborhood groups confederated into citywide organizations like the Coordinadora Unica de Damnificados, which called for an end to the corrupt building practices that allowed so many government buildings to fall like dominoes, and forced the federal government to provide land and resources for survivors. September 19, 1985 marked the reawakening of an insistent, democratic Mexico, surging from below to address the ossified and venal structures of power that had ruled the country for so long.

The disaster was then followed by a political earthquake, when the contested elections of 1988—in which the leftist Cuauhtémoc Cárdenas had the support of the asambleas de barrios that had formed out of post-earthquake citizen organizing—were flagrantly stolen by the PRI. As the party struggled to contain the forces of a democratic opening pushed from below since the late 1960s, it continuously exposed its own rotten core.

That persistent rot, of course, has been on full display in recent years, as the PRI returned to power with the election of Enrique Peña Nieto, whose scandal-prone administration is surely the least popular in recent Mexican history. But it has also been proven to exist in the main opposition parties, the right-wing PAN, which held the presidency from 2000 until Peña Nieto’s inauguration in 2012, and the left-wing PRD, which has been dominated in recent years by the centrist faction known as the chuchos.

The interregnum of PAN power, of course, brought the militarization of Felipe Calderón’s so-called war on drugs and organized crime, sending the military into the streets of cities and towns all over Mexico.  For many, the most visible expression of the state was these security forces, fighting their war on the streets, murdering and torturing supposed “delinquents” with impunity. In 2014, when the disappearance of 43 college students from the Ayotzinapa Rural Normal school took place in a town with a PRD mayor and a state with a PRD governor, the implication was clear: the whole political system was guilty. It wasn’t just one party. It was the state.

This is the context in which Mexicans are now coping with the aftermath of this latest earthquake, as well as the similarly devastating one two weeks earlier in the southern states of Oaxaca and Chiapas. The state and political system have provided little but frustration for residents affected in both quakes. Many point to the persistence of corruption—officials allowing shoddy building in exchange for bribes, for example—as one of the main causes of the destruction.

But efforts of the state in response to both quakes have been worrisome, as well. Just a day before the quake in Mexico City, human rights groups released a report denouncing the insufficient relief, bad coordination, and political opportunism that had marked the relief efforts for the earlier earthquake in the isthmus, alleging that local politicians were distributing aid only to party loyalists. The marines, army, and federal police have been called in to coordinate aid distribution, in order to “depoliticize” the process. But in regions where violent repression of social movements has come at the hands of those same security forces—as was the case in Nochixtlán, Oaxaca last summer, where federal police opened fire on striking teachers and then denied even having guns—the presence of such forces is an uneasy compromise.

In Mexico City and the surrounding areas, the response of the state has caused exasperation and anger. Outside the capital, in smaller towns in the state of Puebla, for example, no official help has arrived at all; citizens are left to coordinate relief themselves. But in parts of Mexico City where massive volunteer efforts got underway immediately after the quake—such as in the central neighborhoods of Condesa and La Roma, where multiple buildings collapsed—the military later arrived and cordoned off damaged blocks, kicking out volunteers and refusing to provide further information. This has created what one journalist called a “struggle” between the military and civilians, many of whom argue that the army and marines, with their heavy equipment and top-down approach, care little about finding survivors and have done nothing to communicate with those looking for their loved ones. The marines are also coming under blame—together with the PRI-aligned Televisa television network—for stoking the false story of “Frida Sofia,” the non-existent student who was supposedly trapped in a collapsed elementary school.

Elsewhere, aid collected by volunteer groups is being channeled by a state agency known as the DIF, which is headed by the first lady and the wife of the interior minister, and is nominally responsible for family welfare programs. That is, rather than distributing government aid, the agency appears to be appropriating aid collected by citizens in order to distribute it under their banner. A widely circulating video showed aid trucks arriving in Morelos from the state of Michoacán forcibly diverted by police from their intended destination to the DIF headquarters, where huge stores of supplies sat undistributed, officials said, because they did not have bags. Spreading the word on twitter, citizens quickly moved to “liberate” these supplies from the government and distribute them. Elsewhere, there have been reports that DIF officials have arrived at volunteer collection points only to box up provisions donated by citizens in containers emblazoned with the DIF logo.

Frustration with state officials and political parties is only growing, as politicians and security forces are seen not as providing resources, but diverting them. Mutual aid strategies that grew out of the experience of 1985 are being hampered, rather than helped, by state forces. Everywhere they look, among the ruins of factories, schools, and apartment buildings, ordinary people can see the evidence of political corruption on display. When politicians have shown up, volunteers have made their displeasure clear: a group chastized Morelos governor Graco Ramírez, telling him, “put on your boots and work,” while another chased Interior Secretary Miguel Ángel Osorio Chong from the site of a collapsed sweatshop in Mexico City’s Colonia Obrera.

Despite these frustrations, however, the popular organizing persists. With presidential elections less than a year away, a petition demanding that the National Electoral Institute (INE) donate the funds allotted to parties for political campaigns to earthquake relief has garnered nearly 1.8 million signatures; officials from change.org said that it created the largest jump in web traffic in the history of the site. And it has produced results: Andrés Manuel López Obrador had already proposed after the Oaxaca quake that his party, MORENA, would donate 20% of its campaign funds to victims; that amount has now been increased to 50% and other parties have joined the effort with the approval of the INE.

And on the ground, citizen efforts to collect and distribute aid continue. The outpouring of solidarity and support from ordinary people, all across Mexico, has been overwhelming, sometimes literally stopping traffic to affected areas. In an especially moving display of solidarity, the students from the Ayotzinapa Normal Rural school announced that they have sent a brigade of 150 students to help clear rubble in Puebla and Morelos.

It remains to be seen if this impressive show of solidarity will generate lasting political consequences, as it did after 1985. Ordinary Mexicans know where to direct their ire, and they have distilled their political analysis into the trenchant and persistent cry, no less applicable today than it has been over these last years of mourning, protesting, and organizing: fue el estado. If the energy poured into cleaning up their streets and feeding their neighbors is now channeled into cleaning up the corrupt political system—into remaking the state—Mexico will emerge from this disaster a truly changed country.

Christy Thornton is a WIGH Fellow at Harvard University and an Assistant Research Professor of Sociology at Johns Hopkins. She is also a member of NACLA's editorial board.