In Sunday’s presidential elections, peace is on the ballot as a new nation takes shape. 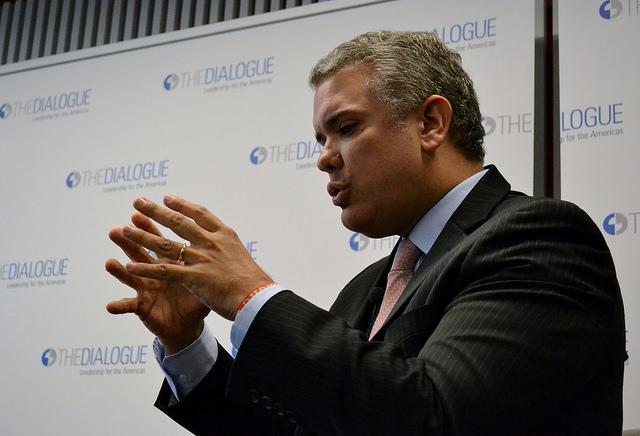 Results from the first round of presidential elections in Colombia, held on May 27, powerfully highlight the major crossroads facing peace accords signed between the government and FARC (Revolutionary Armed Forces of Colombia) guerrillas in 2016. Following a bitter race, two poles gradually emerged. On one side were those vowing to implement the peace accords alongside larger reforms, as represented by Gustavo Petro, an independent leftist candidate, and centrists Sergio Fajardo (of the Colombia Coalition, comprised of the Green Alliance Party and some sectors of the Democratic Pole) and Humberto De La Calle (from the Liberal Party). On the other side were the campaigns of Iván Duque (leading an alliance of right wing parties and factions) and Germán Vargas Lleras (Radical Change), together representing sectors who have led the country for the last 20 years and which largely reject the peace process. June 17 will witness the two candidates, said to reflect opposite pole, face off: Duque, who took 39 percent of the first round vote, and Petro, who won 25.

Behind Duque are the Democratic Center (controlled by former President Álvaro Uribe Vélez), the Conservative Party (led by former President Andrés Pastrana) allied with an ultraconservative sector led by Alejandro Ordóñez, the Party of the U (founded by Uribe as a personal political vehicle, but now led by outgoing President Juan Manuel Santos, Uribe’s former Defense Minister), the Liberal Party (under former President César Gaviria), the banking sector and the unions. In short, every living former President except Ernesto Samper, as well as the nation’s economic power brokers, back Duque. On paper, Duque’s proposals are largely limited to minor reforms of the status quo, especially around the introduction of digital technologies, a well-known promise to reduce business taxes in order to increase job opportunities, improvements to infrastructure and, as did every candidate during this contest, a pledge to fight corruption.

What does not appear on paper is how Duque’s candidacy has reaped what the campaign against the national plebiscite to ratify peace accords in October of 2016 had begun to sow: fighting “gender ideology,” preventing land restitutions, and, to the extent possible, blocking the implementation of the Special Jurisdiction for Peace as laid out in the peace negotiations. Uribe Vélez has personally overseen Duque’s campaign, and the former President has has figured far more prominently on the trail than his candidate, mobilizing people by again and again invoking Colombians’ supposed loyalty to and gratitude for his time in office. In this way, Duque also counts on the strong support of the military establishment.

For his part, Petro is a former guerrilla from the M19 movement, which renounced armed struggle and entered the political process in the late 1980s. As congressman, he denounced the ties between Uribe and paramilitaries and, after defeating Sergio Fajardo in the first round, has received support from some members of Fajardo’s Green party. Petro’s platform goes further than simply implementing the peace accords. It builds from the treaty’s guiding principles, which hold that lasting peace can only come from eliminating the conflict’s root causes. As such, Petro’s program proposes comprehensive measures to redistribute land via incentives, to transition from an extractivist to a more socially and environmentally sustainable economy—in general, to a view of the nation based on social justice and the full enjoyment of individual and collective rights. But here too there is more going on than meets the eye. Without the backing of any of Colombia’s major power and financial brokers, Petro’s wave of support has risen in the country’s plazas and streets, in social networks, in communities ravaged by war, in artistic and academic circles. In Petro, many Colombians’ hopes for change converge.

The two major losers from the first round, De la Calle (lead government negotiator of the peace accords) and Fajardo, have declared they will submit blank votes. Both candidates narrowed their field of action to a “center” that distanced itself from what each billed as two undesirable extremes for the country: “uribismo” and its opposition to the peace process, on the one hand, and on the other, Petro for what they branded as “polarizing” postures and for proposing changes they deemed too radical, potentially halting the flow of foreign investment. In fact, the support Petro received just ten days prior to the elections from some sectors of the Green Party who had backed Fajardo was conditioned on moderating some elements of his platform. At the very least, what this shows is that if peace had truly been a concern for De la Calle and Fajardo, they would have supported Petro to further its implementation and rejected Duque backers’ stated aim of blocking the accords.

One thing is certain: for the nation’s elites, the peace process has already accomplished what was in their interest, namely, opening vast swaths of the national territory to extractivist plans and mega-projects that had languished unfinished for decades. Neoliberalism in Colombia began in earnest with the 1991 Constitution, amid excitement generated by the demobilization of M19 guerrillas. Against the backdrop of the Soviet Union’s collapse, the demise of other guerrilla movements seemed a foregone conclusion insofar as their ideological referent had vanished. However, for economic elites, far from a badly desired peace to make way for foreign investment, the 1990s witnessed instead an intensification of the conflict, fed by drug money and by reconfigured battle lines following the rise of paramilitary groups, legalized in Antioquia during the governorship of Uribe Vélez.

Under the pretext of fighting guerrillas, paramilitaries became the primary driver in the displacement of millions of campesinos (estimates range from approximately five million, according to government entities, to nearly seven million according to various NGOs, displaced by the country’s 50-year civil war) and the ensuing land grab by a few owners. The failure of peace negotiations between Andres Pastrana and FARC Commander Manuel Marulanda Velezalias—“Tirofijo”— in 1999 helped turn public opinion towards ending the armed conflict at all costs.  Thus in 2000 Plan Colombia, a primarily military venture promoted by the United States government, joined the fight against narco-guerrillas, now billed as the sole enemy, turning guerrillas into the main narco-traffickers. Uribe Velez’s two presidential terms (2002-2010) saw the implementation of “Democratic Security” and “Investors’ Security” policies, both of which drew on massive military (and paramilitary) power to combat the enemy, protect extractivist operations and mega-projects, and safeguard major capital investments, all amid massacres, forced displacements, extrajudicial killings, rape, and the intimidation of civilian populations.

Led by Uribe Velez, the Right has demonized Petro, labeling him “castro-chavista”—a now standard epithet hurled against any left project, however tepid. And the campaign persistently repeats that should he win the presidency, Petro would turn Colombia into another Venezuela. What they fail to point out, of course, is that Colombia is already Colombia. In the background, and practically absent from the electoral fray, 385 social activists have been assassinated since peace accords were signed a year and a half ago. In many cases, it is men and women fighting in the defense of the environment, against extractivist projects, and for the restitution of lands or the substitution of crops. The government denies any systematic killings. The Defense Minister claims the deaths are isolated events due to disputes between neighbors or “romantic jealousies.”

Also in the background is the looming catastrophe in the Ituango Hydroelectric Dam, projected to be the country’s largest and on the verge of collapse due to faulty engineering and to pressure from investors to finish. The situation in Hidrituango aptly summarizes Colombia’s last twenty years of history, during which the war made concrete a profound and irreversible occupation of the territory and its aperture to major capital ventures.  The project was conceived in 1970, but face strong resistance from area residents who pointed out the seismic dangers in the canyon where it is located, as well as the effect on their lands and communities. Finally in 1997, during Uribe Vélez’s governorship in Antioquia, the project was greenlit and work on the dam began in 2011. That same year it was revealed that in order to “clear” the area, paramilitaries perpetrated several massacres and displaced the local population, appropriated their lands, and transferred their titles to figurehead owners who quickly sold them to the corporation in charge of the dam project. Today those communities demand that flooding of the reservoir must not go forward until the bodies of the dead are exhumed. Meanwhile, area residents have been evicted and sequestered in tents, classrooms, and gymnasiums, surrounded by police and military. They are in an immensely precarious condition and under a gag rule that bars them from speaking with media.

For its part, Petro’s platform is in no way as radical as claimed by his opponents on the Right or in the false center, which has basically proposed a continuation of the status quo but with a reordering of the political leadership. Petro does not question the country’s institutions, even though they are shot through with corruption. And though he had initially proposed calling for a new Constituent Assembly, he set aside that point in his platform, to gain support from the Green Party. Meanwhile if Duque wins, the Right will control the three branches of government, well placed to push through a judicial reform that would block entities that manage the Special Jurisdiction for Peace from operating. The accords will thus become an empty shell, full of good will, but with no chance of implementation.

And still, beyond the peace process, which for millions of victims of displacement, massacre survivors, and families of the disappeared and executed is crucial, much more is at stake. A ruling coalition of all who profit from war could unleash unstoppable repression against the most vulnerable, among them Indigenous, Afro-descendant, and campesino communities, while the support of evangelical churches and ultra-conservative Catholics likewise puts the suppression of LGBTI rights on the table.

In this context, it would be disingenuous to suppose that Petro’s mass support owes only to the implementation of peace accords and the significant social demands bound up in them. The defeat of moderates De la Calle and Fajardo, the spontaneous social media campaigns in support of a leftist candidate, as well as the backing of intellectuals at home and abroad suggest that something larger is afoot. A new, hitherto unknown nation has been revealed. A nation that understands human and environmental rights, that demands an end to decades of darkness during which an interminable war made planning for the future impossible, a nation that in Petro’s candidacy brings together continental and global concerns. For the first time in its history, popular power in Colombia is poised to match the demands for political change with the country’s social and cultural reality.

Erna von der Walde is a Colombian researcher, essayist, and translator based in the United Kingdom.

Translated from the Spanish by Alejandro Velasco.