Death and Displacement: A USAID Export

USAID has funded the Cerrejón Foundation, the charitable arm of the Cerrejón mine in Caribbean Colombia, to the tune of millions. A months-long investigation reveals its community development projects are a front tied to a long history of displacement, violence, and death. 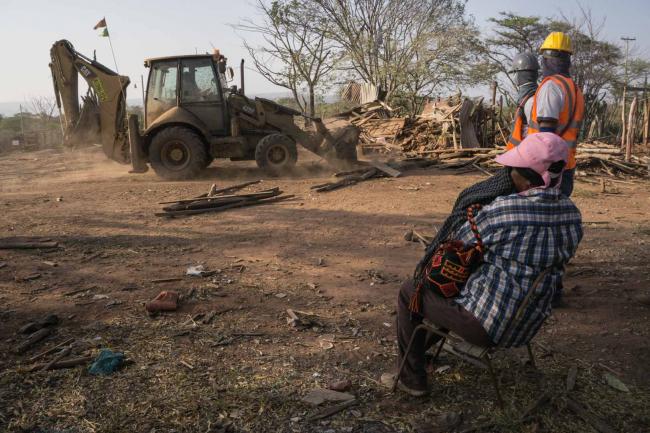 In April 2013, the northeastern department of La Guajira, Colombia was suffering its worst drought in three decades. The streams that flow down from the Sierra Nevada and Serranía del Perijá had reduced to a trickle, and the scattered wells on the already arid Caribbean peninsula were running dry. In the previous three years, thousands of Indigenous Wayuu children had died of thirst, hunger, and disease.

But when word arrived that the U.S. ambassador to Colombia would be visiting one of the farms operated by the Cerrejón multinational mining conglomerate’s charitable foundations, instructions from management were clear: do whatever you have to, just make the farm green. “It was,” said a Cerrejón foundation employee, who asked to remain anonymous, “a totally short order. Everyone had to work.”

Even at the height of the regional drought, Cerrejón’s open-pit coal mine, once the world’s largest, continued to guzzle seven million gallons of water a day. But without rain or effective irrigation, the Cerrejón foundation farm was baking under the desert sun. Funded in part by the United States Agency for International Development (USAID), the farm had never managed to produce enough food for even a handful of the 500 families it was meant to sustain. So in the weeks leading up to the ambassador’s visit, with La Guajira in the midst of what would eventually be declared a “humanitarian crisis” by the UN, the foundation sent out two trucks and a tractor to siphon water from catchments belonging to Indigenous communities surrounding the mine. “They really wanted the U.S. ambassador to see it looking beautiful,” the foundation employee explained.

Between 2008 and 2016, USAID distributed over $780,000 in direct grants and subcontracts to the Cerrejón foundation system, which has since been consolidated into the Cerrejón Foundation. The partnership ostensibly sought to “promote greater transparency in the judicial system,” “increase access to renewable energy sources,” and “improve the socio-economic status and overall wellbeing of marginalized Afro-Colombians and Indigenous communities” in the region. But a months-long investigation in La Guajira found no evidence that those goals have been advanced or seriously pursued at all.

Headquartered on mine premises, the Cerrejón Foundation claims to function independently of the Cerrejón company but makes little secret of its underlying conflict of interest. “Autonomy as such does not exist,” admitted Otto Vergara, a former foundation director. “The foundations do what Cerrejón orders.” Often, those orders not only undermined USAID’s stated objectives in La Guajira, but also helped obscure Cerrejón’s long history of displacement, abuse, and environmental degradation beneath a patina of “responsible mining.”

Take for example the Cerrejón Foundation for Institutional Strengthening of La Guajira, which received a $623,571 grant through USAID’s Afro-Colombian and Indigenous Program. NACLA obtained a regional guidebook, published by that same foundation and stamped throughout with USAID insignia, that claimed there is not a single Afro resident in a majority-black mining municipality—an easily disprovable falsehood that aligned with an argument Cerrejón’s legal team had put forward to prevent local communities from securing collective land rights.

According to numerous residents, another Cerrejón foundation project that received $150,000 in USAID funding to extend judicial protections to “marginalized and vulnerable populations” actively discouraged those very populations from pursuing legal recourse against the mine.

For the past two decades, Colombia has been by far the largest recipient of U.S. foreign assistance in the hemisphere. The USAID-Cerrejón Foundation partnership represents a small fraction of that total spending but is indicative of a deeper historical pattern in USAID’s Colombia programs, U.S. assistance to the region more generally, and the model of corporate social responsibility itself.

Corruption and the Company on the Caribbean Coast

Since colonial times, La Guajira has been perceived as hostile, godless, remote: fundamentally incompatible with civilized Western society. Early Spanish settlements on the coast struggled under constant siege from European pirates and Indigenous raiding parties. The arid interior of the Alta Guajira peninsula was abandoned to smugglers and the Wayuu, who thrived at ranching and horse husbandry, while escaped African slaves formed autonomous roches in the more verdant southern foothills.

As late as 1815, Simón Bolívar still thought of the region as unconquered territory. “Goajira,” he wrote in his “Letter from Jamaica,” would be an important “acquisition” for the future Republic of Colombia, just as soon as the “savages who inhabit it” could be subdued. But the peninsula’s relationship to the modern nation-state remains largely unchanged from the days of Spanish rule.

The second poorest department in the country, La Guajira was administered from Bogotá under the colonial intendencia framework until 1965. For decades since, national elites have been content to allow local caciques to plunder the department, provided they deliver votes on election day. Three former governors are currently serving criminal sentences of up to 55 years, including for aggravated homicide. Four more are under investigation for embezzlement, contract racketeering, and election fraud. Driven largely by contraband, the informal economy employs 85% of the labor force. As legendary vallenato composer Amilcar José Calderón Cujía put it, “in Guajira, even death arrives late.”

From its very inception, Cerrejón has been an integral part of this peculiar political economy. Soon-to-be senator Luis Carlos Galán, later assassinated at a presidential campaign rally, held intense congressional debates over “errors,” “improvisations,” and “irregularities” in the original 1975 Cerrejón concession, arguing that the terms of the 50-50 ownership split between Colombia’s state oil company and Exxon Mobil heavily favored the multinational and jeopardized the country’s long-term energy future.

The government went ahead with the partnership anyway, and after several years of exploration, the project broke ground in 1983. Since then, Cerrejón has displaced at least 15 Afro, Indigenous, and campesino communities from its 170,000-acre concessions, according to Colombia’s Center of Investigation and Popular Education (CINEP), a leading Colombian human rights group. In some cases, these displacements have been achieved through paltry buyouts, negotiated family-by-family, rather than collectively, as the 1991 Colombian Constitution requires; in others, through attrition and the steady exhaustion and contamination of farmland and drinking water; and in others still, through intimidation and forced expropriation.

The company has always worked in tandem with local government to “impose models of development, productivity, and quality of life,” wrote CINEP in a 2013 regional history. Such models, they continue, are designed to “erase the collective consciousness and cultural identity” of ethnic minorities with constitutionally protected ancestral land claims to Cerrejón’s concession zone.

“Here, the government is the Cerrejón company,” said Wilman Palmezano, a 57-year-old Afro-Colombian community leader who has spent more than a decade resisting attempts to relocate his family. “We’ve tried to file complaints, but the Cerrejón manages everything here.”

“It’s a notorious fact,” wrote Colombia’s Supreme Court, in a 2016 decision handed down in Palmezano’s favor, “that environmental and administration authorities don’t perform periodic and effective monitoring” of Cerrejón’s mining operations. Suits brought against the company on environmental and public health grounds have often failed for lack of baseline evidence. In La Guajira and other mining regions, said the late Robert Moran, a geochemist and water expert who studied mining for the Colombian Comptroller’s Office, “there is no public, reliable data that is not controlled by these mining companies. It’s like an old feudalist state.”