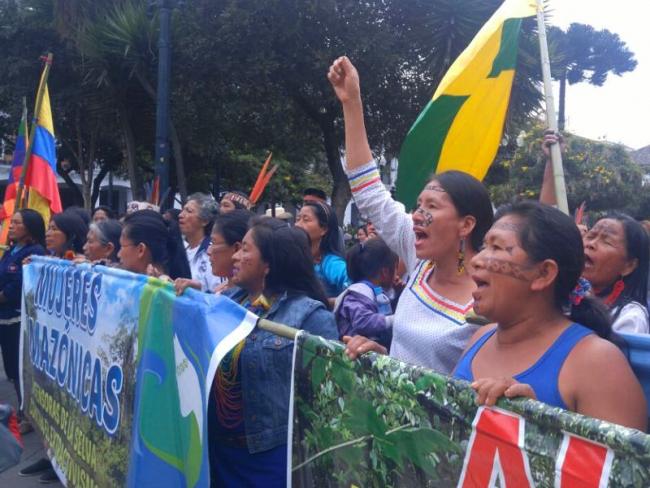 Unknown assailants attacked Salomé Aranda’s home on May 13, hurling rocks at her house and threatening her family. Aranda is a Kichwa leader in the Ecuadorian Amazon and an outspoken critic of Italian oil giant ENI, which has operated in the region for 28 years and plans to expand drilling into new fields in the so-called “Block 10” oil concession.

There is nothing circumstantial about the attack against Aranda. She belongs to the Mujeres Amazónicas Defensoras De La Selva De Las Bases Frente Al Extractivismo (Women Defenders of the Amazon Rainforest Against Natural Resource Extraction collective), and was one of the representatives who met with Ecuadorian President Lenín Moreno on March 22 after ongoing protests against the new concession. In that meeting, Aranda highlighted the social and environmental impacts of the “Block 10” oil drilling concessions, located in the Amazon rainforest 160 miles southeast of the capital city Quito. Among other demands, she and her fellow environmental defenders called on the government to cancel resource concessions in the south-central Amazon to free Indigenous lands of oil, mining, logging, and other extractive industries.

Soon after the meeting, the Italian nonprofit organization A Sud confronted ENI at its annual shareholder meeting in Italy in early May over the lack of community consent for its drilling operations in Ecuador. Days later, Aranda’s home was attacked.

In 1988, the Ecuadorian government granted the first concession for oil activities in Block 10, located in Pastaza province in the south-central Ecuadorian Amazon, to a consortium comprised of multinational oil companies AGIP Petroleum, ARCO Oriente INC, and Denison. This was at that time the only oil block created and licensed in the region.

Oil activity in the Ecuadorian Amazon began in the late 1960s in the northwestern edge of the rainforest. A pipeline was quickly built from this region over the Andes to the Pacific coast, and the oil industry—including Texaco, infamous for its decades of toxic dumping in the region and later purchased by Chevron—took hold in the region. Expansion further south began in 2003 when a second pipeline was built. Block 10’s location positions it as a gateway for new expansion into central and southern Ecuadorian Amazon.

Soon after the concession was granted, the Organización de Pueblos Indígenas del Pastaza (Organization of Indigenous Peoples of Pastaza, OPIP) and the Confederación de Nacionalidades Indígenas de la Amazonia Ecuatoriana (Confederation of Indigenous Nationalities of the Ecuadorian Amazon, CONFENIAE) began a campaign to resist the oil activities. The consequences of Texaco’s toxic dumping in the north were clear, and affected communities had not been properly consulted about the project.

At the time, the oil companies were largely able to contain the resistance by fomenting the community’s economic dependence on handouts like school scholarships and electricity lines— and threatening to take those away if the communities objected to the project, according to interviews with Salome Aranda. ARCO and the government also used divide-and-conquer tactics and promoted discord within and between the Indigenous organizations. In fact, early in the process, ARCO and the Ecuadorian government created a new, pro-oil ‘Indigenous’ federation and gave it title to some of the land within the block.

In 1999, the oil consortium completed construction of the “Villano” field in Block 10 and extracted the first barrel of crude oil soon after. In 2000, AGIP Petroleum acquired 100 percent of all shares and took complete control of the Villano field and its seven producing wells. ENI then purchased AGIP Petroleum and its assets in 2003.

In 2010, a new Hydrocarbons Law went into effect in Ecuador that required the government to renegotiate and sign new contracts with all petrochemical companies operating in its territory. ENI re-signed its contract for Block 10 in November of that year. The agreement modified the territory in the concession so that it also covered the Onglan, Moretecocha, and Jimpikit oil fields, previously part of an adjacent block. The changes to the block’s boundary affected additional areas of the Indigenous territories of the Shuar Federation, the Kichwa People of Sarayaku, the Morete, and the Achuar.

According to the Ecuadorian Constitution and international conventions on Indigenous rights, this expansion should have been accompanied by a community consultation before the new contract was signed to give local people the opportunity to approve or reject the changes in a free, prior, and informed manner. But not only did the government fail to consult the affected communities about the modifications to Block 10 and its impacts on their ancestral territories, it also failed to inform them. Locals only learned about the changes to Block 10 three years after the concession was approved, when the Ecuadorian government began a so-called socialización (roughly “informing”) process about the expansion of the extraction operations in Block 10. Local Indigenous organizations rejected the government’s “socializations” for violating the requirement that consultation and consent occur prior to approving expanded resource extraction into the territories.

For the Kichwa of Sarayaku, the violation was particularly egregious; at the time, it had the additional protection of a ruling from the Inter-American Court of Human Rights that required the government to follow strict procedures to obtain free, prior, and informed consent from the Sarayaku before any exploratory activities could be undertaken in their territory. In 2012 the Court ruled on a formal complaint filed by Sarayaku and found that Ecuador had violated the Sarayaku’s rights by pursuing an oil extraction project without consulting with the community. The Court ruled that the project led to rights abuses by company workers and the military, violated the community's right to its ancestral territory, and put the physical and spiritual existence of the community at risk by leaving over 3,000 pounds of pentolite—a dangerous high explosive used during the seismic testing phase in the search for oil—strewn throughout their territory.

At the end of 2017, ENI began to make contact with Indigenous organizations by sending written invitations to meetings to discuss plans for exploiting the Onglan, Moretecocha, and Jimpikit fields. In response, these organizations reiterated their rejection of these future plans for exploration and exploitation of the various fields encompassed in the revised Block 10.

The Shuar Federation of Pastaza, based in the same area where the Jimpikit field is located, responded to one of these invitations with a letter to the head of ENI and Ecuador’s president and secretary of hydrocarbons. In the letter, the Shuar Federation president demanded that the company “respect the will of the Shuar people to prohibit fossil fuel extraction in our territory.”

For its part, the Moretecocha Commune, which represents eight communities, decided in April 2018 to “strengthen the relationships within communities so that we can better move forward with the struggle against the abuse and discrimination by the [ENI] company over Block 10.”

And in May 2018, the Shuar community of Kumay hosted leaders and representatives from all over the region, including the Sapara Nation of Ecuador, the Kichwa People of Sarayaku, the Shuar Federation of Pastaza, the Moretecocha Commune, the Kumay Center, the Tarimiat Association, and the Shuar communities of Nanki, Pantin, Tuna, and Kawa. At this assembly, Indigenous leaders collectively declared their “absolute, radical, and total rejection of any attempt of the company [ENI] to enter [our] territory, based on our constitutional rights and the right to resist.”

Despite this kind of opposition from local communities, the Ecuadorian government has plans to auction off new oil blocks deep in the Amazon rainforest without proper consultation with affected Indigenous communities, which violates both Ecuadorian law and international standards. Originally slated for the first quarter of 2018, the government has since postponed the auction to the fourth quarter, but the plan is apparently still going forward.

Although Moreno has sought to build a more cordial relationship with Indigenous organizations than his predecessor, Rafael Correa, he has not addressed a principal driver of fossil fuel expansion into the Amazon—that is, the 11 loans deals Correa signed with China, several of which have oil-for-loan payment provisions. Since crude prices have dropped since those deals were signed, Ecuador must now provide China with even more oil to pay off its loans.

Interestingly, most of the oil itself is not going to China but to California, according to research from Amazon Watch. To that end, Indigenous leaders form the Ecuadorian Amazon, including members of the Women Defenders of the Amazon collective, traveled to the Global Climate Action Summit in San Francisco held in early September. At the summit they demanded that elected leaders, including California Governor Jerry Brown, address the impacts of fossil fuel extraction and processing from California to the Amazon.

As Mirian Cisneros, current president of the Sarayaku, said, “I come from the Amazon, and my people have long defended the rainforest from threats like oil drilling, which would destroy our forest home. We know that a majority of oil exported from the Amazon comes to California to be processed, also harming the communities near refineries and contributing to global climate change.” She continued: “To truly fight climate change and protect communities from the Amazon to California, our elected leaders need to keep fossil fuels in the ground.”

Moira Birss brings over a decade of human rights and social justice advocacy, communications and field experience to her work at Amazon Watch. For six years, Moira was the U.S. advocacy officer for Peace Brigades International—Colombia, and spent two additional years in Colombia as a Human Rights Observer. Moira's articles have appeared on NACLA, Alternet, In These Times, The Women’s International Perspective, and CommonDreams. Moira serves on the board of the Latin American Working Group and Peace Brigades International's Colombia Program.

Carlos Mazabanda has spent more than a decade working for Indigenous peoples’ rights in the Amazon. He works closely with the communities and their organizations and supports them to build their capacities via workshops and trainings on themes related to human rights and the environment. He carries out investigations of public works and policies, such as as fossil fuel and mining projects, that violate the rights of Indigenous communities—research that has been presented in international forums such as the Inter-American System of Human Rights and the United Nations.