A Specter of Dictatorship in Brazil

Little more than three decades after the end of dictatorship, Jair Bolsonaro’s win in the Brazilian elections forebodes a crackdown on democratic institutions from the university to the press to the judiciary. 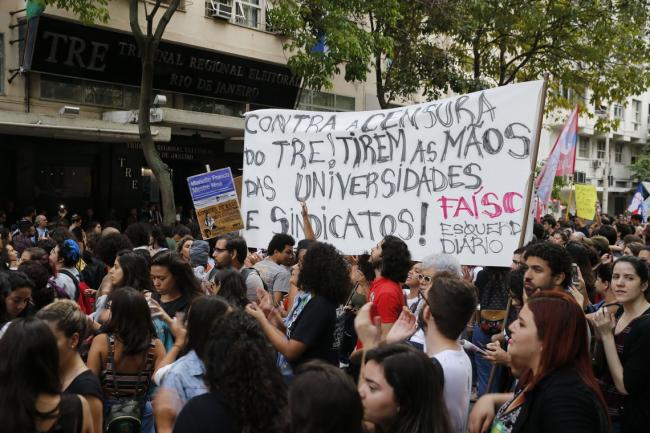 On October 28, Brazilians voted in the second round of the most contentious election since the return of democracy in 1989. As polls had predicted, the ultra-right candidate Jair Bolsonaro (PSL) beat the leftist Fernando Haddad (PT). The margin was smaller than had been anticipated, with Bolsonaro receiving 55% of the valid vote to Haddad’s 45%. There was also a record number of abstentions. Between null, blank and no-show voters, 30% of the voting population sat out the election.

Still, Bolsonaro’s decisive win did signal that a large part of the electorate was willing to embrace a candidate who has celebrated the legacy of military rule and has consistently engaged in violent rhetoric during his 25 years in congress. The campaign itself was marked by acts of violence, including the stabbing of Bolsonaro himself at a rally in early September. However, attacks by Bolsonaro supporters appear to have far outnumbered those by Haddad supporters. In the days before the first round of voting, there were 50 reported acts of violence against Workers’ Party sympathizers. These resulted in several deaths, including of a well-known capoeira master in Salvador, Mestre Moa do Katendê, whom thousands mourned publicly across the country.

Like many others living in Brazil, I watched these events unfold with a sense of dread. I am not a citizen but I am married to a Brazilian who is a voter and human rights activist. Bolsonaro’s rapid ascent in the presidential race confirmed our worst fears that if he won, endemic violence in Brazil would not only escalate but be centralized and target the political opposition. The election has also brought to light continued support for the dictatorship after 30 years of democracy. Those who have labored to build democratic institutions in Brazil since the return to democracy are all too aware of their fragility.

The Role of Social Media

Of course, the millions of Bolsonaro voters who embraced his campaign do not share this sense of dread. The degree of polarization in the political atmosphere leading up to the final vote is difficult to overstate. A meme went viral after the first round of voting on October 7 that stated “have you fought with your friends and family yet over this election?” As one of my students put it, after she told me that she had broken ties with her father over the election, “it feels as if this election has literally ripped me in two.”

In great part, these divisions reflect the outsized role of social media in the circulation of campaign materials—and how these platforms were used to circulate information that would garner support for Bolsonaro and discredit Haddad. An investigative report found that Bolsonaro’s campaign benefitted from a massive circulation of tailored messages sent through WhatsApp. The messages were not vetted by the electoral commission, as campaign ads would be, and were paid for by a consortium of Brazilian businesses, thus subverting strict limits on campaign contributions.

Thus, it’s no coincidence that 60% of Bolsonaro supporters received information on the election via WhatsApp, whereas only 38% of Haddad supporters did. Another study found that 98% of Bolsonaro supporters had been exposed to fake news and that an overwhelming majority of them believed the two most notorious false reports: that the Workers’ Party had distributed a “gay kit” in schools and that the ballot machines were rigged in the first round of voting. According to electoral observers from the Organization of American States, the levels of false statements circulating on social media were globally “perhaps without precedent.”

Meanwhile, another meme circulating among anti-Bolsonaro voters poked fun at how the relative lack of a social media presence by the Haddad campaign affected the election: “I never imagined that Brazilian democracy would depend upon the Workers’ Party learning how to use WhatsApp.”

This circulation of memes, hashtags, and fake news stories has all but stifled debate. In the first weeks of the election, nationwide protests galvanized the anti-Bolsonaro vote under the hashtag #EleNão and #EleNunca. But Bolsonaro supporters responded with other hashtags such as #EleSim and #PTNunca.

The campaign itself never got much further than these statements. Social media effectively drew voters from the sway of traditional media such as Rede Globo, which itself has often been accused of an anti-Workers’ Party bias. Bolsonaro refused to participate in the scheduled television debates, claiming that his recovery did not permit it, making this the first Brazilian election since the return of democracy to hold no debates between the final candidates. After he held an interview with the evangelical-owned media network Rede Record at the same time as the first round debate, however, it became widely assumed that Bolsonaro was avoiding possible pitfalls in debates to protect his front-runner status.

Deprived of the scheduled debates and trailing in the polls, the Workers’ Party adopted other strategies to flip voters. Haddad shed the traditional red color of the party, incorporating the colors of the Brazilian flag to compete with Bolsonaro’s appropriation of national symbols. In the lead-up to the second round, he also attempted to somewhat distance himself from Lula, who has been effectively silenced since his imprisonment in April, after making multiple appeals to not be barred from running himself. These efforts were pragmatic attempts to engage null voters, many of whom have expressed disdain for the Workers’ Party following the Operation Car Wash corruption scandal and the impeachment of President Dilma Rousseff.

Haddad emphasized the dangers Bolsonaro poses to Brazilian democracy to try to engage these voters. He underscored Bolsonaro’s repeated statements sympathizing with the military dictatorship, his declaration that he would appoint ex-military as ministers in his government and, especially, statements he had made in the past in favor of torture and state-sponsored extra-judicial killings. As recently as 2016, Bolsonaro declared that the only mistake of the dictatorship was to “torture and not to kill.” In the same year, he dedicated his vote to impeach then-President Dilma Rousseff to Carlos Alberto Brilhante Ultra, an infamous torturer under the dictatorship.

Bolsonaro made no point in hiding such anti-democratic tendencies, which in fact may be the basis for some of his popularity. In essence, the election became a de facto referendum on the legacy of the dictatorship. Bolsonaro banked on the perception that many Brazilians are agnostic about military rule and even favor the use of torture by the state. On October 21, a week before the second round of voting, Bolsonaro gave a speech to a rally of his supporters in São Paulo. Rather than voicing conciliation with his opponents, he escalated his rhetoric against Workers’ Party sympathizers, declaring that “those red criminals will be banned from our country” and, in a line that distinctly recalled a slogan from the dictatorship, “either they leave or they go to prison.”

At the same time, a video began to circulate in which Eduardo Bolsonaro, the candidate’s son and a congressman from Rio de Janeiro, declared that “it would only take one soldier and a corporal to shut the court down” if the Supreme Court were to intervene in the election results and prevent his father  from becoming president. The video, shot in July, raised the concrete possibility that the Bolsonaro campaign would consider using its military ties to suspend Brazil’s democratic institutions.

A surge of activism on the Left followed Bolsonaro’s missteps in the final days of the campaign. Social media messages urged anti-Bolsonaro voters to try to flip at least one null vote. Friends went to the central bus station every day to talk to undecided voters. Across the country, voters attempted to do the same, among family members, friends, and in everyday conversations with strangers.

In addition, the grassroots “vira voto” (flip the vote) campaign underscored the drawbacks of using social media-style communication to engage undecided voters. While the memes circulating on both sides hurled accusations and insults, as one friend put it, “it’s not possible to sway an undecided voter by calling anyone who votes for Bolsonaro a fascist. That’s a non-starter.” Instead, the grassroots campaign focused on overcoming the anti-Workers’ Party sentiment that had tarnished Haddad and focused on pinning the violent rhetoric to Bolsonaro himself, not on his supporters.

The Shadow of Dictatorship

Those who did attempt to engage Bolsonaro sympathizers on social media to try to change their minds came away sobered. Supporters appeared to favor the emotional charge of memes over the candidates’ actual published platforms. For example, a major issue for Bolsonaro supporters has been crime. But rather than considering the effect of proposals such as the relaxation of gun control or the assumption of police innocence in any killing of a civilian in the line of duty, supporters simply repeated Bolsonaro’s slogans that “a good criminal is a dead criminal” and his promise to redirect human rights to the “real victims.”

Such statements have undoubtedly contributed to increased violence against vulnerable groups. The journalist who broke the story of the pro-Bolsonaro Whatsapp campaigns has received death threats, including from Bolsonaro’s own son, and other journalists have also reported threats. Bolsonaro supporters have also physically attacked members of the LGBTQ+ community. Racial slurs and homophobic epithets have appeared on the streets and in public parks across the country. Echoing Bolsonaro’s promise to open the Amazon to development, the offices of government agencies charged with wildlife protections have been burned.

Brazilian universities have also seen the specter of the return of censorship. In a preview of what might be coming, on October 25, federal universities across the country were the target of what appears to have been a coordinated police raid. Police and electoral officials entered federal university campuses across the country and removed what they claimed to be political propaganda, citing a legal prohibition on campaigning in public universities. Among the items removed were banners declaring that the universities defended democracy and refused fascism. Police reportedly examined professors’ syllabi and shut down planned classes on fascism, claiming that they constituted veiled criticisms of Bolsonaro.

This prompted the Fluminense Federal University of Rio de Janeiro, which had been ordered to remove an anti-fascism banner from its entrance, to replace the banner with another stating “censored.” Ultimately, the Supreme Court stepped in to suspend the operation and on October 31 unanimously voted in favor of freedom of speech on campuses.

But these attacks on constitutional rights have in fact invigorated Bolsonaro’s base. One of the newly-elected congresswoman from his party has publicly called for students to film their teachers to expose examples of what she claims is a leftist conspiracy to indoctrinate in secondary schools. This claim repeats ones that have been made in mainstream media outlets and that are the basis for support for a controversial proposed bill, Escola Sem Partido (School Without Party), to prohibit teachers from taking or advocating political positions in the classroom.

We now live under this shadow in Brazil. Like other regions that have recently seen a return of the ultra-right, institutions such as the university, the press, and the judiciary have been subject to verbal attacks that forebode a future crackdown. Unlike other regions, however, these institutions have been autonomous for a mere 30 years, and are competing with anti-democratic traditions that have never been fully laid to rest.