Antiblackness and the Brazilian Elections

The ascent of Jair Bolsonaro to the highest executive office in the world’s fourth-largest democracy and former slave state reflects Brazil’s long, enduring, and foundational antiblackness. 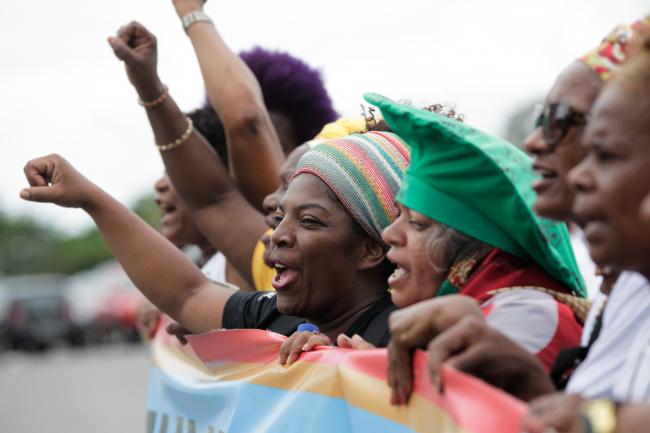 Analyses centering fascism and authoritarianism are necessary but not sufficient to explain Jair Bolsonaro’s victory in Brazil’s recent election. A little-discussed but crucial factor of Bolsonaro’s popularity is the country’s long, enduring, and foundational odium of Black people.

It is clear from the results of the latest Brazilian elections that antiblack hatred remains an effective symbolic and practical political tool. And it’s evident that Bolsonaro’s political bloc represents the intensification of the ways in which collective aversion of the most vulnerable—Black and nonblack—is expressed and condoned. After Bolsonaro’s win, a white law student celebrated the victory by pledging to kill anyone in a red shirt (a reference to PT supporters), and more specifically, to kill “all those Black people [essa negraiada, which is actually closer to the n-word],” according to Folha de S. Paulo. Evidenced in private discussions, public events, social media, and news broadcasts, this man’s perspective is not an anomaly, but rather a widely shared and defining sentiment in Brazil. It is not new, nor is it about to go away.

This sentiment dates back to Brazil’s long tenure under slavery. Brazil, of course, was the last country in the Western hemisphere to abolish slavery, and home to the largest number of slaves from Africa than any other country. An open and constant fear of Black people among White people characterized this era. In 1869, medical doctor and novelist Joaquim Manuel de Macedo, in the book As Vítimas Algozes (The Victimizing Victims), vividly described the quotidian fear that Black people would poison, rape, attack, and kill White people in their sleep. Such arguments underscored the larger dread that Blacks, the indisputable numeric majority, would take over the country and seek retribution against Whites. Enslavement was a form of preemptive, ubiquitous, and interminable violence exerted upon the enslaved to avoid upheaval and maintain the country’s social and symbolic order. Macedo’s book reflected the collective fear that the country would follow in the footsteps of Haiti’s 1791-1804 revolution and become a Black nation. Such fear, and its corresponding interminable production of antiblack terror, became an algorithm in the constitution of Brazil’s allegedly democratic multiracial experiment.

The narrative of Brazil as a multiracial society— a society that, contrary to the United States and South Africa, is supposedly free from racism—remains a powerful and effective ideology in Brazil. Yet fear of Black people, and what many White Brazilians associate them with—poverty, crime, favelas, prisons, and even the Workers’ Party (PT)—remains enshrined in institutional and social memory. Such fear is not a static historical artifact, but a shared, constantly renewed and reactivated arrangement. Any cursory analysis of death by preventable causes, such as police use of lethal force, disease (like cancer, cardiovascular ailments, AIDS/HIV), exposure to environmental toxins, and maternal and infant mortality, reveals how Blacks are disproportionately and consistently affected. Black lives do not matter because structural antiblackness is foundational, ubiquitous, and by and large unquestioned.

Although Bolsonaro´s rhetoric is explicit in its endorsement of sexism, racism, violence, and authoritarianism, the troubling fact is that state-sanctioned and systematic antiblack violence is not incidental. Indeed, it was prevalent during the so-called re-democratization period, including under Luiz Inácio Lula da Silva and Dilma Rousseff. Striking persistence in homicidal violence and police terror in predominantly Black areas reveal an irreconcilable relationship between blackness and Brazilianness. Although homicide is widespread, Black victimization is at least twice (40.2 deaths per 100,000 persons) as high as it is among Whites (16 deaths per 100,000). Between 2006 and 2016, homicide rates among Black youth increased 23.1% while homicides among White youth decreased 6.8%. Brazil is the world’s leading country in homicide by the police. Violent murders committed by officers reach levels so insidious in Brazil that the UN Commission on Human Rights has recommended that Brazil dissolve its Military Police.

The ascent of Jair Bolsonaro, an army captain, to the highest executive office in the world’s fourth-largest democracy is indicative of a foundational and structural pattern of collective and ubiquitous antiblackness. The question, then, is not so much about Bolsonaro’s real threat to democracy, but how Brazil’s democracy itself, and the country’s DNA, is coded by antiblackness. By “foundational and structural,” we mean that antiblackness, historically and contemporarily, is at the core of Brazilian social organization—its logic, symbolism, and performance.

To be sure, there are other logics and forms of hatred at play: against women, non-Evangelical Christians, LGTBQ people, and Indigenous people. Yet antiblackness is a critical feature of a social contract that intersects with, energizes, and shapes the appeal of Bolsonaro’s multifaceted antidemocratic and exclusionary agenda. The rise of Bolsonaro may be an unexpected political event, but it is fueled by a founding hatred of Black people and fear of a Black nation. This specific hatred and fear has little to do with Bolsonaro, and is indeed an original and organizing element of the Brazilian polity.

Widespread repudiation of the Workers’ Party (PT) played as central a role in the election as did the magnetism of the far-right’s appeal, both reflecting antiblackness. This repudiation was rooted in part in a rejection of the transformative social programs PT implemented—which often benefited rights for Black, Indigenous, and impoverished communities. The PT’s successive federal administrations, not to mention those at the state and local levels, are responsible for unprecedented and effective policies targeting social exclusion in the areas of nutrition, employment, income, access to consumer credit and homeownership, urban infrastructure, rural land, education, and health. Blacks are overrepresented among the most socially vulnerable, thus were disproportionately benefited by PT’s anti-poverty policies. Under the Workers’ Party, Brazil's social expenditure, particularly the Family Stipend program, lifted a quarter of the population, nearly 50.5 million people, out of poverty or into the low-middle class, expanded Black, Indigenous, and impoverished people’s access to higher education via unprecedented affirmative action policies in public and private universities, and engendered income distribution while promoting economic growth. Under Lula and Dilma, unemployment fell to historic lows.

At the same time, however, the Workers’ Party was utterly ineffective in tackling structural antiblackness. For example, not only was the PT unable to control police violence, it also encouraged and deployed the national guard and the army to police Black communities in the country’s urban peripheries. Every year the police beat their own records in terms of the number of civilians killed. In 2017, for instance, there was a 20% increase in killings by the police,  from 4,115 in 2016 to 5,144 in 2017.

So while Bolsonaro’s outspoken positions against affirmative action, against Black people, their alleged crimes and religions, and Black nations, are certainly statements about the PT’s political choices, more fundamentally they speak to the core of Brazilian antiblackness. What on the surface sounds like the typical fascist litany about the virtues of dictatorship, the unchecked monopoly of violence by the state, and the rejection of so-called “special interests” and “identity politics,” is in fact, not unlike its U.S. counterpart, the proverbial dog whistle that communicates—at a less audible but far more recognizable frequency—this foundational fear and hatred of Black people. They may be targeting the red shirts of the PT, but their real motivation, we argue, is to disenfranchise and, ultimately, exterminate Black people. The law student celebrating Bolsonaro’s victory understood this link perfectly.

Some may object that Blacks too voted for Bolsonaro, and that there were no racially homogenous voting blocks. Yet, the electoral map of Brazil reveals a clearly racially divided country. The north/northeast regions, disproportionately Black and impoverished, voted for the PT, while the south and southeast, disproportionately white and relatively affluent, voted for Bolsonaro. Yet beyond this clear pattern, the nation’s foundational and transhistorical antiblack logic permeates all social and racial groups, including Blacks themselves. Although in a much lower rate than Whites, Blacks voted for Bolsonaro because, like all social groups, Blacks are not impermeable to the political ideology that presents Brazil as a multiracial, all-inclusive society. Programmatic anti-poverty social interventions notwithstanding, PT’s utter inability and/or unwillingness to address the longstanding patterns of state-sanctioned violence against Black people attests to the country’s consensus and support for everyday structural Black exclusion and dehumanization. And while we must recognize internalized antiblackness among Black people, perhaps some of the Afrobrazilians who supported Bolsonaro recognized that PT’s call for an inclusive and multiracial Brazil was not so different than the country’s all-too-familiar genocidal ideology of racial cordiality.

Undoubtedly, the progressive administrations of Dilma Rousseff and Lula da Silva brought about unprecedented and effective social programs that benefited Black and other disenfranchised groups in Brazil. In fact, there should be no doubt either that the lawfare against Lula is a reaction to the socio-economic gains the poor he represented achieved under his administration. But they came hand-in-hand with persistent antiblack state and everyday forms of terror. In the end, both nation-building projects, the progressive and the fascist, hinge on—or at least are unwilling and/or unable to address— the nation’s constitutive antiblackness. This latest presidential election makes evident that the ideological constitution of Brazil as a multiracial nation is incompatible with Black citizenship and Black humanity—and even more so in the era of Bolsonaro. It is the specter of Haiti that remains foundational.

Jaime Amparo Alves is a visiting professor at the Centro de Estudios Afrodiaspóricos/Universidad Icesi. He is the author of The Anti-Black City: Police Terror and Black Urban Life in Brazil (University of Minnesota Press, 2018).

João Costa Vargas’s latest book is entitled The Denial of Antiblackness: Multiracial Redemption and Black suffering (University of Minnesota Press, 2018). He works at the University of California, Riverside.