The Coup Within the Coup: 50 Years After the Darkest Days of Brazil's Dictatorship

Dec 13 marks the 50th anniversary of the deadliest act issued under Brazil’s military dictatorship (1964-1985). With fewer than three weeks until Jair Bolsonaro’s inauguration, it is more urgent than ever that Brazilian society reckons with its authoritarian past. 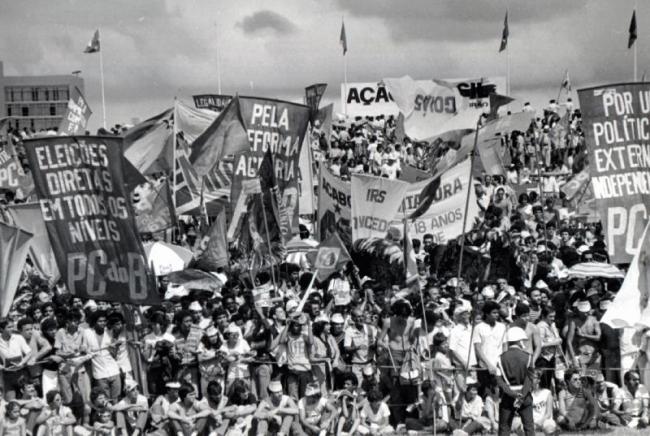 It is perhaps fitting that the inauguration of Brazilian president-elect Jair Bolsonaro, a retired army captain and right-wing extremist, nearly coincides with the 50-year anniversary of the extrajudicial decree that deepened repression and violence under Brazil’s military dictatorship (1964-1985). Bolsonaro is an open admirer of the dictatorship, and has faulted it only for not being deadly enough.

The Ato Institucional Número Cinco (Institutional Act Number 5, AI-5) was issued by then-president General Artur da Costa e Silva on December 13, 1968. The decree, often remembered as the coup within the coup, granted the president extraordinary powers. Among a number of other possibilities, it allowed him to shutter Congress as well as state and local legislatures; to remove any elected representatives at federal, state, and municipal levels; to suspend habeas corpus; and to prosecute political crimes through military courts. Despite its stated goal of defending democracy against subversion, the dictatorship's authoritarian face was revealed.

While the regime had imprisoned and tortured dissidents from its earliest days, AI-5 institutionalized the abuse of human rights. Torture thus became a common tool of the state under military dictatorship. For this reason, AI-5 is a shorthand for the darkest days in Brazil’s recent political history, the so-called anos de chumbo (years of lead), prefiguring the transnational state violence that would consume much of Latin America in the second half of the 1970s and 1980s.

Scholars have reflected on the legacies of AI-5 in various ways. AI-5 served as the legal pillar upon which political repression, with its clandestine methods of detention, torture, murder, and disappearance rested, according to an interview with historian Mariana Joffily. It lent a veneer of legality to actions utterly at odds with a democratic system and the rule of law, she argues. It was also the culmination of ongoing intra-military debates. While the vast majority of the armed forces ultimately supported hardening the regime, as political scientist João Roberto Martins Filho observes, opponents of the dictatorship and leftist forces more generally interpreted the move as a sign that the government was vulnerable, purportedly flailing in its attempts to retain control. This led to a proliferation of armed groups waging guerrilla campaigns against the regime, most of which were brutally put down in the years after AI-5.

Finally, the regime's repressive turn had crippling social effects, according to historian James N. Green, who says that the lack of political freedom in Brazil delayed the emergence of new social movements that were developing elsewhere at the time. Because of state repression or the threat of it, second-wave feminism, the Black Power movement, campaigns for LGBT rights, and environmentalism would not flourish in Brazil until the return of democracy a decade and a half later. AI-5 epitomized a violent authoritarian impulse against social agitation that has never fully disappeared from Brazilian society.

The day after AI-5 was issued, the Brazilian intellectual Anísio Teixeira, credited as the father of modern public education in Brazil, lamented the government's decision to openly rely on brutally coercive means to maintain its grip on national life. "Violence is always implicit in the actions of the Brazilian government,” he wrote in Folha de São Paulo. “Freedom was always something merely permitted to us, and could be suspended at any moment.”

Three years after criticizing the regime's authoritarian escalation, Teixeira went missing. Two days later, Teixeira's daughter received a phone call that his body had been found at the bottom of an elevator shaft in his son-in-law's apartment building. The authorities ruled the death an accident, but the family had no doubt regarding the true nature of Teixeira's passing: that he had been arrested and tortured to death for publicly criticizing the regime. Over four decades later, documents compiled by the National Truth Commission revealed that security agents had indeed murdered Teixeira and then placed his corpse at the bottom of an elevator shaft to make it appear as if he had fallen. And Teixeira was a peaceful dissident, which gives some indication of the treatment someone officially deemed a terrorist might have received. Despite the regime's claims to the contrary, those who took up arms against the government were not the only ones with reason to fear the reach of AI-5.

The fact that Bolsonaro won the presidential elections in late October as an apologist for dictatorship is a clear illustration of Brazil's incomplete reckoning with its dictatorial past, and particularly with the state terror that was carried out under the auspices of AI-5. While AI-5 became synonymous with official violence for an entire generation of politically-active Brazilians, Bolsonaro seems eager to personally assume that grim association today. His election demands renewed attention to how the authoritarian impulses that undergirded AI-5 live on in Brazil in 2019.

In 1964, four years before Costa e Silva issued AI-5, the Brazilian armed forces, with support from the United States government, removed democratically-elected president João Goulart from office, asserting that the left-leaning Goulart—either through incompetence or ideological extremism—posed a threat to the nation. The dictatorship that followed persecuted, arrested, and tortured opponents from its earliest days, although it diligently sought to preserve the appearance of democracy. By early 1968, however, opposition to the dictatorship was reaching a fever pitch with students and labor unions taking to the streets against the undemocratic regime. Against this tumultuous backdrop, the generals in power presented AI-5 as a means of preserving a besieged democracy, an incongruous notion since the act eliminated many of the basic rights of citizenship.

Unlike Chile, where most of the dictatorship's domestic victims were executed or disappeared within the first few years after the 1973 coup, in Brazil, a democratic charade persisted for the regime's first four years. After 1968, state violence crested as a direct result of AI-5, resulting in the death or disappearance of 434 people, which does not even include the vastly greater number of individuals arbitrarily arrested and tortured. In 1988, with the promulgation of a new national constitution, the emergency powers AI-5 attributed to the executive were finally revoked.

Some in Brazil, including academics and leading politicians like Bolsonaro himself, argue that the repressive toll of the regime was in fact relatively light. They argue that the Brazilian case hardly compares to Chile, for example, where over 40,000 were killed, tortured, or imprisoned under the dictatorship of Augusto Pinochet (1973-1990). Pinochet's government also played a lead role in the institutionalization of Operation Condor, a covert intelligence-gathering and assassination program that enabled Latin American dictatorships to hunt down opponents across borders. However, although comparing the tragic statistics of Cold War southern cone dictatorships is perhaps tempting, doing so as a way of adjudicating which regime was "less worse" misses the point. Regardless of how Brazilian numbers compare to Chilean or Argentine ones, the authoritarian inclination that AI-5 channeled with lethal efficiency has never disappeared from Brazilian society. In the figure of Jair Bolsonaro, it has found renewed political currency. State violence is not a relic of the past but an urgent crisis to be confronted.

As Brazil prepares to embark on a radical right-wing experiment, it is worth remembering the last time the nation embraced violence and intimidation as official state policy. Bolsonaro has promised to eradicate crime by institutionalizing state violence if necessary—that is, by granting Brazilian police, already one of the most deadly in the world, the ability to kill with even fewer constraints.

But few voters would have taken his violent solutions seriously, nor seen him as a legitimate candidate, were it not for the gradual rehabilitation of the dictatorship in the public consciousness. It’s been 33 years since military rule ended in Brazil. And as painful memories of that period recede into the past, associated most acutely with the violence ushered in by AI-5, the regime’s hard edges have softened, helped along by a new wave of conservatives who have sought to counter what they see as the leftist stranglehold on Brazilian political life over the last decade and a half.

Bolsonaro, like the architects of the 1964 coup and the ideologues behind AI-5 before him, uses the extirpation of corruption and subversion as fuel for his political machinery. By granting an unelected dictatorial regime the power to suspend the democratic rights of its citizens, AI-5 did to Brazil what Operation Condor did for Latin America as a whole. Bolsonaro has the benefit of having been elected. As the anniversary of AI-5 comes and goes, we can only hope that his government and Brazilian society as a whole consider the perils of a state unmoored from its obligation to provide for the dignity and security of every single one of its citizens, not simply those who support the government.