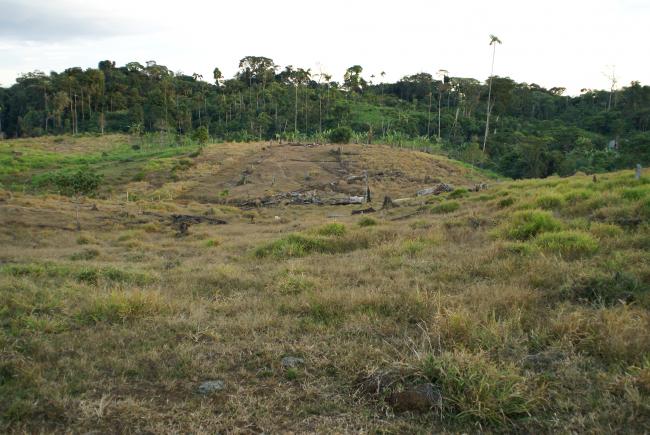 On October 12, the Colombian government kicked off a pilot program of aerial fumigation of coca crops via drones in Antioquia. The initiative lasted 45 days and the drones only fumigated three to four hectares a day and had to be manually transported between sites, according to Luis Pérez Gutiérrez, Antioquia’s governor. In a written letter to Colombian President Iván Duque, Gutiérrez instead proposed the use of “precision helicopters” capable of fumigating up to 200 hectares a day. This request comes in the context of the Trump administration’s ongoing pressure on the Colombian government to crack down on coca production through short-sighted aerial fumigation and forced eradication policies, which threaten to jeopardize the historic peace agreement signed in 2016.

In 2017, the Trump administration threatened to de-certify Colombia, placing it on a blacklist of countries who he has deemed are not adequately targeting the global drug trade. Countries that are decertified face a range of U.S. sanctions, including the suspension of all U.S. foreign assistance not directly related to anti-narcotics programs. This would also include suspending all assistance related to the peace accord.

President Duque said that he is committed to tackling the issue by “air, sea, and land” with the help of the United States. This aggressive anti-drug rhetoric continues the approach of Plan Colombia, the failed counternarcotics strategy that defined U.S.-Colombia relations between 1999 and 2015. Under Plan Colombia, U.S. taxpayers contributed to the financing of widespread human rights violations by the Colombian armed forces and funneled money to paramilitary death squads responsible for the conflict’s most heinous atrocities. Part of the program involved aerial fumigation, or the spraying of glyphosate—a Monsanto product declared to be “probably carcinogenic” by the World Health Organization in 2015—throughout the Colombian countryside as a way to destroy coca plants. The U.S. apportioned $10 billion to Plan Colombia, costing thousands of Colombians their lives, homes, and livelihoods, but failed to make a dent in the drug trade. Widespread research and statistics have repeatedly proven that supply-side eradication programs like aerial fumigation do not work.

Former Colombian president Juan Manuel Santos ended the program in 2015 due to reports of health impacts, pollution, community displacement, and that fumigation was destroying food crops. Research has demonstrated that aerial spraying with glyphosate has had detrimental impacts on health, communities, and the environment in Colombia. Indeed, respiratory problems, miscarriages, and contamination of soil and water sources persist in the country today. In April 2017, after the World Health Organization’s declaration, the Colombian Supreme Court prohibited aerial spraying of glyphosate on illicit crops.

According to Pedro José Arenas, a coordinator with the Observatory for Illicit Crops, the Colombian government has also used glyphosate to destroy legal crops in regions where coca plants are cultivated, affecting the health of the communities, displacing them from their land, and later using the land for extractive industries or large-scale African palm oil plantations. Fumigation has been the perfect pretext to militarize these regions and apply strict social controls on the population, Arenas says. Military units restrict residents’ mobility within their own territory, and have been known to arbitrarily detain leaders, and in some cases commit extrajudicial killings.

Before leaving office, the Santos administration greenlighted the drones fumigation program, going against stipulations made as part of the country’s historic peace agreement, signed in late 2016, which created a voluntary crop substitution pact with Colombian farmers. The pact intended to target the socioeconomic roots of coca production, subsidizing the voluntary substitution of illicit crops, such as coca for legal alternatives. Duque has stated he plans to expand aerial fumigations in his drug policy agenda—a move the U.S. administration celebrated—dovetailing with Trump’s call for renewed eradication.

The National Comprehensive Program for the Substitution of Illicit Crops (PNIS) is one of the cornerstones of the Colombian peace agreement, aimed at putting an end to the country’s 53-year armed conflict. The substitution program is part of a broader rural development agreement aimed at alleviating the social and economic inequities that led to the armed conflict. This alternative strategy sought to work hand-in-hand with small growers and rural communities across the country to manually eradicate coca plants.

However, according to Juan David Mellizo Ruiz, spokesperson for the Integration Committee of the Colombian Massif (CIMA), in communities like Tambo, Cauca, of the 1,447 families who eradicated their crops, since the program began in early 2017, only 87 have received their initial bimonthly payment and only 35 have received their second. The subsidies would be followed by government infrastructure projects to help small-scale farmers get their new products to market.

Many communities support voluntary substitution, even while armed groups try to discourage small-scale farmers from entering agreements with the government. In the last 18 months, paramilitaries have assassinated 38 leaders from the National Coordination of Coca, Poppy and Marijuana Growers (COCCAM), an organization that is in favor of the substitution program. One of these leaders was Iber Angulo, who was recently killed in the Naya River in a case that garnered international attention.

Yet attempts to derail Colombia’s voluntary substitution efforts in fact go much further back. In 2015, U.S. Ambassador to Colombia Kevin Whitaker published an op-ed in El Tiempo that declared: “The majority of reduction in coca cultivation is due to aerial spraying,” while citing the health of Colombia’s rural poor as, at best, a secondary concern. A year later, a month after becoming Colombia’s Attorney General in 2016, Néstor Martínez met with then-U.S. Attorney General Loretta Lynch. Immediately after the high-level meeting, Martínez publicly advocated for the return to aerial fumigations with glyphosate in Colombia. Martínez’s stance came despite the knowledge that securing a peace agreement with the FARC would hinge on the approval of voluntary manual eradication program.

Now that Duque has threatened a return to aerial fumigations, many families that have signed up for the substitution program are fearful. This plan goes along with a new stipulation that would reduce eligibility for families to be part of the program, from those cultivating up to 3.8 hectares of coca to those cultivating just 1.78 hectares, with harsher criminal charges if they fail to eradicate within 60 days. This reduction would restrict thousands of families from signing up for the voluntary eradication program.

Many families in Colombia’s coca-growing regions were already wary of the program, and without government support, it will likely suffer further. According to Diego Rodríguez, a COCCAM representative from Argelia, Cauca, without government investment in infrastructure, switching to other crops is not feasible for the country’s coca farmers. Nearly 80% of Argelia’s infrastructure was built thanks to the income produced by selling coca crops, the only viable economic alternative for many of the region’s families, according to Rodríguez. “Coca built our schools, our roads, our bridges,” Rodríguez said. “There is no investment in infrastructure. I can’t carry hundreds of plantains down the mountains to put food on the table. If my son gets sick, I can’t wait six months for coffee crops to grow.” He continued: “Now the government wants to eradicate without investing in alternatives or providing technical assistance. Meanwhile, 38 of our members have been killed since the [peace] agreement.”

Three days later, an observation mission of human rights defenders and journalists traveled to the site of the massacre. According to Santiago Mera, a member of the Inter-Church Commission of Justice and Peace who traveled with the mission, when they attempted to cross into a blocked-off area to find information about one of the young men who had died during the massacre, state security forces began firing at them. The incident led to an official apology from former Colombian Vice President Óscar Naranjo, but so far not a single member of the state security forces has been held accountable for the extrajudicial killing of eight unarmed protesters. As Mera says, “these kinds of deadly confrontations are bound to increase if the Duque administration decides to backtrack on voluntary eradication.”

Evan King is a human rights accompanier with Witness for Peace, which provides physical and political accompaniment to grassroots movements advocating for justice and sustainable economies in the Americas. He is a William and Mary graduate in International Relations and Latin American Studies.

Samantha Wherry is a human rights accompanier with Witness for Peace, which provides physical and political accompaniment to grassroots movements advocating for justice and sustainable economies in the Americas. She graduated from Loyola University Chicago with a degree in International Studies and Peace and Conflict Resolution Studies.