Women Rising in the Americas 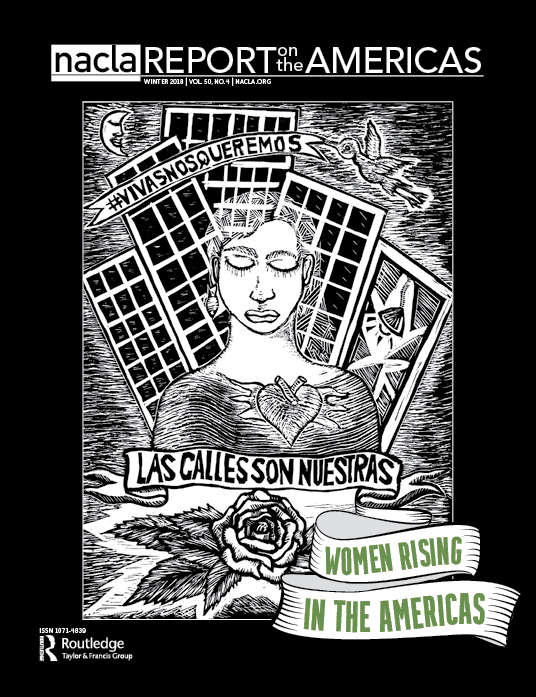 This issue of the NACLA Report is written, illustrated, and edited by a constellation of women from across the Americas. The essays and articles herein represent different facets of women’s organizing and movements from north to south: from daily resistance against anti-Black state violence in Brazil to the swells of women in green handkerchiefs taking and holding space in Argentina; from Ixil women’s central role in rebuilding communal structures in the wake of genocide to searches for the disappeared in Northern Mexico.

Sisterhood, friendship, and love motivate us to come together and to gather strength so that we can live and rebel against the rot of capital, patriarchy, and nationalism. Women, understood as those who self- identify as such, stand for life in the broadest sense, for human and more-than-human life, for rivers and forests, for clean water and air. We stand shoulder to shoulder in defense of our ability to make choices about our own lives: from our right to choose to become partners or mothers, to our right to exist-in-movement.

Women today are actively creating revolutions, according to veteran organizers Verónica Gago and Raquel Gutiérrez Aguilar. In their piece in the issue, they look at how women’s voices, bodies, and actions break and rupture the status quo in our daily lives and in public spaces in towns and cities throughout the hemisphere, framing the issue with an urgent call to the ongoing uprising of women in Latin America.

From there, our other contributors write about forms of resistance in different contexts: from the soccer field, as Brenda Elsey recounts in her discussion of women athletes from Jamaica to Argentina fighting for justice on and off the pitch; to the streets of Bogotá, where Julia Zulver reports on an Afro-Colombian women-led collective challenging white supremacy, police abuse, and sexism. Christen Smith reflects on how these kinds of abuses disproportionately affect Black women in Brazil, and how activists are reframing how we think about trauma. And an interview with musician and rapper Ana Tijoux, conducted by Hiba Bou Akar and Roosbelinda Cárdenas, traces how performance is a form of solidarity that creates South- South ties of resistance.

A central theme in this report focuses on connections to the land as crucial to women’s organizing, as Hilda Lloréns and Ruth Santiago argue. They shed light on an eco-socialist collective in Puerto Rico that has helped rebuild after Hurricane Maria and promotes a community relationship to nature. Marxa Chávez and Claudia López write from Tariquía, Bolivia, where a women-led struggle against oil exploration is challenging state union structures and power-brokers. Amid ongoing repression against Maya Ixil communities, Gladys Tzul Tzul shares her insights from Guatemala into the power of collective work on the land—often led by women—in building strength and memory. And issue co-editor Dawn Paley examines how, in northern Mexico, family members of the disappeared, led by women, search desert plains for the thousands killed or disappeared over the course of Mexico’s decade-long war on drugs.