As far-right neo-fascist Jair Bolsonaro takes office in Brazil, the radical changes his administration proposes could set off a wave of state-sponsored violence, plunder, and environmental destruction. 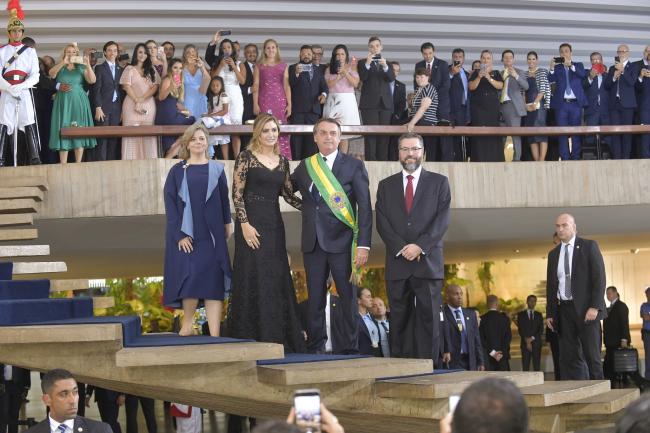 Jair Bolsonaro took power in Brazil on January 1, declaring the country’s “liberation from socialism, inverted values, the bloated state and political correctness.” The crowd before him reportedly chanted “our flag will never be red,” a reference to communism and the flag of the left-wing Workers’ Party (PT), and Bolsonaro chanted along with them.

Just hours after he was sworn in as President, one of Bolsonaro’s first acts was to strip the Fundação Nacional do Índio, (the National Indian Foundation, FUNAI) of much of its authority to demarcate and declare protected territory for Indigenous reserves. He shifted that authority to the Ministry of Agriculture, according to Folha de S.Paulo. The move ominously foreshadows a comprehensive assault on native peoples and the Amazon, and along with a series of other radical changes, could set off a wave of state-sponsored violence, plunder, and environmental destruction.

A Team of Extremists

Jair Bolsonaro takes office with aggressive plans for a multi-pronged assault on the environment. Judging from the makeup of his cabinet, it appears that the Bolsonaro government’s top priority is to advance the interests of agribusiness, mining, and fossil fuel extraction. Under Bolsonaro, Ricardo Salles, a man who has called climate change “secondary” and says that agribusiness is “under threat,” will be Minister of Environment. As São Paulo’s former environment minister, Salles has been accused of altering maps along the Tietê River to allow mining companies to operate in protected areas. He has also denounced the fines that various companies have had to pay for violating environmental laws, claiming they were issued with “ideological character.”

The pick of Salles is a logical one for the new president. Bolsonaro has promised to rip up protected areas in the Amazon and gut other areas protected for Indigenous communities. Salles reportedly came at the recommendation of Bolsonaro’s incoming Minister of Agriculture, Tereza Cristina Dias, herself the former president of an agribusiness lobby. Conservationists have dubbed her the “muse of poison” because of her support for weakening regulations on pesticides.

During his campaign, Bolsonaro had proposed to merge the environment and agriculture ministries, a move widely seen as an attempt to defang any environmental oversight. He also threatened to abandon the Paris Climate Agreement. Some speculate he has since somewhat backtracked on both of these promises because such brazen attempts to eviscerate environmental protections could subject Brazilian soy and beef interests to retaliation from Europe.

Outgoing Minister of Environment Edson Duarte and Minister of Agriculture Blairo Maggi both opposed merging the two ministries, issuing statements shortly after Bolsonaro’s election against the proposed merger, suggesting that it would penalize agribusiness abroad. “The national economy would suffer, especially agribusiness, in the face of possible trade retaliation on the part of importing countries,” Duarte said.

Maggi’s opposition in particular is notable, as he was once known as the “Soy King,” presiding over a vast agribusiness empire. Even for him, gutting the Ministry of Environment is too radical. He said in a statement that Brazilian agribusiness could lose sales in Europe. Others agree. Brazil “will pay the price when markets are closed for our commodities,” wrote Observatório do Clima (The Climate Observatory), a Brazilian non-profit environmental network, in response to Bolsonaro’s threat to the Ministry of Environment.

Nevertheless, Bolsonaro’s appointment of Salles signals his intention to make the environment ministry a de facto subsidiary of the agricultural ministry, which will now essentially be run by agribusiness interests. Similarly, Bolsonaro’s transition team wanted to bring the Institute of the Environment and Renewable Natural Resources (IBAMA), which polices the Amazon and works to disrupt deforestation, under the purview of the executive branch rather than the Ministry of Environment, yet another attempt at removing any checks standing in the way of agribusiness. Bolsonaro blames IBAMA for creating an “industry of fines” and promised to rollback financial penalties for environmental violations.

Bolsonaro’s choice for foreign minister is Ernesto Araújo, who has said that climate change is a plot by “cultural Marxists” to suffocate the economy. The foreign ministry announced in November that it would not host the 2019 COP25 climate talks, despite Brazil having won the bid just a few months earlier.

Finally, Paulo Guedes, Bolsonaro’s top economic adviser, assumes power at the ministry of the economy. Guedes has indicated he will move quickly with a radical plan of austerity, corporate tax cuts, and sweeping privatizations. In a November interview with the Financial Times, he suggested he will implement a dose of shock therapy similar to that seen in Chile during the rule of dictator Augusto Pinochet. “The Chicago boys saved Chile, fixed Chile, fixed the mess,” he told Financial Times.

Guedes will head up a newly consolidated ministry, which will merge with two other economic ministries to create a single powerful entity, giving him vast authority over how corporations interact with the environment. He has expressed a desire to do away with environmental impact assessments that hold up major infrastructure projects, according to Mongabay.

Guedes favors aggressive privatization of state-owned companies, but details on specific plans have been scarce. Notably, Bolsonaro has pushed back on selling off Petrobras and Electrobras. The long list of retired generals supporting Bolsonaro have opposed selling off “strategic assets,” including state-owned energy companies.

There is a clear and coherent logic in how Bolsonaro has set up his government. All of the pieces fit together. He has built a team that will comprehensively work to gut environmental protections and launch an all-out assault on the Amazon in pursuit of corporate profits.

This toxic cocktail foreshadows a frightening potential for wholesale slaughter of Indigenous communities and the rural poor. Bolsonaro has already promised to increase the level of state-sponsored killing in order to curb crime, in the same vein as Pilipino strongman Rodrigo Duterte. A week before the election, Bolsonaro issued a chilling video address to his supporters, shouting threats and promising to either drive opponents out of the country or throw them in jail. He took a particular interest in the Movimento Sem Terra (Landless Worker’s Movement, MST), referring to them as terrorists. “These red outlaws will be banished from our homeland,” he said in the address. “It will be a cleanup the likes of which has never been seen in Brazilian history.”

He has compared the Amazon to “a child with chickenpox,” saying that “every dot you see is an Indigenous reservation.” He vowed no new protections for Indigenous land and is already laying the groundwork to eliminate protected areas. The weakening of FUNAI on his first day in power demonstrates the high priority he will place on attacking Indigenous territory.

The violent rhetoric, the appointment of agribusiness titans to the highest levels of government, the racism, and the disdain for environmental protection are sending a clear signal to his supporters—that violence, land grabbing and even killings of MST members and Indigenous communities will go unprosecuted. The results are already apparent: on December 8, two activists from the MST were assassinated in Paraiba. On December 17, Bolsonaro confirmed that he was considering revoking protections for the Raposa Serra do Sol Indigenous reserve in Roraima, one of the largest tracts of Indigenous land in the country.

Beyond the human impact, this presages a rapid increase in deforestation. Bolsonaro’s advisers said during the campaign that if elected, the government would complete the Belo Monte hydroelectric dam, a project decried around the world by NGOs, grassroots organizers, and public figures because it would displace Indigenous communities and wreak destruction on the Amazon. The dam displaced an estimated 20,000 to 40,000 people, which became operational in 2015 but is not yet entirely completed. Bolsonaro has also suggested building more dams in the Amazon, despite the Brazilian government announcing an end to the era of mega-dam construction a year ago.

Needless to say, these policies are a calamity for the fight against climate change. Not only is the Amazon biome one of the world’s most important carbon sinks, but the rate of deforestation has already pushed the Amazon to the brink. “The Amazon system is close to a tipping point,” Thomas Lovejoy, a professor who coauthored a report with  Carlos Nobre, chair of Brazil’s National Institute of Science and Technology (INCT) for Climate Change, told Agência FAPESP last year. The destruction to the Amazon is near the point at which the hydrological cycle faces profound disruptions, which could lead to diminished rainfall and lengthier dry seasons in parts of the Amazon. Such changes could make the damage to the world’s largest tropical rainforest irreversible, while also potentially accelerating forest loss.

Meanwhile, Bolsonaro is eager to sell off Brazil’s oil reserves and attract drilling and investment from international companies. There are many fewer hurdles standing in Bolsonaro’s way than in the past. After the 2016 impeachment of former President Dilma Rousseff, the corrupt government of Michel Temer forced an energy liberalization package through Congress, which opened up Brazil’s prized “pre-salt” offshore oil reserves to multinational companies. Bolsonaro will continue this policy, seeking to auction off as much oil as possible to ExxonMobil, Royal Dutch Shell, Chevron and other international oil companies. However, unlike the Amazon or violence against Indigenous communities, Bolsonaro’s oil policy will extend a practice undertaken by both Temer and Rousseff.

The only check on Bolsonaro’s power is his weak hand in the Brazilian Congress, which his fractured into numerous political parties—with most gains on the right-wing. But that is cold comfort given the array of threats emanating from this new fascist government.

More hopeful is the prospect of widespread resistance to Bolsonaro. Though left-wing parties have been disastrously defeated and Bolsonaro still has high poll numbers, other hopeful signs are emerging from its ashes. The #EleNão (Not Him) movement erupted in 2018, led by women and especially women of color. Hundreds of thousands of people staged mass protests on the eve of the first round of voting in late September, declaring their opposition to Bolsonaro. Protestors filled Brazil’s streets again after Bolsonaro won the presidency in late October. It is unclear how and if this movement can be sustained with Bolsonaro in power, but there is clearly vibrant energy standing in opposition to Bolsonaro, even if the institutional Left has been crushed.

Indigenous groups will also resist the onslaught. “Bolsonaro has made clear and consistent declarations about ending the titling of indigenous lands, which are completely opposed to our rights. His racist, homophobic, misogynist, fascist discourse shows how Brazilian politics will be in the coming years,” Dinamã Tuxá, Coordinator of Brazil's Association of Indigenous Peoples (APIB), told Amazon Watch. “We will resist his hate by protesting in the streets and by filing lawsuits, despite the fact that the courts have unfortunately not fulfilled their duty to uphold our constitutional rights. We will fight as we have for the last 518 years, waging resistance to guarantee our existence.”