Black women disproportionately experience the trauma of police aggression in Brazil. Understanding how requires complicating and expanding our definitions of state violence. 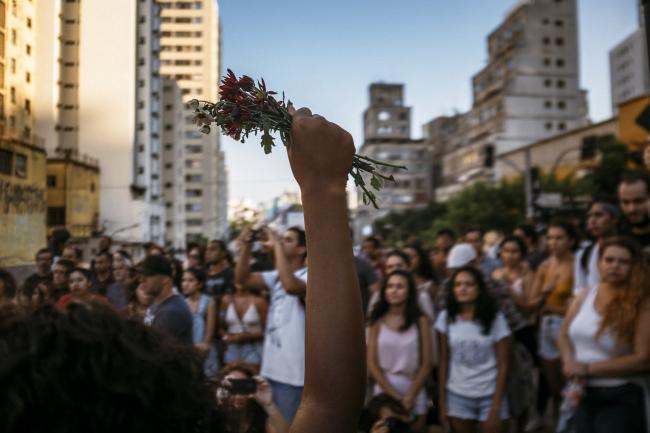 On March 16, 2014, military police shot and severely wounded 38-year-old Cláudia da Silva Ferreira in the suburban community of Madureira in Rio de Janeiro. She was leaving her house to buy groceries at a local market in her neighborhood when she got caught in the crossfire of a gun battle between police and alleged drug dealers. The police waited until the battle was over and put the unconscious Silva Ferreira in the hatchback trunk of the police car to take her to the hospital. They refused to let any of her family members ride with her. On the way to the hospital, she fell out of the trunk but stayed pinned to the car, held by a piece of her clothing. The police officers, who either didn't notice or didn't care, proceeded to drag her for approximately 250 meters until they reached a red light where they stuffed her limp body back inside the car. Silva Ferreira was pronounced dead on arrival at the Carlos Chagas State Hospital.

Almost four years to the day later, on the night of March 14, Rio de Janeiro councilwoman Marielle Franco was riding home with her driver, Anderson Pedro Gomes and her assistant, when an unidentified car pulled up beside her and shot repeatedly into her car. The assassin(s) shot her four times in the head, killing her, and also shot her driver, killing him as well. Her assistant escaped with injuries. Soon thereafter, it came out that the bullets that the killers used to kill Franco and Gomes were from a lot of ammunition that the Federal Police had purchased in Brasília in 2006, that an alleged death squad used to massacre 17 people in metropolitan São Paulo in 2015.

Police violence is a phenomenon that gravely affects Black men, but it also disproportionately targets Black women. Black women are also shot, tortured, and killed by the police in addition to facing sexual assault and terror due to both physical threats and the lingering, deadly effects of police terror. Following the work of Andreia Beatriz dos Santos, co-coordinator of the React or Die! Campaign Against the Genocide of Black People and co-founder of the Winnie Mandela School in Salvador, Bahia, I call this process sequelae, which draws from the medical definition of the term sequela, meaning “a condition that is the consequence of a previous disease,” as I have written in recent articles. I use the term to describe the lingering, deadly aftereffects of police terror on the bodies of the living in the aftermath of police killings.

Killed for Speaking Out

Franco's assassination sent shockwaves throughout Brazil and around the world. For many, she was the embodiment of the possibility of a new paradigm in Brazilian politics. She was a bisexual Black woman, mother, socialist, outspoken critic of racialized and classed repression, and councilwoman from the favela of Maré. She represented the seemingly outlandish possibility that a Black woman from Brazil's margins could leverage the political arena to enact real change. Her death was a devastating loss to Brazil's socialist movement, the Black Women's Movement, the Maré community, and people around the world who still hold out hope for a progressive future. It was also a painful reminder of the dangers of speaking out against police violence in Brazil.

In August 2018 more details about the connections between Franco and Gomes’ assassinations and the police surfaced. Police investigators in Rio began to suspect that a group of current and former military police officers and “militiamen” known as the Office of Crime killed Franco and Gomes. The Office of Crime is what many would classify as a “death squad”—an organization of assassins typically made up of current and former police officers that engage in systematic extrajudicial killings. Historically, these groups have had clear and evident ties to both the Military and Civil Police in Brazil, and can be traced back to the emergence of the secret police as far back as the early 20th century. Death squads are often the clandestine face of police lethality in Brazil. They are also very close kin to the milícias(militias) that occupy and terrorize the favelas of Rio de Janeiro: “organizations primarily made up of police officers, military firemen, and prison guards—active and retired—that guarantee the security of residents of some neighborhoods in exchange for a monthly fee,” according to an article by Alba Zaluar and Isabel Siqueira Conceição. The Office of Crime's headquarters are located near where Franco and Gomes were killed. 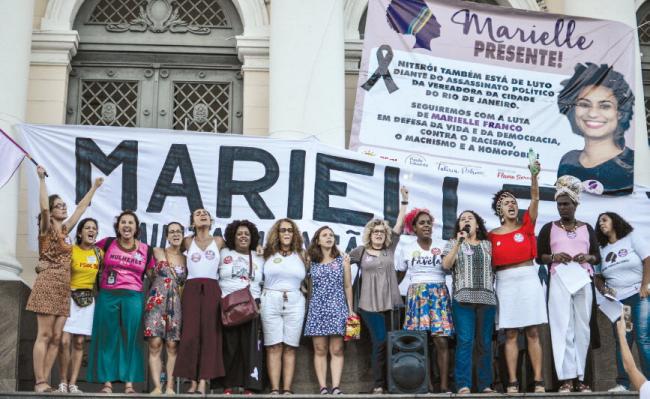 For years, Franco played an active role in denouncing militarized policing, militias, and clandestine activities orchestrated by the police and related forces like prison guards and militarized firemen. Firemen, like the police forces in Brazil, are militarized—one of the many legacies of the military dictatorship from 1964 to 1985. In 2014, Franco wrote her masters’ thesis at the Universidade Federal Fluminense on Unidades de Polícia Pacificadores (Pacifying Police Units, UPPs), militarized forces that occupy working class, majority-Black communities across Brazil, like Rio's favelas. In her thesis, Franco deconstructed the militarization of the police and the occupation and terrorization of the favelas of Rio:

The politics of the Department of Safety of the State of Rio de Janeiro maintain the characteristics of a Penal State … the central elements that define this reality are militarized police action, the repression of [favela] residents, the inexistence of rights and the displacement of residents from their communities to the peripheries of the city (which happens in many cases). That is, the continuity of a racist logic of the incarceration of Blacks and the poor, in addition to the discarding of a part of the population to the right of the city, continues to define public safety in the advent of UPPs. These elements are central to the relationship between the Criminal State and the police forces in Rio de Janeiro.

Franco did not shy away from critiquing the endemic problem of state violence against Black and poor residents of communities like Maré, and she recognized this violence as genocide against Black people in Brazil. She was clear about the role that militias, the militarization of the police forces, and police intervention play in terrorizing the favelas of Rio. The night before she was killed, Franco tweeted about the police killing of 23-year-old Matheus Melo de Castro in Rio, another young person who may have been killed by the Military Police (PM). He had been leaving church.

Marielle Franco posed a threat to the status quo in all that she embodied, and her outspokenness extended into the political arena. In 2008, Marielle served on the Parliamentary Inquiry Commission into Militias (CPI), which was charged with investigating paramilitary groups in Rio de Janeiro. The CPI found clear ties between militias and the police forces in Rio and involvement of politicians. Although the investigations into Franco and Gomes’ deaths have not concluded, the evidence thus far points directly to police participation, and implies that Marielle was targeted because of her outspoken and active denunciations of police violence. Unfortunately, this is not an unfamiliar story.

On May 21 2007, Military Police from Sussuarana invaded the home of Aurina Rodrigues Santana —a well-respected organizer for the city's Homeless Movement—and brutally tortured her son Paulo Rodrigo and 13-year-old daughter for three hours, ransacking their house, removing furniture, and leaving books and clothes strewn about everywhere. On May 27, Aurina and her children went to the Center for the Defense of Children and Adolescents (CEDECA /BA) to report the incident. There, they were appointed a lawyer to help them to file a formal complaint against the police officers they suspected were responsible for the aggression. On August 6, two of her children—whose names were withheld because they were minors and in hiding—testified at a public hearing regarding the torture they suffered and clearly identified the responsible police officers. Just eight days later, on August 14, plain-clothes police officers invaded Aurina's home in the neighborhood of Calabetão and executed Aurina, Paulo, and her partner, while two of her three younger children were in the other room.

Some of the boldest and most unabashed critics of police abuse are Black women whose personal lives have been touched by that abuse. This boldness puts them at risk for abuse, torture, and even murder or death. Both Marielle Franco and Aurina Rodrigues Santana were assassinated after direct, public, and formal denunciations of police abuse —Marielle participated in a legislative investigation of police corruption and Aurina pressed charges against the officers who tortured her children. Black women also die when they personally confront the police in their everyday lives. The story of Luana Barbosa is one such story.

The Murder of Luana

On the evening of Friday, April 8, 2016, in the municipality of Ribeirão Preto in northeastern São Paulo state, Military Police (PM) invaded the working-class region of Jardim Paiva 2 where they confronted 34-year-old Luana Barbosa dos Reis—a masculine-presenting lesbian woman—while she was riding her motorbike taking her 14-year-old son to his computer class. Officers approached Luana brusquely and ordered her to open her legs and stand with her hands behind her head against the wall to be frisked— standard protocol for stopping and frisking men in Brazil. When Luana protested, insisting that she was a woman and should not be required to follow this protocol, one of the officers hit her. Luana responded by punching one of the officers in the face. In return, they began beating her severely with batons. 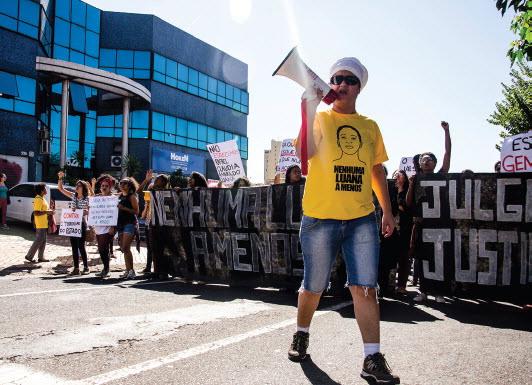 Later that evening, the officers took Luana to the police station for processing. When Roseli, Luana's sister, went to go pick her up from the police station, Luana was completely disfigured. Her right eye was almost out of its socket. She had vomited blood. She was only semi-conscious and her speech was slurred. She could not walk. The police would only let Luana leave on one condition: she had to sign a statement saying that she was responsible for the incident. Despite a clear lack of lucidity, she complied. On the sidewalk outside of the police station, Roseli took video footage of her sister's story in her own words in order to create an archive and counter-narrative to the police—a deliberate, political act of resistance.

Fearing police retaliation, the family hid Luana overnight. They then took her to the hospital the next morning. She was barely conscious, and her entire body was covered in large bruises. Five days later, Luana died in the hospital from multiple traumatic blows to the head that precipitated a stroke. Like Marielle and Aurina, Luana confronted police abuse directly, and was mortally targeted because of it. 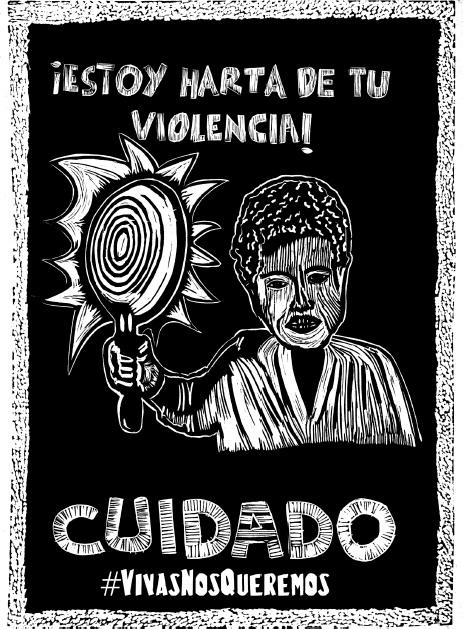 Christen Anne Smith, Ph.D., is Associate Professor of Anthropology and African and African Diaspora Studies at The University of Texas at Austin. Her work focuses on the gendered dimensions of anti-Black state violence and resistance in the Americas. Her book, Afro-Paradise: Blackness, Violence and Performance in Brazil (University of Illinois Press, 2016) chronicles Black Brazilians’ experiences with police violence in Bahia and the relationship between this violence and the state's construction of Bahia as an exotic tourist site.