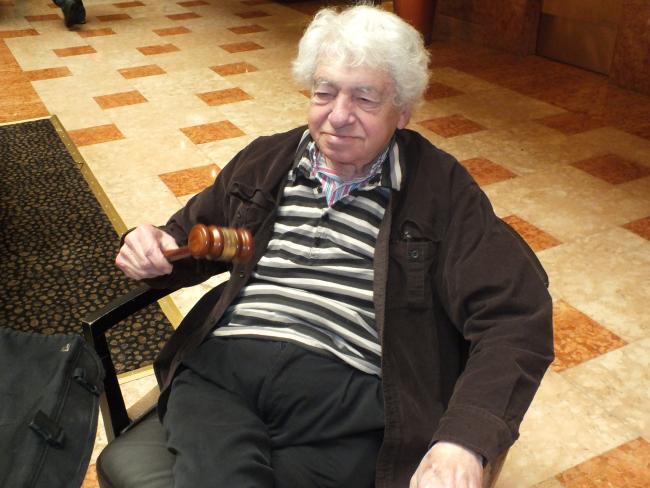 I first met Larry Birns in April 2000 at the COHA offices in Washington, DC. It was my first time in the nation’s capital and the first day of my four-month internship for COHA. Needless to say, I was nervous. But as soon as I arrived, I realized there was no time for nerves as this would not be an internship where I would spend most of my time doing menial tasks with limited responsibility. Larry put me right to work and within a few weeks I was managing an office of more than 20 other interns while churning out articles, press releases and op-eds at a breakneck pace.

COHA’s structure was unique. There was no full-time staff; it was just Larry and the interns. Larry was willing to give us as much responsibility as we were willing to take on. We were treated as if we were experienced professionals, not unpaid interns. I was interviewed about Peru’s repressive regime on Pacifica radio and at Larry’s insistence I wrote a letter to the editor that appeared in the Wall Street Journal, which was the first time my words had been published. These experiences were thrilling for me and instilled in me the confidence and skills that would help me take my subsequent career steps.

I remember our office meetings, in which the interns would pack one of COHA’s cluttered office rooms, some of us sitting on the floor, as Larry would hold court, regaling us with his wit, his playful humor, and his boundless vocabulary. I had gone to a top-notch university but every time I heard him speak I would learn words that I hadn’t heard before. Larry was a master of the English language and I always loved hearing him speak, whether it was to his interns or on national television debating nefarious characters like Oliver North.

Larry was a ruthless editor and a press release or article might go through a dozen or more drafts before he would finally approve it. He had high expectations but was ultimately always supportive and encouraging. He pushed us as far as we were willing and able to go, demanding only so much as we were capable of giving. I happened to arrive in the Spring, before the influx of summer interns, and as a result Larry bestowed upon me the title of Office Manager. I wanted to take a week or two to organize the office and its stacks of folders with newspaper clippings, articles and old copies of the Washington Report on the Hemisphere. But for Larry there was no time for such low priority tasks. Larry pushed us to stay on top of every breaking event occurring in Latin America, often with dubious U.S. government involvement, and it was incumbent upon us to expose the truth.

What drove Larry to dedicate more than 40 years to COHA, to work weekends and early mornings and late nights, to train countless interns, starting from scratch every time the newest arrivals walked through the organization’s doors? I never asked him this question but I feel I know the answer. Larry believed that COHA could make a difference in the world, that it could change U.S. policy for the better, that it could even save lives, and thus we had the duty to fight doggedly to shine light on stories that the media were either not covering or just plain getting wrong. I remember feeling this urgency, even if it was unspoken, and pushing myself to meet deadlines and to cover as many stories as I could, knowing that if COHA didn’t write about it, nobody else would.

My internship at COHA was transformative for me. After spending four months trying to convince journalists to do their job the right way I figured I should become one myself. With Larry’s encouragement, I moved to Latin America and have since spent most of my adult life working from there as a journalist and as a documentary filmmaker. I’m not sure if any of this would have happened if it were not for my experience at COHA. I visited Larry last July. He seemed frail and COHA felt quieter and less chaotic than it had been when I was there. But the sparkle in Larry’s eyes was as bright as ever. And the latest, and sadly the last, group of interns seemed as eager to make a difference as I had remembered. When I was far away in other countries and immersed in other issues, I would take for granted that COHA, and Larry, would always be in the belly of the beast, calling out legislators and journalists, presidents and pundits. Larry was a fighter and he never stopped fighting, dedicating his life to fighting for the truth and for social justice.

In the days after Larry’s death, I was disappointed to see the lack of coverage by the media organizations to whom he had contributed so much over the years, providing quotes and interviews and research for which they lacked either the time or the initiative to discover by themselves. Somehow, though, I don’t think Larry would be disappointed. Although he appeared regularly in the media, it was never about him. His ego always took a back seat to the truth—and to his interns. I remember one time, only a month or two into my internship, Larry insisted I appear on live television in his place to debate a conservative pundit. I was shocked that he would entrust me, with so little experience, to speak in the name of COHA. I was also terrified. Thankfully the appearance was canceled at the last second.

Over the years, COHA helped influence public opinion and at times policy. But ultimately, I believe, the greatest difference that Larry made was in transforming the lives of interns like myself. More than 1,000 young people must have passed through the hallowed halls of COHA. And for many of us, the experience was profound. We learned to think and to write, but more importantly, we were inspired to fight for a better world. Larry was the consummate mentor, a role for which one almost never gets paid and rarely gets credit. But even if Larry’s impact cannot be quantified or measured, even if it is ignored by the media, it is no less real. My life was changed for the better thanks to Larry and I shall remain forever grateful.

Reed Lindsay is a freelance journalist and filmmaker. He interned at the COHA in 2010.