Jair Bolsonaro’s first month in office has been even worse than imagined, as the administration moves to loosen gun laws and pass a hardline penal reform amid corruption allegations against incoming senator Flávio Bolsonaro. 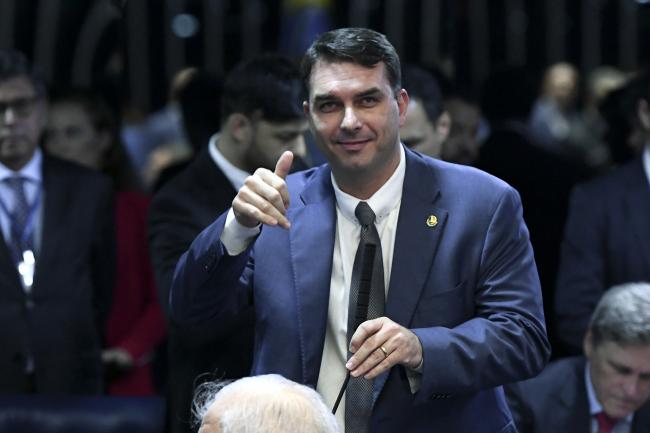 In his first month in office, Jair Bolsonaro’s administration in Brazil has managed to construct a government that will make good on many of its militaristic, anti-environmental, homophobic, and misogynistic promises, diffusing any doubt that his campaign rhetoric was merely hot air to rile up his base. A slew of executive decrees and legislative projects have demonstrated that Brazil’s new government intends to deliver on its platform of militarizing the police, easing access to firearms, undermining environmental regulation, dispossessing Indigenous lands, and inaugurating a new era of domestic and foreign affairs in Latin America that seeks to banish the Left from its ranks. With pro-government leadership stacking both the House and Senate, Bolsonaro’s legislative path, too, is clearer than many would have imagined.

To be sure, the government is tarnished by scandals that may ultimately undermine its ability to govern in the long term. The Brumadinho dam collapse, the growing revelations of the Bolsonaro family’s connections to militias in Rio de Janeiro, and the corruption allegations that grow ever-nearer to the self-identified anti-corruption president will pose considerable public relations, if not legal challenges, for the government. It is, however, just the beginning of the new government, which has thus far seemed able to form more alliances than initially seemed likely. The speed at which his administration will enact orthodox neoliberal economic reforms under Economic Minister Paulo Guedes, including pension reform and privatizations, remains to be seen. As for the rest, a month in, the situation in Brazil is as bad as its darkest promises, if not worse.

One of Bolsonaro’s first measures as president was to loosen restrictions on gun ownership. In an executive decree, an effective form of legislation as alliances took shape in Congress, the president single-handedly made purchasing arms possible for millions more Brazilians when it had previously required police authorization demonstrating professional need or risk. Now, nearly all adult Brazilians without a criminal background will be allowed to own weapons. With the “Bancada-de-Bala” (“Bullet Caucus”) working closely with Minister of Justice Sérgio Moro, it seems likely that further legislation to make owning and carrying weapons will follow.

Moro, of course, has aligned himself with the forces of “the rule of law” after having prosecuted and convicted former president Luiz Inácio Lula da Silva for corrupt acts with limited evidence, making him unable to run for president in 2018. Operation Lava Jato, which Moro oversaw, targeted members of the left-wing Workers’ Party (PT) and left numerous politicians from the center and right-wing PMDB and PSDB unscathed, under the seemingly non-partisan justification of anti-corruption. But as Minister of Justice, Moro has focused less on anti-corruption and more on new measures that strengthen criminal law. The metaphorical “bleeding” of corruption that PMDB Senator Romero Jucá infamously sought to stop during the height of the Lava Jato has now been brought to a trickle.

This week, Moro presented a comprehensive proposal for reforming Brazil’s criminal and penal codes. The proposed changes include substantive reduction of punishment, or even its non-application, to police officers who commit manslaughter while on duty. It will enshrine in law a widened notion of legitimate defense in a country with one of the highest rates of police killings. In the state of Rio de Janeiro, some 1,444 people were killed by police in the first three quarters of 2018 alone.

As for those convicted, the proposed criminal reforms would make sentencing more severe and with fewer possibilities for commutation. With Brazil’s prison system already in a state of emergency, characterized by massive human rights violations and increasing mutinies, any increase in the prison population is bound to exacerbate the situation. All evidence suggests, too, that the ongoing privatization of the Brazilian prison system, already underway in São Paulo under João Doria’s governership, will soon occur at a national scale. The privatization of prison systems in countries such as the United States have led to decreased oversight and increased repression and abuses of prisoners, and is likely to carry similar results if enacted in Brazil.

Moro’s anti-crime proposals come at the very moment that Flávio Bolsonaro, Jair Bolsonaro’s son and a Senator-elect, has been shown to have indirect connections with Rio de Janeiro’s infamous death squad, the Escritório do Crime (The Crime Bureau). According to a recent report in one of Brazil’s major news outlets, Flávio employed the mother and wife of former police captain Adriano Magalhães da Nóbrega—the strongman behind the Crime Bureau, and one of the suspects in the murder of socialist city councilwoman Marielle Franco last March. Mrs. And Ms. da Nóbrega were on the payroll for ten years in Flávio Bolsonaro’s office in Rio, where he was a state representative, until November 2018.

Flávio Bolsonaro has repeatedly praised Nóbrega for his “brilliance and gallantry” and for his “service to society performed with absolute swiftness and exceptional behavior,” despite—or perhaps because of—his long history of criminal involvement, including homicides. Though Flávio Bolsonaro claims no responsibility for Nóbrega’s actions, his proximity to the former police captain raises alarm not only about possible dealings with organized crime but also with political crime, as Sérgio Ramalho has written in The Intercept.

As is now notorious, during his campaign Bolsonaro pledged to purge left-wing “outlaws” and has claimed that the military dictatorship’s only mistake was not killing more people. Furthermore, his supporters have intimated, attacked, and even killed those who have expressed opposition to the new government’s agenda. In fact, the long-known but now-proven proximity of the Bolsonaros to militias in Rio prompted socialist LGBT congressman Jean Wyllys to flee Brazil after receiving death threats.

Beyond using intimidation to take down opposition, the Bolsonaro government is attempting to silence accusations surrounding Flávio’s financial dealings. The investigations against Flávio, temporarily suspended by Brazil’s Supreme Court, have been reopened. But the organ responsible for reporting unusual payments, the Council for Financial Activities Control, now falls under Moro’s control, so it is doubtful that future transactions will be made public. For the 58 million Brazilians who voted for Jair Bolsonaro, however, these scandals are most often seen as an attempt to unjustly derail the president.

The Bolsonaro government has also taken measures to enable greater surveillance and control of NGOs and civil society. At the same time, it has also sought to minimize transparency for its own actions. A provisional measure carrying the force of law—medida provisória 870— has granted low-ranking bureaucrats the authority to declare documents as top secret, removing them from citizens' view and therefore violating laws guaranteeing access to public information. This is worrying, of course, both in terms of holding the Bolsonaros and Brazil’s cabinet accountable for individual acts of corruption, but also for holding the government accountable for broader public problems.

Meanwhile, the ongoing tragedy in Brumadinho, Minas Gerais, the second major dam to collapse in Brazil since 2015, shows no signs of changing Bolsonaro’s language of environmental deregulation, even as the death toll now stands at 134 with close to 200 missing. Brumadinho, like other public infrastructure, was privatized during the 1990s under president Fernando Henrique Cardoso. Beyond constituting a natural disaster, it is a case in point for how privatizations have contributed to the ineffective and irresponsible management of public resources with profit superseding all other considerations. Without a broader reckoning, companies such as Vale, which operates the Brumadinho dam, will continue to extract rapaciously and with impunity, preferring to pay fines for damage caused to the environment and society rather than change their practices, as the government abets their actions.

In any case, the much weakened Environmental Ministry, many of whose competencies have been transferred to the Ministry of Agriculture, will serve industry more than regulate it. In this sense, climate change denier Ricardo de Aquino Salles promises to do very little. Even if Brazil has not yet officially withdrawn from the Paris Climate Agreement, it is sure to disregard many of its measures in practice.

Though Bolsonaro’s response to Brumadinho was negligent and ineffective, he used the tragedy as an opportunity to bring his administration closer to Israel. Israeli prime minister Benjamin Netanyahu sent 136 soldiers to help with search and rescue operations. Justified by the alleged superiority of Israeli search technology, the mission was for most impartial observers a public relations affair meant to encourage Brazil to move its embassy, like the U.S. already did, to Jerusalem. It remains to be seen, however, whether Bolsonaro’s promise to Netanyahu will be able to overcome the potential loss of trade with the Muslim world.

Both domestically and internationally, the first month of Bolsonaro’s presidency has consolidated Brazil’s shift from a counterweight to Washington in the Western hemisphere to its most significant ally in reshaping Latin America. Predecessor Michel Temer, of course, had already begun the process of dismantling Brazil’s labor protections and independentist foreign policy under Lula and Dilma Rousseff. Brazil’s chancellor (the equivalent of secretary of state) is forthright in his support of Venezuela’s self-proclaimed president Juan Guaidó, even though he denied that Brazil would either troops or allow American troops to be deployed to Venezuela through Brazil. The Brazilian right has long supported toppling Maduro— even prior to the May 2018 elections— and Bolsonaro’s government has made it clear that it will work with the U.S. in using humanitarian aid and economic policy to effect regime change.

The particularity of Bolsonaro’s nationalism, as Perry Anderson has analyzed, is that he is no enemy to foreign capital. And with an increasingly likely coalition in the Brazilian House and Senate, pension reform now looks “inevitable,” according to House president Rodrigo Maia. Indeed, with an emerging privatization plan that includes airports, highways, energy resources, and the aforementioned prisons, Brazil’s public infrastructure threatens to become a skeleton of itself in no time at all.

Not all of Bolsonaro’s reforms will come easy, but his team is better organized and the government’s alliances stronger than initially expected. With the Democratas (successors of the military dictatorship’s party ARENA) leading both chambers of Congress, and a powerful right-wing social media overpowering more traditional liberal outlets, support for Bolsonaro seems only to have consolidated since he took office. Furthermore, the political establishment seems to have no qualms about supporting him as long as its interests are served. Shock treatment, smokescreens, and fake news will steamroll through the growing scandals until Brazil is remade.

Mariella Pittari is a public defender in the state of Ceara, Brazil. She holds an LLM from Cornell University.