New legislation in Brazil threatens to broaden the definition of self-defense, which could allow police officers to avoid legal consequences for abuses committed on duty. 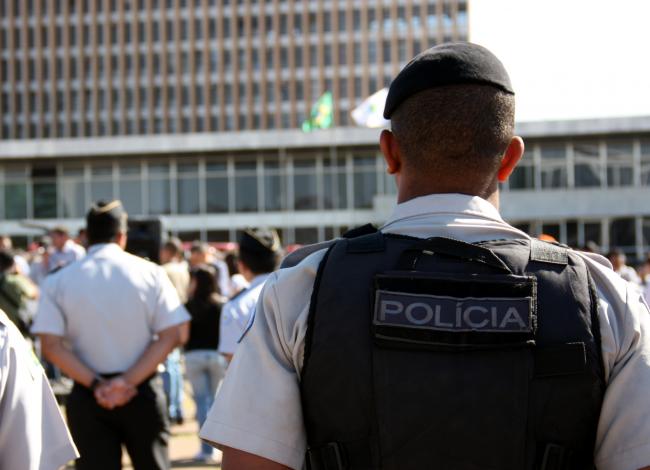 Judges in Brazil could now be allowed to dismiss homicide cases if the perpetrators claim they acted in self-defense, if legislation introduced by Minister of Justice and Public Security Sérgio Moro on February 19 passes. The legislation is part of a package of crime bills presented to Congress on the tails of a February 15 episode in which a private security officer killed a 19-year old black man, Pedro Henrique de Oliveira Gonzaga, inside a supermarket in Rio de Janeiro. The incident reignited debates about Brazil’s high rate of police violence and extrajudicial killings by law enforcement officials. The guard, Davi Ricardo Moreira, who is currently on trial, claimed he was acting ipn self-defense because the young man was trying to steal his gun.

Though under current laws, the guard’s actions could be considered excessive and he could face charges, if Moro’s new laws are passed, a judge could simply choose to dismiss the case against the guard due to his argument of self-defense.

The concept of self-defense was defined under Brazilian law in 1940 by the 2848 decree, described as responding to aggression in a moderate and proportional way. Anyone who commits a crime while protecting themselves or others from aggression may be exempt from the judicial process, so long as no excesses are committed. The law states that all self-defense actions must be proportional and use moderate means, and that all excesses are punishable.

Moro’s legislation on crime and corruption proposes an alteration to the legal definition of legitimate self-defense. It includes a paragraph stating that judges may reduce or annul a sentence if excesses are committed, so long as they are provoked by “excusable fear, surprise or violent emotions.” It also states that “self-defense” can be preventative, used by public security officers in a context of armed conflict or its imminent risk, or when public security officers prevent actual or potential aggressions against hostages.

These proposed changes have sparked immediate concern among human rights advocates, who worry the bill could be an implicit license for police officers to kill. Their biggest concern relates to the language around “violent emotions” and “fear”—both subjective terms that could be alleged in many situations. In this sense, police officers who end up killing civilians will gain larger legal frameworks to avoid prosecution.

The legislation is part of far-right-wing president Jair Bolsonaro’s platform, which asserts that law enforcement agents should not be condemned for their actions and should have more freedom to conduct their operations. He has also criticized concerns over the human rights of those accused of crimes, which he and his supporters see as a left-wing cause to protect criminals.

Moro, for his part, argues that his proposal does conform to the rule of law with respect to fundamental rights. According to the legislation’s sponsors, the bill intends to give more protection to police officers, since the number of police officers murdered is also relatively high: 367 officers were violently killed in 2018. This issue has gained visibility in the last few years, as police officers have also demanded more protection.

The debate around police reform and public safety in Brazil in recent years has mainly focused on its failed public security policy in Rio de Janeiro, setting the stage for Moro’s actions. The model combined the creation of the specially-trained Pacifying Police Units (UPPs) with operations by elite and heavy armed police units and armed forces, chiefly in the Complexo do Alemão (2007) and Maré (2014) favelas. The idea was to first expel drug traffickers from these areas via massive police and military interventions, which would make a second phase possible: the establishment of units specially trained in human rights and community policing.

The initial involvement of the military and heavily-armed police officers in neighborhoods with high crime rates led to an increase in state violence against local inhabitants, because it followed a militarized approach and army officers were not appropriately trained to serve as police. The militarized approach also lacked social policies to target the favelas’ development.

In February 2018, amid an economic, political, and fiscal crisis in the state of Rio de Janeiro, the government of Michel Temer initiated a federal intervention that put an appointed military officer in charge of managing the state’s security policy. More than 70 percent of Rio de Janeiro city inhabitants approved of the decision, but only a narrow majority thought it would improve safety. Bolsonaro’s election signals that a militarized approach to policing is not unpopular among vast segments of Brazilian society. Moro’s proposals signify the administration’s approval and likely continuation of such an approach.

We must understand Moro’s proposals in the context of a country with one of the highest rates of killings by police officers in the world, a number that has been growing in recent years. According to the Rio-based Institute of Public Security, killings at the hands of the police increased from 236 reported in 2013 to 1,574 reported in 2018 in Rio de Janeiro state alone. In Brazil as a whole, more than 5,000 people were killed by police officers in 2018, or 14 people per day.

A 2017 Amnesty International report affirms that “extrajudicial executions, carried out by both civil and military police […] are rarely investigated and most go unpunished.” Indeed, impunity for cases of excessive police violence is a significant problem in Brazil. Also in 2017, the Inter-American Commission on Human Rights (IACHR) condemned two cases of police violence in Brazil, which had taken place in 1994 and 1995 resulting in the deaths of 26 youth and sexual abuse of three girls by law enforcement agents. In each case, there was no investigation or prosecution by the Brazilian courts, since the deaths happened in the context of conflict. The IACHR also highlighted the fact that police violence is a human rights issue in Brazil that affects black and poor communities in particular. Moro’s proposal to broaden the scope of self-defense will make it easier for law enforcement agents to claim self-defense and remain exempt from conviction.

Plus, the wording of Moro’s bill also raises concerns related to violence against women. As Antonia Pellegrino and Manoela Miklos have pointed out, “violent emotion” could exempt domestic violence and abuse as “crimes of passion.” In the past, it was not uncommon for men to argue self-defense in order to be acquitted for crimes against their spouses. This changed in 1979, after the failure to convict a man who had killed his ex-girlfriend led to protests. Moro’s bill could mean that the idea of violent emotion could once again be used in domestic dispute cases, allowing people who abuse their partners to make an “excusable” claim of fear or surprise.

Other measures enacted under the Bolsonaro government will also increase opportunities for domestic abuse. On January 15, the Brazilian government reduced requirements for the purchase of firearms, a concerning development for a country with 606 daily reported cases of domestic violence. Easier access to guns may make these cases more dangerous and lead to an increase in the number of femicides.

With a homicide rate among the highest in the world, Brazil needs policies to promote public safety and human rights, not increase impunity for violent and abusive state actors. Black communities, poor residents, and women are the most vulnerable in the face of this violence.

Fortunately, the law has not gone to a vote and there is still time to rethink and adjust policies. In fact, human rights advocate and congressmen Marcelo Freixo was chosen as one of the reviewers of the anti-crime project. Freixo has already drawn attention to the plan’s shortcomings and has promised to invite human rights advocates and experts to discuss the proposal. Whether the Bolsonaro administration and the right and center-right Congressmen will listen is another story entirely.

Livia Peres Milani is a Visiting Researcher at CLAS – Georgetown University, and a Ph.D. candidate in International Relations at University of Campinas, funded by São Paulo Research Foundation (FAPESP). She is also an intern at the Wilson Center Brazil Institute.