In Colombia’s southern province of Putumayo, a group of women is stitching together social fabric despite an alarming number of ongoing threats and acts of violence against them. 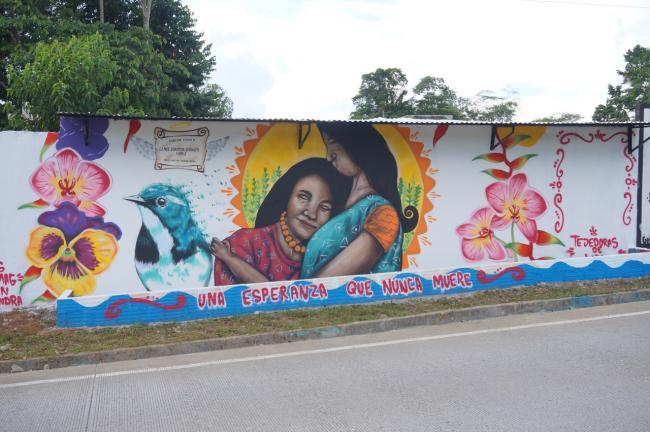 This article is also available in Spanish. To read, click here.

Fifteen days before her wedding in 1990, Sandra* was kidnapped and raped at gunpoint by armed men. She survived the attack, and today works with the Alianza de Mujeres Tejedoras de Vida (Alliance of Women Weavers for Life), a coalition of grassroots women’s associations across the 13 municipalities of the department of Putumayo, Colombia.

Based in the municipality of San Miguel on the border with Ecuador, Sandra in one of many victims of Colombia’s armed conflict. In 2014 a friend took her to an Alianza meeting, where she “began listening to other stories of women’s resistance in this violent territory.”

Women leaders founded the Alianza in 2005 amid staggering levels of violence in the hopes of uniting “feminine force” to rebuild the social fabric of communities after years of terror. It today serves as an example of resistance in the face of the current reconfiguration of Colombia’s armed conflict by empowering women to denounce crimes, providing them with economic opportunities, and teaching them how to become peacebuilders in their communities.

Sandra participated in the peacebuilding program through Alianza and is now a Peace Mediator, where she works to promote the Alianza in both urban and rural spaces. Her involvement has made her a target. After receiving threats from both FARC dissidents and local paramilitaries, she now travels with a state-provided armed bodyguard. “In May they came to my house… and pushed their way in… They told me I had to join them or they were going to kill me and my daughters.” Later, a paramilitary group followed and threatened her because of her community leadership, she said.

“The paramilitaries came, a woman and two men, all armed… They asked me for information. They said, if you don’t help us, we know where your daughters work.” When Sandra refused, they turned up at the casino where her daughter worked. Her daughter hid inside, protected by her colleagues, until Sandra and her friend could smuggle her out under cover of darkness.

Sandra is not the only woman who has experienced violence since the passage of Colombia’s historic peace accords, signed in 2016, which officially ended the country’s five decades of conflict between the Revolutionary Armed Forces of Colombia (FARC) and the government. On May 2, 2018, Deyanira Guerrero, treasurer of the local Alianza affiliate association, disappeared from El Place, and has not been seen or heard of since. Her name had previously appeared in a threatening pamphlet sent out by a paramilitary group.

The situation has worsened considerably. In February, the Alianza denounced the “alarming wave of episodes of violence against women and feminicides in the region.” They have identified thirteen cases of feminicide and ten forced disappearances that have taken place so far in 2019, which they attribute to attempts to “intimidate and silence those who seek to advance the rights of women in the region.” A newspaper report from March 2019 documents seven cases of feminicides in just one weekend, including that of Sonia Yanabeth Rosero who had aspirations to run for mayor in Puerto Asís.

Women are being targeted, Sandra says, because “we have fuerza and that is the biggest threat we pose... They don’t want leaders; they want complete social control.”

A History of Violence in Putumayo

Bajo Putumayo is an Amazonian savannah in southern Colombia, bordering Ecuador and Peru. Since the late 1970s, the region has been a hub for coca production, with a variety of armed actors vying for control over this lucrative illicit economy. By 1991, the 48th Front of the FARC had gained territorial hegemony. In 1999, however, the Bloque Sur Putumayo (Southern Putumayo Block) of the United Self-Defense Forces of Colombia (AUC) paramilitary began to fight the FARC for control.

As a Centro de Memoria Histórica (Historical Memory Center, CMH) report notes, from 1999 until the AUC demobilization in 2006, “terror, threats, anxiety, fear, confinement, armed combats, stigma, torture, sexual violence, and imposed social order” marked this part of the country. Towns like El Tigre and El Placer witnessed public massacres. Women were specifically targeted during this period of paramilitary rule. Their bodies “became objects of desire and control for the paramilitaries,” according to the same report. Colombia’s Victims’ Unit documented almost 237,000 cases of displacement, 29,000 murders, and 1,500 cases of sexual violence in the department between 1985 and 2019.

Many paramilitaries also accused women of being guerrilla supporters simply for living in FARC territory. The CMH report documents the story of a woman accused of previously having sexual relations with FARC members. In retribution, she said, the AUC publicly and brutally gang-raped her, killing the fetus she was carrying, breaking her hip, and leaving her permanently disfigured. In this way, women’s bodies “became vehicles for [sending] terrorizing messages to the population,” the report concludes. Such practices were common. Women were also tortured and killed in front of their neighbors and loved ones, the report asserts. 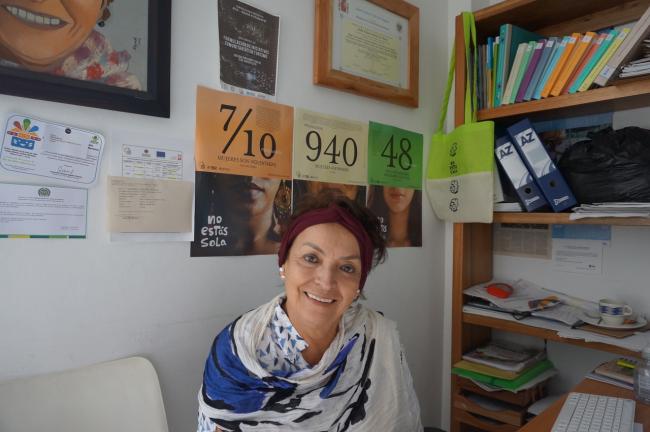 Weaving Social Fabric in the Aftermath of Horror

During the conflict between the AUC and the FARC, Doña Fátima Muriel was an educational supervisor. As she traveled throughout the department, it became clear to her “that this was a war.” She talked to families, teachers, and children, and she realized “the social fabric was damaged; if a woman is killed, the entire home is killed.”

The need to build a protection network specifically for women led Muriel and a group of female leaders to begin to organize meetings with various community women’s associations to unite under one set of goals. Today, the Alianza is the strongest women’s organization in the department. It brings together 115 constituent women’s associations “to empower women and their organizations… with the goal of recovering the social fabric that was affected by the armed conflict and social violence, and to build a Putumayo with gender equality and peace,” according to their website. They hope to achieve this goal through three main programs: (1) women, human rights, and peacebuilding, (2) women and political participation, and (3) women and social and economic development.

Members of the Alianza were present in the peace talks in Havana, where they spoke before the gender subcommittee and offered their advice on how the peace process could take a gendered approach to respond to the needs and challenges facing women. During this experience, they decided to train 65 women as “Mediators of Peace” in a diploma program. Originally funded by Fundación Colombia Transforma (Foundation Transform Colombia), they now operate across the department, replicating what they learned and teaching it to other women who survived the armed conflict, thus transforming territories of violence into spaces of peace. “What we want is reconciliation. The women here are very scarred, they carry pain,” Muriel explains. “Without the truth they are never going to be able to forgive.”

Their work faced a challenging moment in 2016, when a group of FARC rebels came out of the jungle to the Carmelita demobilization camp near Puerto Asís in 2016 in the wake of Colombia’s peace accords, part of reintegration agreement. Many other community members were hesitant to work with the demobilized rebels, who they mistrusted after living through years of armed conflict. But the members of the Alianza decided that in the spirit of building peace, they needed to make a gesture of goodwill towards them. “We were the only ones who went to receive [the FARC] with our hearts open,” Muriel says. “When we got to work with them, they asked us for our forgiveness, and we forgave them.”

In 2018, the Alianza began the No Estás Sola (You are Not Alone) campaign. Part of this campaign involves providing legal and psychological assistance for victims of gender-based violence, as well as monitoring and documenting cases. In nine months, 53 cases were registered, 53 percent involving sexual violence. This number is likely even higher than the records reflect. “There are many women who still don’t want to talk about this. They’re afraid,” a survivor who wished to remain anonymous tells me.

Alianza also pays homage to its compañeras who have been killed, through large-scale initiatives such as creating truth murals in the biggest town in each municipality. These paintings differ in size and content, but center on memorializing those who were killed or disappeared in the context of the armed conflict. The most elaborate mural is located at the Puerto Asís Airport, where the women created a mural of three Indigenous women’s faces out of thousands of recycled bottle tops. In Villagarzón, a mural features the face of a woman whose hair is made of a tree and leaves; below her are a series of plaques with the names of deceased women from the region. The inscription reads: arrancaron nuestros frutos, cortaron nuestras ramas, quemaron nuestro tronco, pero no pudieron matar nuestras raíces… (they pulled off our fruits, they cut our branches, they burned our trunks, but they could not kill our roots…). 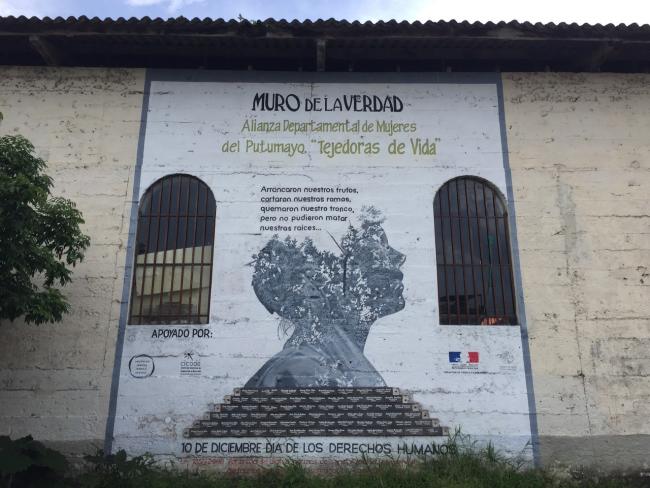 Colombia’s southern border doesn’t receive the same international attention as does its border with Venezuela. Despite this, it is not a border region that authorities and policymakers can afford to forget. According to the UNODC, Putumayo was one of the highest coca producing regions of 2017 (24 percent of the national total). This figure jumped another 20 percent between 2017 and 2018. Given a lack of economic opportunities, many women work in the coca industry, exposing them to multiple dangers at the hands of armed groups.

Despite ongoing peacebuilding efforts, the security situation in Bajo Putumayo is changing, because throughout Colombia, the demobilization of the FARC left behind power vacuums in areas where the rebels previously dominated. New guerrilla and violent armed groups are once again seeking territorial control to gain dominance over coca production and other illegal economies.

For example, in January 2019, a pamphlet signed by the Bloque Sur Putumayo AUC (Putumayo Southern Bloc, AUC) contingent of what was formerly the most powerful paramilitary group in Colombia, was distributed locally, warning of social cleansing against Indigenous organizations, social leaders, and journalists.

Despite this, the Alianza continues to fight for gender justice. They have actively called on the government to protect women’s rights in the context of “an epidemic of machista violence.”

The women try to keep a lower profile by not wearing identifying clothing or spending time in public spaces. They take care of each other. As Sandra notes: “We are sisters now. When something happens to one of us, it happens to everyone.”

*Her name has been changed for security reasons.

Dr. Julia Zulver is a post-doctoral researcher at the University of Oxford whose research investigates women’s mobilization in high-risk contexts. Her current projects focus on gender violence in Colombia’s borderlands. Twitter: @JZulver