In the hills of Lima, a concrete wall divides a poor neighborhood from a wealthy gated community, marking a border defined by centuries of structural neglect. 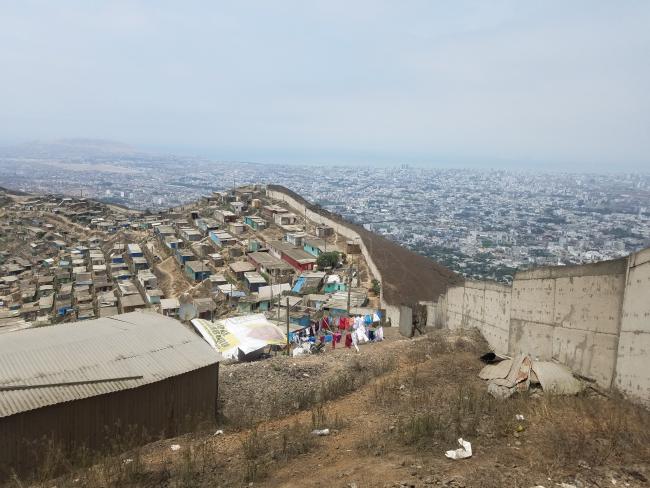 After turning off the main avenue in San Juan de Miraflores, Lima, the combi bus wound its way up a partially-paved hill, leaving minidust storms in front of the tightly-packed unfinished brick homes. Such constructions were typical of the lower portions of Lima’s outer hills, neighborhoods that migrant squatters have settled since the 1950s. Many of the homes were originally constructed by their owners out of cheaper materials like straw and plywood, and had been improved over time, a result of family and community efforts. After about ten minutes, the fare collector opened the sliding door, indicating that we had reached the end of our route. But I still needed to get further up, to the hill’s most recent residential expansion.

I quickly boarded another combi, which for an additional fare took me up a dirt road for five minutes, and then stopped where the road did. The desert landscape was bleak and lacked vegetation, but some murals and brightly-colored homes cut the grey and brown. A cement basketball court a few meters away from where the bus dropped me was the only wide expanse in the neighborhood. It sat below eight steep levels of one-to two-room plywood, tin-roofed homes that formed a semi-circle. As if I were on the stage of a huge amphitheater, I could see everything and everyone around and above me, and everyone around and above me could also see me. Nearby, two children playfully maneuvered their bodies to both squeeze onto a single tricycle, and a teenage boy kept a watchful eye on them while smoking on the concrete bleachers that lined one of the short sides of the court. But most of the neighborhood activity on this Sunday morning in November 2018 took place above me, near the homes. Men gathered water from the communal tanks while women washed clothes.

I made my way to the court, where I was to meet a community organizer in his early thirties whom I will refer to as Carlos. As I looked upwards, a man standing outside his house on the third terraced level yelled “Carlos,” pointing to another man walking up towards the court. Carlos greeted me with a smile. A gregarious and contemplative guy, he was on his day off from the factory he had worked at for 12 years. Carlos’s neighborhood, Agrupamiento Familiar Nadine Heredia (Nadine Heredia Family Grouping, AFNH), located in the municipality of San Juan de Miraflores, or San Juan, consists of 250 households headed primarily by second-generation migrants who grew up nearby and have started their own families. In a process resembling the development of most poor neighborhoods on Lima’s outer edges, AFNH was settled through squatting and eventually formalized in 2012. It was named after the first lady at the beginning of Ollanta Humala’s presidency (2011-2016), when there was still a certain hope that the new administration was committed to structural changes that would improve the conditions of Peru’s economically marginalized citizens. Unfortunately, Humala’s progressive nationalist platform fell short on its promises, upholding neoliberal policies that favored big business and placated the political right while further alienating Peru’s poor.

Carlos explained the lay of the land. He pointed out the community center and basketball court, which residents— with the f inancial help of an NG O —had constructed themselves. “That was made with the leftover cement from the wall,” he noted of the bleachers where the teenager had been sitting. The wall he referred to was the three-meter high concrete structure topped with barbed wire along the hill’s ridge. In recent years, it has come to be known as Lima’s Muro de la Vergüenza, or Wall of Shame.

On the other side of the hill sits Casuarinas, part of the municipality of Santiago de Surco, or Surco, and one of Lima’s most exclusive gated communities. Shortly after the settling of AFNH, Casuarinas residents commissioned the wall. For decades, residents of Casuarinas had interacted with residents of San Juan only insofar as they employed them as maids, nannies, security guards, and gardeners, who were required to enter through the neighborhood’s front gate at the base of the hill in Surco. With the top part of the San Juan side of the hill now occupied, Casuarinas residents panicked about the risk of overflow into what they had until then experienced as a secure community, socially and physically insulated from the realities of the majority. AFNH residents only found out about the plans for the wall when cement trucks showed up offering to hire them to help build it.

In a city where even middle-class neighborhoods often have some sort of gate, Casuarinas is known for its particularly elaborate security apparatus. Three distinct checkpoints—one for residents, one for visitors, and one for pedestrians—ensure that only authorized individuals gain entry. The day I met with Carlos, I tried my luck at getting into Casuarinas immediately after visiting AFNH, but failed to make it past the multiple security guards. Despite being turned away at the gate, my journey to Casuarinas was instructive. First, it took almost an hour on two separate buses to arrive, a testament to how two adjacent spaces can be simultaneously proximate and distant. Second, the contrast between one side of the hill and the other was startling. After getting off the combi at the stop closest to the Casuarinas gates, the delivery man at a corner KFC informed me that there is no public transportation that goes directly to the community and recommended that I take a taxi. Instead, I walked ten minutes past gated streets and an impeccably maintained grassy park with its own state-of-the-art security kiosk. The automobile traffic, in contrast to the rest of Lima, was sparse, but when I noticed two lines of five cars at a traff ic light, including two identical white BMW SUVs among other luxury cars, I knew I was nearing the gates.

The concrete border between AFNH and Casuarinas has provided journalists with a jumping-off point to report on economic inequality, discrimination, and uneven development in Lima and beyond as they relate to questions of infrastructure, security, and private property within urban space. However, the wall that separates AFNH from Casuarinas is just the latest extension of a 10-kilometer barrier whose construction commenced in the mid-1980s and has continued for three decades. At present, the wall in its entirety constitutes a border between the well-off municipalities of Santiago de Surco and La Molina on one side, and the poorer municipalities of San Juan de Miraflores and Villa María de Triunfo on the other.

The wall began as a means of cordoning off the elite Jesuit school, La Inmaculada, from its surroundings in 1985. First constructed in Lima’s historic colonial center in 1878, in the 1960s the school moved to its current location on a Surco hillside bordering San Juan. I interviewed an administrator from La Inmaculada, who I’ ll call Mr. Hernández, in December 2018. When I questioned him about the move to Surco several decades earlier, he described the school as a “pioneer,” one of the only institutions in what was then an unoccupied area, with the exception of a handful of farms and country estates. The location was so unusual for an institution serving Lima’s elite families, who at the time resided in the districts of San Isidro and Miraflores (not to be confused with San Juan de Miraflores) that the school had to provide private transportation for its students in order to retain enrollment.

When I asked Hernández what provoked the construction of the wall more than 15 years after the school’s move to Surco, he said, “since the 1960s, there was a heavy wave of migration from the countryside to the city, and there were also a lot of invasiónes.” In Peru, the word invasion is commonly used to refer to squatter settlements. Hernández went on to clarify that “in the ’60s there was migration, but it wasn’t so resounding. Afterwards, there was a really heavy [wave of ] migration.” By the 1980s, he noted, “terrorism in the countryside”—a reference to the Shining Path insurgency—became an additional push factor for rural Peruvians fleeing danger. This migration, he explained, was accompanied by illegal land trafficking—a practice associated with the squatting-to-owning process in districts like San Juan, whereby substandard lots that are not integrated into the formal real estate market are sold to poor, often immigrant families—in areas surrounding the school. Though he didn’t directly state that Lima’s new inhabitants were themselves threats, he explained that the wall was necessary to protect students from Lima’s swelling population, which consisted mostly of poor immigrants from the Andes. La Inmaculada thus initiated the process of building a concrete border between Surco and San Juan.

Hernández’s account is a euphemistic version of the story of Lima’s unequal growth. His narrative, while sympathetic to the need for people from Peru’s provinces to migrate to the capital, highlights a key way that Lima’s rich have historically reinforced race and class differences through the manipulation of urban space. After establishing Lima as the capital of the Spanish viceroyalty of Peru in the 16th century, colonists designed the city to ensure separation between elite authorities and the large Indigenous and Black slave population, who they depended on for labor. When La Inmaculada was founded in the late 19th century— just five decades after Peru’s independence from Spain— Lima’s social geography roughly followed colonial patterns of segregation.

Leigh Campoamor is a cultural anthropologist and a Visiting Scholar at the NYU-Gallatin Urban Democracy Lab. Her current book project takes child street labor in Lima as a node for assessing gender and generationality, transnational development, urban social movements, and everyday experiences of poverty. She is also conducting research on corporate social responsibility, digital activism, and consumer-citizenship in Latin America.