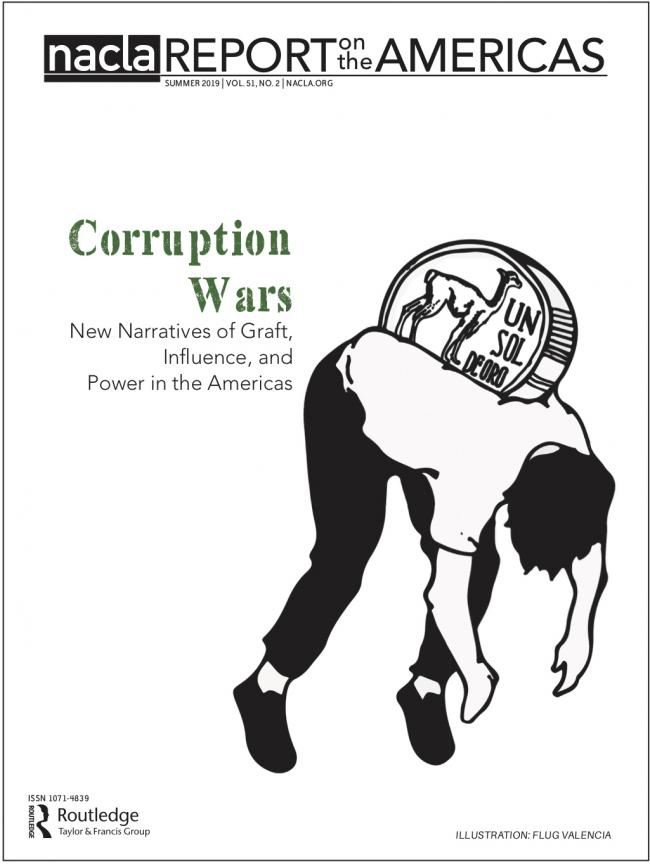 “Yo detesto las argollas … cuando estoy afuera” (“I hate argollas … when I’m outside of them.”) The term “argolla” refers to the rings of corruption that operate at nearly every level of Peru’s political system. If you’re outside of one, even basic processes become impossible to carry out. Being inside of one is a matter of political necessity, yet it perpetuates a system of engrained graft and corruption. The quote, from a Peruvian university student speaking to issue contributor César Nureña, refers to the mundane exchange of favors with bureaucrats to secure opportunities or to move paperwork through a bogged-down system. The student’s statement speaks to the totality of corruption in Peruvian society, the complexity of its functioning, and the prodigious challenge of rooting it out. Far more dramatic, at the highest echelons of political power, one of Peru’s most consequential corruption rings cracked on April 17, 2019, when former Peruvian president Alan García committed suicide in order to avoid preventative detention related to the Odebrecht investigations.

Corruption, the issue we take on in our summer issue of the NACLA Report, has been at the center of many controversies across the Americas in recent years, with international media breathlessly covering fallout from the Odebrecht scandals and Brazil’s Operation Lava Jato (Car Wash). Mexican president Andrés Manuel López Obrador owes his recent landslide electoral win to his focus on fighting institutionalized graft, which Edwin Ackerman tackles in his article on the history of corruption in Mexico under the PRI. Meanwhile, Guatemala has become the epicenter of a fight for power and accountability as its president attempts to oust an anti-impunity body investigating his own family, covered in Rachel Schwartz’s piece on the International Commission Against Impunity in Guatemala (CICIG).

Given the structural context of even the smallest acts of corruption, we raise questions about the organizational capacity—and even purpose—of institutions established to combat corruption, especially as some appear to tacitly reinforce established practices. Thus, we highlight how the Lava Jato investigations in Brazil were weaponized as a tool for the extreme Right to gain power. While the Right advanced a narrative that corruption became professionalized under the PT, Ben Fogel’s piece on the history of corruption in Brazil presents a more complex picture. Similar maneuvers have unfolded in El Salvador, as Hilary Goodfriend explores in her piece on how public prosecutors investigating three former Salvadoran presidents have been particularly heavy-handed with former progressive left-wing president Mauricio Funes. The partisan and undemocratic use of prosecutorial power has been the target of the judicial struggles, including by judges such as Tirza Flores Lanza of the Honduran Judges for Democracy, profiled by Heather Gies in this issue.

There is no better time to approach the question of anti-corruption, its achievements and limitations, as well as its propensity for political manipulation. Oftentimes, corruption discourses are framed in ways that suggest corruption is only a problem affecting countries of the Global South—one that does not affect the hallowed halls of “good governance” in countries of Western Europe or the United States. Yet the articles herein challenge this notion, and explore the multiple definitions, histories, and uses of corruption across the region. These analyses view corruption as more than the illicit exchange of favors between individuals, but as a structural phenomenon with far-reaching, international consequences.