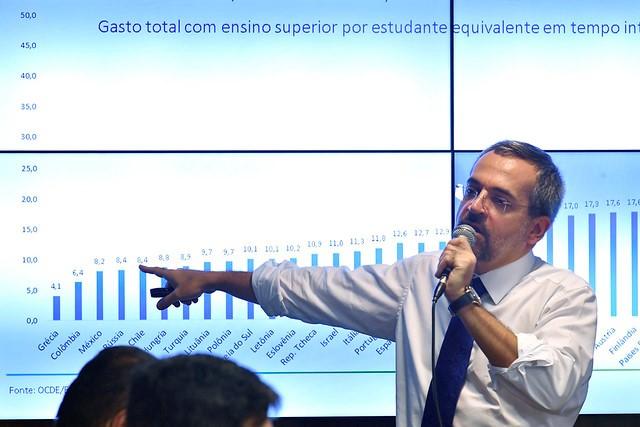 In Brazil, far-right politicians and their supporters have declared war against the social sciences and humanities. Why? There are many answers to this question, but only one gets to the root of the issue: political figures like Jair Bolsonaro and his appointees’ attack on the social sciences is their way of keeping the racial status quo intact, and to disrupt any progress it has made.

The study of social sciences poses a threat to Brazilian white supremacy in two ways. First, significant theoretical developments emerging from the field have challenged notions of racial democracy, shifting conversations in Brazil around race and successfully ushering in substantial changes to global and local understandings of racism and mobilizations in response to it. Second, policy-oriented research has effectively achieved a silent revolution, culminating in a racial and economically-based affirmative action strategy. Government officials like Weintraub and Bolsonaro sense these shifts and see them as directly endangering their supremacy in Brazilian society. In response, they deploy nationalistic discourses of unity and mestiçagem (miscegenation) to defend their positions. This strategy was evident in one of the Education Secretary’s first public hearings in Congress.

“We Are all Mutts”

On May 7, 2019, Brazilian Secretary of Education, Abraham Weintraub, spoke before the Senate’s Education, Culture, and Sports Commission to present his plans for the current year. After his presentation, some senators asked him about the budget cuts—or “contingencies” as he continually referred to them—to public universities and early education programs. Weintraub’s responses made his antagonism to the social sciences clear. For instance, he used the experience of Japan as an example for why the government should defund the social sciences and humanities in public universities. He also said that children should not study social science disciplines before reaching “a degree of maturity.” Although the secretary did not elaborate on what an acceptable level of maturity would be, he seemed convinced that these sorts of courses should only be offered at the graduate level.

However, it was the secretary’s personal stories and constant use of racialized language that confirmed his discomfort with themes covered in social science classes. As the secretary answered some of the senators’ questions, he persistently used the word “mutt” (vira-lata) to highlight his and the Brazilian population’s miscegenation, doubling down on the narrative that there is no racism in Brazil because “we are all mutts.” He legitimated his comments because, as he declared, half of his family had Indigenous and Black heritage (which, he noted, could be proven by DNA test), and were, therefore, “truly Brazilian.” And the other half was from northern Europe, and therefore, “white like a sheet of paper,” as he said. The secretary’s skin color, which he considered to be brown (moreno), was, according to him, the result of a mixture of northern Europeans with Brazilian northeastern,caboclos (mixed-race) from Ceará state.

Weintraub claimed that this background exempted him from any accusations of racism. “We are mutts, and we have this characteristic of being more tolerant,” he said. He connected miscegenation with unity, and any efforts to point out differences between the racial experiences of different groups as a disruption to this harmonious unity. “Trying to divide people is a recent thing,” he said. “You are of this race; you are of that race [...] that did not exist before. We are all Brazilians.” In his view, talking about race at all constituted a “threat” to national unity. Finally, he urged Brazil to return to the widespread use of language of racial democracy. “We must start to see Brazil as a whole; in fact, as it has always been seen, we have to see ourselves again as this mixed-race nation.”

Although his comments appeared somewhat apropos to the budgetary matters being discussed, that he brought them up in such a setting reveals the Secretary’s antipathy towards social scientific research that highlights persistent racial and ethnic disparities in Brazil. In the secretary’s understanding, anti-racist activists, Indigenous rights groups, and academics are creating divisions in society rather than responding to real concerns about inequality. In using anecdotes about his family, the secretary claims to be critiquing the “discourse of separation” that he believes must end in Brazil. But what he really wants is to erase any conversations about race relations in Brazil, so that white elites may continue wielding power in the country. His comments are part of a long legacy of masking racial inequality in Brazil in favor of focusing only on economic equality. Understanding Brazil’s long legacy of racism can help explain why Weintraub’s views are so pernicious.

The Myth of Racial Democracy

In 1888, Brazil became the last country in the western hemisphere to abolish slavery. The following year, Brazil became a republic, strongly influenced by a positivist ideology of science and reform imported from France. Even before the First Republic (1889-1930), the Brazilian scientific community was already importing ideas from Europe and the U.S., heavily inclined towards eugenics. The fears unleashed among white elites in Brazil after slavery ended created a perfect concoction for perpetuating racist ideas and practices across the country. The combination of eugenics and positivism made the Brazilian elite perceive the country in a state of degeneration and decay. In response, between 1850 and 1932, the government began subsidizing European immigration in an effort to whiten the population culturally and racially—in order to save the country from what they saw as complete cultural and biological regression. As scholar Thomas Skidmore has written, “Brazilians generally regarded whiter as better, which led naturally to an ideal of ‘whitening,’ articulated in both elitist writings and popular folklore.” But whitening policies had the opposite effect, as they increased regional and racial tensions in Brazil.

Around the 1930s, a disarming of what sociologist Antonio Sergio Alfredo Guimarães called an “ethnic bomb” marked a shift in Brazilian national racial discourse. This new narrative stressed the fusion of races rather than the whitening of the people. Gilberto Freyre (a famous U.S.-trained Brazilian anthropologist) became the face behind the newly created concept called “racial democracy,” an ideology similar to “colorblindness” in the United States. Although this ideology never actually provided the government with policies to address systemic structural inequalities, it was successful in masking discrimination in favor of a supposed common “mixed” origin of all Brazilians.

However, in the 1950s, UNESCO sponsored a series of empirical studies to attempt to understand the Brazilian “successful” racial experience so they could apply it to other parts of the world. Sociologists and anthropologists from Brazil, such as Florestan Fernandes, Thales de Azevedo, René Ribeiro, and Luiz de Aguiar Costa Pinto, and from abroad, including Charley Wagley, Roger Bastide and Alfred Métraux, collected and analyzed data in cities such as Rio de Janeiro, Recife, São Paulo, and Salvador. In general, these studies showed that Brazilian racial democracy was a myth and that non-white people experienced racism in the job market and difficulties in climbing the socioeconomic ladder. Based on UNESCO’s published findings, several other empirical studies concluded that racial democracy was, in fact, an ideology that occluded racism and made it more difficult for Black and Brown Brazilians to close opportunity gaps with the white population. For historian and anthropologist Lilia Schwarcz, “racial democracy” was entirely discredited when the Black activist movement fighting for real equality and inclusion denounced the perils of following its ideology. By simply refusing to contend with racial inequalities, political and economic elites can rest assured that their roles in perpetuating racism will not be questioned.

Taking Off the Blindfold

Social sciences have also played a role in providing the necessary data for politicians to work with and create inclusive public policies—something the Bolsonaro government is not at all interested in doing. After publicly acknowledging historic racial disparities, the Fernando Henrique Cardoso (1995-2003) and Luiz Inácio Lula da Silva (2003-2011) governments took institutional measures to address them. Perhaps the most important was the implementation of affirmative action through racial quotas in universities and other areas of public service. According to the National Household Sample Survey (PNAD), after more than 15 years of affirmative action programs in Brazil, the number of Black and Brown Brazilians who graduated from universities grew from 2.2% in 2000 to 9.3% in 2017. Their advancement, to people like Weintraub, marks a dangerous “division.” Homogenizing all Brazilians as the same race means Weintraub and others can turn a blind eye to racism. If we are all the same, racism does not exist, and policies that address racial inequality are unnecessary and even harmful.

Weintraub’s efforts to return Brazil to its myth of racial democracy should be of deep concern to anyone interested in decreasing Brazil’s persistent inequalities. Research undertaken by social scientists, who have constructed new questions, methods, and analytical strategies, have informed public policies and facilitated the implementation of reforms that address structural racism. Ignoring racial inequality worked well for dictators like Getúlio Vargas in Brazil and Antonio Salazar in Portgual.

We cannot separate comments like Weintraub’s from the government’s open attack on diversity and multiculturalism—to the point that even commercials are facing censorship for highlighting too many non-white Brazilians. Consequently, criticizing and threatening to defund the social sciences and humanities, masked by the seemingly-innocuous language of “racial democracy,” deconstructs rights and progress Black and Brown populations in Brazil have fought to achieve. It is a way to perpetuate the racial hierarchy that keeps people like Weintraub and Bolsonaro in the elite halls of power.

Rodrigo Serrao is a doctoral candidate at the University of South Florida. His research examines how different racial ideologies inform the practices of first- and second-generation Brazilians and non-Brazilians in the context of a multiethnic congregation in South Florida.

The author would like to thank Dr. Elizabeth Hordge-Freeman and Dr. James Cavendish for their insightful comments on previous versions of this essay.