A Narrowly-Avoided Constitutional Crisis in Peru

After months of power struggle, Peru’s President successfully challenged Congress to take on his anti-corruption agenda, narrowly avoiding a constitutional crisis. Will they follow through? 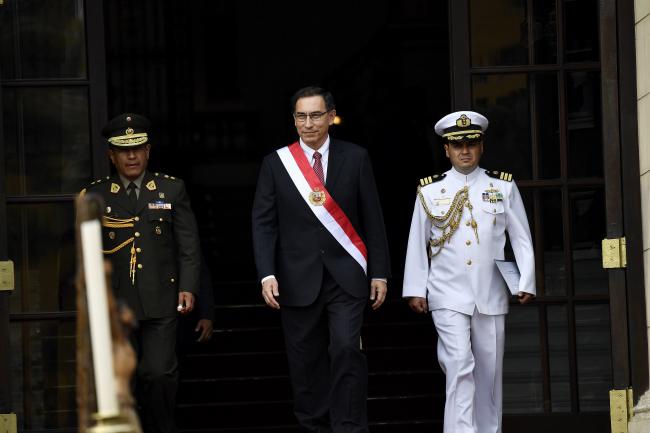 On Wednesday, June 5, Peru’s Congress agreed to commit to passing a package of constitutional reforms aimed at combating corruption and impunity—one of the most pressing issues for both the administration of President Martín Vizcarra and the vast majority of Peruvians who are increasingly fed up with the government in the wake of major corruption scandals. Following months of a heated power struggle between Congress and the president, in approving a so-called cuestión de confianza to implement the reforms, Congress narrowly avoided a constitutional crisis that could have led to President Vizcarra dissolving the legislative body entirely.

Though he began the year on a high note by signing into law another series of anti-corruption reforms approved by constitutional referendum in December, President Vizcarra’s approval ratings have since declined with each successive month as his legislative agenda languishes. Meanwhile, he has been criticized for everything from failing to disclose professional links to Odebrecht prior to entering politics, to taking a trip to Spain while Peru suffered through intense flooding. He has also been the subject of a corruption investigation dating back to his tenure of Governor of Moquegua, joining the list of Peruvian heads of state to either be imprisoned or under investigation for corruption. On top of that, right-wing politicians and commentators have continuously suggested that Vizcarra’s anti-corruption crusade could simply be a ploy to maintain popularity as he turns to less democratic ways to push his agenda—with the threat of dissolving Congress as a first step.

Frustrated by Congress’ unwillingness to vote on a new package of reforms, President Vizcarra delivered a televised address to the nation on May 29 announcing his intention to bring a cuestión de confianza before the Peruvian Congress. A cuestión de confianza is a consultation that a president can bring before Congress in extraordinary situations to ensure Congress’ explicit support for either a broad legislative agenda or a specific issue. If rejected or the head of Congress quits, the presidential cabinet must resign. Such was the case for Pedro Pablo Kuczynski’s first cabinet (PPK) during his embattled tenure as president when he put forth a cuestión de confianza that was rejected. According to Peru’s Constitution, Congress can only reject one cuestión de confianza per five-year presidential term. If rejected twice, the President has the power to dissolve Congress and hold new legislative elections within four months.

In this case, the cuestión de confianza concerned six constitutional reforms related to anti-corruption. These reforms were outlined in a report published by a special anti-corruption task force that President Vizcarra had authorized this past December and submitted to Congress on April 10. They include changes to how political parties are registered, opening primary elections to encourage civic participation and a more democratic selection process of candidates. They also grant the Supreme Court the power to remove parliamentary immunity, and implement a campaign finance reform that criminalizes illicit funding practices, and applies gender parity quotas. Finally, it eliminates the voto preferencial (preferential vote), which allows voters to select candidates—regardless of party affiliation—based on a preferred list provided by a political party or coalition, and changes laws around electoral eligibility by, for example, barring candidates who have been convicted of a crime from running for public office.

Prior to last week’s vote, a Constitutional Commission led by right-wing Fuerza Popular (Popular Force) congresswoman Rosa Bartra and composed of other fujimorista legislators, had only discussed two of the twelve reforms. Tensions began to escalate in May when the Commission unceremoniously rejected the reform that would strip parliamentary immunity just days before members of the presidential cabinet were scheduled to meet with Congress to determine next steps. As a result, President Vizcarra instructed his cabinet ministers to skip the meeting.

Like his predecessor Pedro Pablo Kuczynski (PPK), who resigned in March 2018 amid corruption allegations, President Vizcarra has been at odds with the right-wing fujimorista-dominated Congress since taking office. Leading up to the televised announcement, the President accused Congress of not prioritizing his reform policies to further the country’s anti-corruption efforts, though a meeting held in mid-May seemed to temporarily quell the conflict between the Executive and Legislative branches.

Adding fuel to the fire was a decision by the Permanent Assembly, a congressional committee, to dismiss corruption charges against former Attorney General Pedro Chavarry and not revoke his license to practice law. The decision, along with the shelving of the proposed reform to parliamentary immunity, came just two days after an 8.0 magnitude earthquake struck the country, resulting in widespread indignation both from the public and many politicians. An anti-impunity protest held in Arequipa coincided with the president’s attempts to reassert his political agenda.

Chavarry is an especially reviled figure in Peru. He resigned his post in early January amid public pressure and is alleged to have participated in a corruption ring known as Los cuellos blancos del Puerto (the white collars of Puerto, referring to a wealthy district in Callao). The scandal revealed, via leaked audio recordings, an influence-peddling scheme among members of the Peruvian judiciary in July 2018, a topic César Nureña and Federico Helfgott covered scandal in more detail in their article for NACLA’s summer 2019 issue. As street protests against corruption erupted around the country and cabinet ministers were dismissed, President Vizcarra embarked on his aggressive anti-corruption campaign.

President Vizcarra appears to have the public on his side. When a constitutional referendum was held in December of last year, Pervuians overwhelmingly approved three out of four proposed anti-corruption measures, in seemingly harsh rebuke of the fujimorista legislative majority. Vizcarra’s approval rating spiked as a result. Since then, however, his attempts to implement further reforms have been stifled by the fujiaprista alliance in Congress (members of Fuerza Popular and APRA) through legislative inaction, over-scrupulous and sluggish debate, and the dismantling of key aspects of the proposals.

This is the second cuestión de confianza brought before Congress since Vizcarra took office in March 2018. The first, which he also brought forth due to the lack of legislative progress, concerned constitutional reforms proposed by the Vizcarra administration in August 2018. In that case, Congress approved the legislative agenda outlined via the cuestión de confianza—which Vizcarra put forth in advance of the referendum vote held in December. This time around, however, the Vizcarra administration took a more aggressive stance, initiating a constitutional crisis in the process.

It was initially unclear, for example, whether or not the Executive Branch had the power to make Congress approve constitutional reforms, let alone impose a deadline, i.e. June 15, the end of the current legislative session. Also of concern was whether or not PPK’s cuestión de confianza, which Congress rejected in September 2017, counted toward this second one brought forth by a different president during the same presidential term. This same issue came up when the Vizcarra administration presented a first cuestión de confianza in September of 2018.

The Vizcarra administration interpreted the Constitution to uphold the results of each cuestión de confianza posed during a presidential term regardless of the change of power. This would have then given him the power to dissolve Congress if this vote is not passed. In the interim, the Permanent Assembly, a congressional committee that cannot be dissolved, would have assumed Congress’ duties, pending legislative elections.

Even though it was approved, the cuestión de confianza is not legally binding. It merely provides a framework for Congress to work with the President on legislation. That process resumed on Thursday, June 6, when the Constitutional Commission set a schedule to debate the proposed reforms. The President of the Council of Ministers Salvador del Solar then returned to Congress the following Monday to discuss each of the reforms, in particular the proposal to bar candidates who have been convicted of a crime, which was later approved. That same day, however, fujimorista legislators used their votes to dismiss two additional charges against ex-attorney general Pedro Chavarry, again sparking immediate outrage.

Congress was supposed to recess on June 15, when five of the six constitutional reforms were still pending, but President of Congress Daniel Salaverry announced on Saturday that Congress would remain in session until July 25 to debate the remaining legislation. The proposal concerning restrictions to parliamentary immunity continues to be the most controversial.

A Hint of Authoritarianism

Street protests that took place in Lima on the day the cuestión de confianza was presented were an early indication of popular support for dissolving Congress. Recent polling confirmed that most Peruvians support this action if the constitutional reforms are not passed. Reservations over how far the government should go in its efforts to combat corruption seem to have dissipated since the unexpected suicide of ex-president Alan García on April 17 after he received an order of pretrial detention for alleged ties to the Odebrecht corruption scandal.

For President Vizcarra, the successful challenge to Congress’ obstruction of his legislative agenda has already boosted his approval ratings, even if his willingness to go outside of the typical legislative process to do so may ring some alarm bells. Such was the case in 1992 when President Alberto Fujimori announced a coup with enthusiastic support from the citizenry. Like Vizcarra, Fujimori faced a majority opposition in Congress and struggled to push through legislative reforms, in this case, related to combating terrorism and revamping the economy. Both heads of state also made a televised addresses announcing their intentions, though tanks did not roll in the streets this time around as and President Vizcarra stood before a podium surrounded by the National Assembly of Regional Governors. Vizcarra, for his part, has attempted to alleviate any concerns about similarities to Fujimori by stating that he will not run for reelection. Last month, Congress made sure he would stick to that promise by prohibiting Vizcarra from immediately running for reelection.

Fuerza Popular has come out of the last few months weakened, leaving the Vizcarra administration with a larger opening to push through its legislative agenda. Fuerza Popular leader and former presidential candidate Keiko Fujimori is still in prison on corruption charges related to the 2011 elections. The party, also facing allegations of corruption related to the Odebrecht scandal, lost an absolute majority in 2018 and continues to fracture, as evidenced by a divided vote with regard to the cuestión de confianza.

For now, Vizcarra retains popularity, but for how long will depend on the response from Congress and his willingness to increasingly employ what the right-wing characterizes as authoritarian tactics, regardless of their constitutional-backing. Meanwhile, Peru’s political institutions, each of them still suspect when it comes to corruption, including the executive office, have withstood a constitutional crisis, at least for the time being.

Nestor David Pastor is a writer from Queens, NY and NACLA’s Outreach Coordinator. He is the founder of Huellas, a forthcoming bilingual magazine of long form narrative non-fiction. Follow him @ni_soy_pastor.