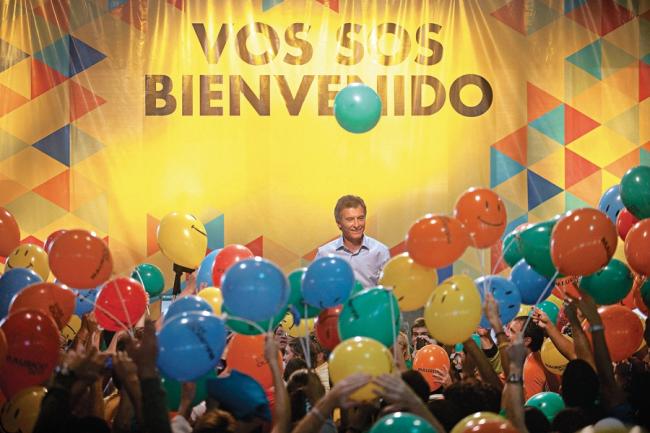 President Mauricio Macri's yellow balloons—those that floated high during his 2015 presidential campaign— suddenly deflated on August 11. Macri and his coalition, Cambiemos, lost by a landslide to the "Fernández formula" in the polls to officially choose which candidates will be on the ballot in the upcoming October presidential elections. Although the election was more symbolic than consequential—as the main parties presented only one candidate—it is highly unlikely that Macri will recover from this brutal blow by October.

The Fernández formula—Alberto Fernández and Cristina Fernández de Kirchner (CFK)—won by 47 percent against Macri's 32. Four years ago, when Cambiemos won by a small margin, the yellow balloons flew high up in the skies, symbolizing the happy faces of the new Argentina Macri promised: one with lower inflation and less poverty. However, since those heady early days, as Macri himself infamously declared, "things happened"—things that Macri could not solve.

In his attempts, though, Macri brought back the International Monetary Fund (IMF), an institution directly responsible for Argentina's economic debacle of 2001. Since then, Macri has increased Argentina's debt by $50 billion, while public debt has more than doubled. Even with this cushion, inflation passed 50 percent, the gross domestic product decreased, and unemployment grew to a higher rate than when he was elected. The economy is in recession, as the devaluation of the peso has made it too expensive to import supplies, while local production cannot compete with global prices given the massive hikes in the price of electricity, natural gas, and gasoline. The primary on August 11 was a clear indication that the Argentine electorate has grown frustrated with Macri’s failure to deliver on his promises.

A candidate of global capital and local landlords, Macri reached power in 2015 in large part due to the lack of a viable opponent. Mounted on the public perception of CFK’s corruption, Macri fed off his opposition's weaknesses through promises of an economic rebirth. The message got through, as at the end of CFK's second presidency, the Argentine economy was starting to show signs of strain. The successes of CFK’s husband and predecessor, Néstor Kirchner, at adapting neoliberalism to the needs of a country in the South were beginning to wane, as inflation rose, increasing the price of food significantly. CFK tried to counter the effects of the 2008 international economic crisis by placing restrictions on individual purchases of dollars, the cepo. The middle class felt threatened by the implementing of the cepo, as they could not protect their savings from growing inflation.

Furthermore, under the Kirchners, global corporations continued to extract natural resources and run the utility companies, although the latter were heavily monitored. The population, however, was protected in this model not only by controls set by the state on tariffs, but also through state subsidies that covered gas, electricity, natural gas, and transportation. The Kirchners instituted welfare, access to education for marginalized groups, employment opportunities, and other populist policies through the redistribution of resources generated by high taxes on global commodities, as well as through implementing controls over the exchange rate with the dollar. Imports from abroad were kept in check to allow for a partial rebirth of national industry. However, when the price of global commodities fell—especially genetically modified soy— Argentina's economy suffered greatly. The middle class listened to Macri's rants against Kirchner corruption regarding mismanagement of public funds and increases in the personal wealth of public officials. Feeling the strain of higher taxes, the middle class was quick to blame the economic woes not on the global markets, but instead on the poor that were receiving subsidies from the state, and on the Kirchners who had created the subsidies.

During his campaign, Macri promised to lower unemployment and inflation by generating a "shower" of global investment. This investment never happened. Instead, unemployment and inflation grew. Macri was anxious to please his allies: the powerful owners of huge extensions of land—the terratenientes—and the global financial interests tied to the large scale exports of raw materials such as grains. Macri eliminated export taxes on soy and grains. Once the much hailed shower of investment proved nonexistent, Macri sought to replace the funds lost with the elimination of taxes on commodities expors with loans from the IMF.

The IMF became a steadfast friend to Macri. It not only supported him with loans at the beginning of his tenure, but, quite surprisingly, also when it became clear, in March 2018, that the Argentine economy was going down. From that point on, Argentina's economy went into a downward spiral, pushing more than four million previously middle class Argentines into poverty.

For the middle class, the yellow balloons promised well-being, and Macri’s economists claimed that it was the poor’s lack of frugality that had rendered the nation impoverished. By banking on long-standing racist traditions of the middle class that envisions working-class people of color as lazy, Macri convinced the middle class that the problem was with the population. He managed, for a while, to maintain their support. However, as the economy worsened, his excuse of the "heavy burden" inherited from the Kirchners stopped making sense. Soon, even the middle class realized that his happy yellow balloons were fragile and bound to explode.

Faced with a similar economic situation—but with the Peronists unable to offer an electoral alternative—the social movements in 2001 responded by taking over cities and streets, facing state violence until they forced then-president Fernando de la Rúa to resign. De la Rúa famously left the government house in a helicopter, unable to make his way through the streets of Buenos Aires. While predictions regarding Argentine politics are risky, it is possible to envision a calmer transition of power, with Macri handing over his bastón de mando to Fernández and having his chauffeur drive him back home—although maybe a little earlier than originally planned. The reason being that the great strategist behind Macri's spectacular downfall, CFK, has been adamant in calling for an electoral transition that will avoid yet another pueblada (uprising) in Argentina.

The Return of CFK

CFK, famous for her unpredictable political moves, stepped back and asked Alberto Fernández to be the presidential candidate, choosing the vice presidency for herself. By doing so, she was able to pacify the anti-Kirchner Peronists who had voted for Sergio Massa in the 2015 election. Massa's campaign was mostly centered around his promise to apply mano dura (iron fist) to address issues of insecurity due to perceived high rates of burglary and petty crimes. In 2015, CFK’s Partido Justicialista lost the election when she was unable to get the more conservative Peronists to back Daniel Scioli, her candidate.

The move to place herself behind Fernández was both unexpected and highly risky. Fernández, originally Néstor Kirchner's chief of staff, continued in that position under CFK’s government, but left with harsh critiques of CFK's administration. He said that CFK was in denial of rising poverty, manipulated economic data to her advantage, destroyed the economy, and put in place a cepo on the dollar. By choosing Fernández, CFK risked alienating left-leaning Peronists. However, they acquiesced, aware that without the votes of the conservative Peronists, they might not be able to take down Macri.

While Fernández’s candidacy pacified vast sectors of the conservative Peronists and the middle class, there was still the issue of the blue scarves versus the green scarves of the campaign to legalize abortion.

Feminists have been organizing for free, legal, safe abortion for many years in Argentina. Their symbol is the green scarf. They have faced tenacious opposition from many sectors of society: the blue scarves. Late to the mass mobilization of La Marea Verde (the Green Wave) for free, legal, and safe abortion, CFK had opposed legalizing abortion during her two-term presidency. However, after she assumed the position of senator, she campaigned for legalization as part of the opposition. Her proposed bill passed in the Lower House last year, but was voted down in the Senate. Senators from the most conservatives provinces—both Peronists and representatives of the Propuesta Republicana (PRO)—most of the evangelicals churches, Jorge Bergoglio (Pope Francis), and a myriad of religious high schools and organizations mobilized to defeat the bill. CFK called on the Kirchner militants to put aside their stance on the issue and accept a alliance that included the blue scarves. Faced with little choice, and horrified by the speed at which the economy was deteriorating alongside Macri’s repression of the protests against him, vast sectors of the Marea Verde appear to have voted for the Fernández formula in the primary.

In this way, CFK was able to set herself up as the only viable alternative to take down Macri. In this highly polarized primary, CFK's strategy operated like a vacuum cleaner on both the revolutionary left’s votes, Frente de Izquierda, and, most importantly, on the votes for the outlier of the Peronists, Roberto Lavagna.

The big question ahead now is how CFK’s highly diversified alliance will govern after the October elections. With the streets quiet, in response to CFK’s move to avoid major uprisings, and Latin America’s Pink Tide governments left with less power than in the past, CFK’s next government might not have the same leverage she was once able to wield against the IMF. And yet, as the financial markets punish Argentines over their vote, Macri continues to blame the people of Argentina.

Graciela Monteagudo is an Argentine community artist/organizer and scholar. She is the associate director of the Social Thought and Political Economy program at the University of Massachusetts, Amherst.