We Are All Workers

Read the editor's intro to our latest print issue, "We Are All Workers," which focuses on Labor in the Americas. 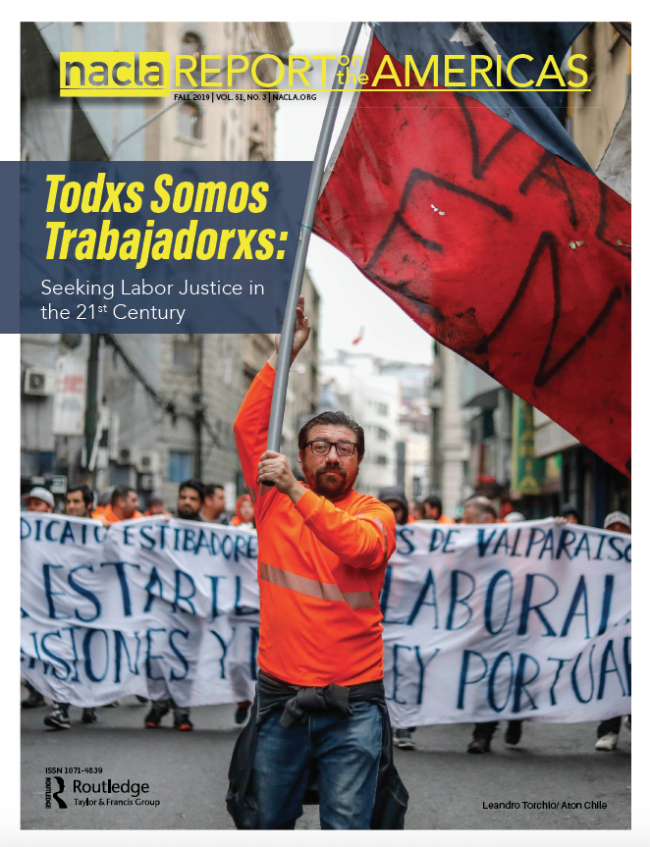 “Tough Times:” This was the title of a 1999 NACLA Report focused on labor, summarizing the grim outlook for the region’s workers at the time. Published at the height of Latin America’s neoliberal fervor, just a few years after the North American Free Trade Agreement (NAFTA) had launched and just a few years before the rise of the Pink Tide, the issue lamented “the decline of the steady job in Latin America,” the stagnation of wages amid austerity policies, and the rollback of hard-won labor rights.

Twenty years later, those “tough times” feel all too familiar. Then, as now, workers around the world are uniting in struggle to claim and reclaim rights. But important geopolitical shifts have reconfigured how labor and laborers understand power. Growing recognition of the significance of unpaid, feminized, and informal work have informed debates around the future of labor justice, broadening the definition of what work is and what it means to be a worker. The stakes could not be higher, or more urgent—as Alejandra Dinegro Martínez notes in the pages ahead, labor is “a question of people exchanging their freedom for pay.”

Booming technological innovation has fueled the explosion of gig economies, in the process making it more difficult, as Dinegro Martínez writes, to identify the target of workers’ struggles. “My boss is an app who exploits me,” Chilean Congressperson Gabriel Boric has said, referring to apps like Uber and Lyft, highlighting how expanding definitions of what constitutes work and who carries it out have also expanded definitions of who the boss actually is. In a globalized world, multinational companies define business priorities and employee or contractor policies, from food delivery to mineral extraction, with little recourse for workers. Uber is one such example, as Brandon Hunter-Pazzara discusses in his multi-layered piece on the violent—even deadly—battle between taxi drivers’ unions and the app in the Maya Riviera.

This issue explores these struggles across various contexts, which when taken together force us to reconfigure and at times cast aside old notions of labor, laborers, and labor struggles. For instance, as Leigh Campoamor argues in her piece on child workers in the streets of Lima, we must understand child labor as a form of emotional work in the context of family struggles for survival amid state neglect. It’s a point that Silvia Federici, interviewed by Graciela Monteagudo, powerfully underscores when addressing sex work: a feminist focus on labor rights must denounce exploitation across industries, both in the context of the fight to decriminalize sex work and beyond. “It is not only sex workers who are exploited, who are forced to work in conditions that destroy their lives,” she says. “This is the condition of the majority of workers across the world.”