Silenced No More in Peru 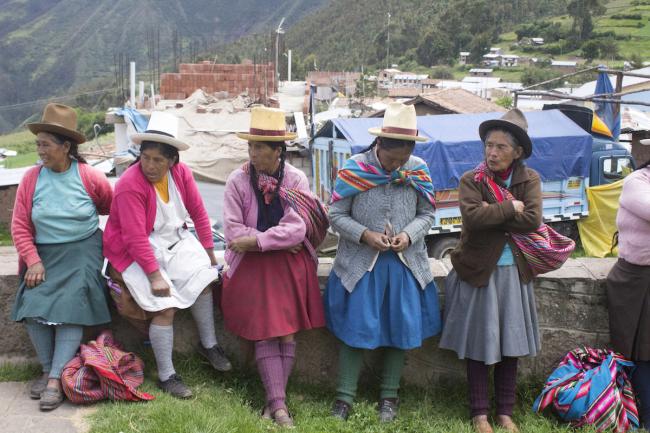 Warning: This piece contains graphic descriptions of sexual and reproductive violence against women.

On the morning of March 21, 2019, a group of women congregated outside the regional district attorney’s office in Sicuani, in the Canchis province in southern Peru. Though it was only a little past 9 AM, the Andean sun was already high and relentless. The women’s polleras, a traditional Quechua skirt, flashed brilliant yellows and blues and pinks as they began to form a line that wrapped around the corner. They had come to officially register the testimony of their forced sterilizations with the Peruvian government.

“Fujimori ordered them to do this to us so that we cannot have children,” Benedicta Bendezú Huamán told me, standing among a group of nine women outside the attorney’s office, referring to former authoritarian president Alberto Fujimori (1990-2000). Benedicta spoke in Quechua, as did the majority of the women who shared their testimony with the National Registry of Victims of Forced Sterilizations (REVIESFO) office that day. Although since 2016 the victim-survivors of the Canchis district have been organizing for acknowledgment of what they endured, they were unable to add their names and testimonies to the national register until this past March because the only place they could do so was in Cusco, more than 150 kilometers away.

Though estimates vary, Peru’s Health Ministry estimates that over 200,000 Indigenous women in Peru were sterilized against their will between 1995 and 2001 as part of then-president Alberto Fujimori’s National Program for Reproductive Health and Family Planning (PNSRPF). And although human rights lawyer Giulia Tomayo sounded alarm bells about the nefarious and inhumane nature of the program as early as 1996, these women’s stories have gone largely untold in Peru. After Fujimori f led the country in 2000 in the face of various corruption scandals, the forced sterilizations were left out of Peru’s 2001 Truth and Reconciliation Commission (CVR). Their civil case against Fujimori and several of his top former ministers first opened in 2002, but it has been delayed and repeatedly archived for 16 years.

This past November 2018, the women’s lawyers refiled charges, reopening the case and giving thousands of victim-survivors and activists in Peru renewed hope for justice. Collecting new testimonies to add to the Ministry of Justice’s national registry—as well as providing state-sponsored medical care and legal counsel to these women and their families—is a key and unprecedented way that the Peruvian government is supporting these victim-survivors. Not only was Benedicta able to share her story with the government for the first time, but she was able to do so in her native Quechua tongue—a service that was not available even three years ago, when the case was last archived in July 2016.

Furthermore, many activists and experts see the slow decline of the Fujimori family’s political cachet as opening a key window of opportunity for these women: government officials may finally be willing to listen. Robert Chávez Hurtado, the director of Peru’s Public Defense and Access to Justice program in Cusco, told me that over the course of the three-day REVIESFO program in Sicuani, nearly 70 victim-survivors shared their stories with the Peruvian government for the very first time.

That sunny day in late March, I asked Benedicta if she thinks that Fujimori and his ministers will finally be found legally culpable for their actions. Benedicta stared me straight in the eyes, unflinching. “Of course, how could they not be found culpable?” she asked me. “They have to be, señorita. We were completely forced.”

Rute Zúñiga was first pressured by local nurses to undergo a tubal ligation a few weeks before she gave birth to her youngest child, during a checkup at her community’s health center. It was early January 1999, and she was 29 years old. The second time was a few weeks later, on January 17, when she returned to the same health center to deliver her baby. “They would not leave me alone,” Rute told me when I met with her this past March in her home in Pampaconga, a small village in the province of Anta, about an hour away from Cusco by bus.

A few weeks later, when it was time to retrieve the official birth record of her child, Rute was too afraid to return, worried the staff would pressure her again. She decided to risk the 50 soles fine for not registering her baby, though it posed an untenable burden for her impoverished family. On the morning of February 10, Rute was preparing to travel to Cusco for the day with her oldest daughter to sell avocados at the market. As they were packing the car, they heard the sound of sirens rising up from the Limatambo valley below.

“I was immediately afraid, and I yelled ‘Go inside!’ to my daughter, hoping the ambulance would pass by,” Rute said. “We waited awhile inside and then, when I finally went outside, there were two nurses waiting for me right outside my door.”

Rute said the nurses began to interrogate her about why she had still not come down to the health center to register baby Karina. They said the baby needed a vaccine or she would infect Rute’s other children, and it would be Rute’s fault. Suddenly, Rute said, one of the nurses entered her house, grabbed her baby, and brought her to the ambulance. Running after her baby, Rute saw that there were already several women about her age sitting in the back of the vehicle. Rute climbed in to join them: they had her baby; she had no choice. About 30 minutes later, they arrived to Izcuchaca, a town in the Anta province. “When we arrived … we opened the door and inside there were so many women, men and women, so many,” said Rute. “I said, ‘Surely this is a campaign; what are they all doing here?’” Rute said she kept asking the nurse why she was in Izcuchaca if all she needed to do was register her baby and give her a vaccine—why couldn’t she do this at her local community health center in Pampaconga?—but she was told to be quiet and to take a seat.

Jacquelyn Kovarik is a freelance journalist based in Cochabamba, Bolivia. A graduate of NYU’s Center on Latin American and Caribbean Studies and the Arthur L. Carter Journalism Institute, she writes about social and political movements in Peru and Bolivia. Follow her @jm_kovarik