The Brink of Extinction in Colombia

The recent failures in the Colombian peace process further endanger Indigenous communities, which are increasingly caught in the middle of violence and displaced from their land. 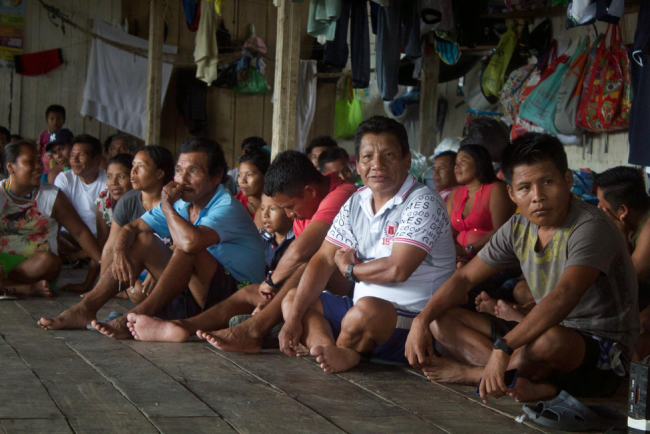 The boat ride to Pichima Quebrada—a small Wounaan Indigenous community located along the San Juan River in Colombia's Pacific region—is surrounded by lush flora, fauna, and the smell of fresh air. The Wounaan women use the werregue palm trees for traditional basket weaving and the crabs hiding in the roots of the mangroves as a source of food. They explained that the land gives them all they need and, in return, they take care of it. Earlier this summer, that all changed, when violence overtook the area.

On June 2, the Wounaan community were caught in the middle of a crossfire between FARC dissidents and the ELN, guerrilla forces that are still active in Colombia despite a peace agreement signed between the national government and the FARC in 2016. The day after this confrontation, fearing for their safety, 95 families and a total of 417 people were forced to leave their territory and seek refuge in the nearby municipality of Santa Genoveva de Docordó, located at the southern end of the Chocó department and inhabited largely by an Afro-Colombian population. They took only the clothes they were wearing.

This spike in military presence in the San Juan river basin comes as several FARC commanders defected from the 2016 peace agreement on August 29, citing the government's failure to adhere to the core components of the deal as their primary reason for abandoning the peace process. In their announcement speech, the defecting FARC commanders signaled their intentions of forming strategic alliances with other guerrilla organizations, including the ELN, which currently controls a large part of the Choco department and the San Juan river. This alliance might trigger the Colombian government to intensify its military operations in places like the San Juan, leading to more cases like Chagpien Tordo, an Indigenous reservation that was subject to bombardments by the Colombian Air Force in 2018, which injured five civilians and killed a 16-year-old girl.

After more than 100 days of being forcibly displaced from their ancestral land, the Wounaan community of Pichima Quebrada says they are ready to return home. “We must return soon in order to continue our activities that our Mother Earth grants us as Wounaan peoples. That is what we want,” said one displaced member.

However, the Colombian government has failed to guarantee of return or access to basic human rights such as security, food, and healthcare—a common occurrence for communities suffering displacement.

The presence of illegal armed actors in the San Juan River has not only put the lives of the Wounaan people at risk, but also their customs and traditional practices. The Colombian government’s failure to provide mechanisms for community protection not only risks lives, but also compounds experiences of psychological trauma and damages communities’ social fabric. These failings underscore a systematic devaluation of Indigenous and Afro-Colombian lives, which the implementation of the peace agreement has yet to address.

A History of Displacement

The Wounaan people have lived in the San Juan river basin for over 5,000 years. Roughly 9,000 people identify themselves as Wounaan, with most concentrated in the southwestern Chocó department along Colombia’s Pacific coast.

This summer was not the first time that the community of Pichima Quebrada has experienced forced displacement. In April 2016, the community was forced to flee their homes after a U.S.-made, Colombian army helicopter began firing high-caliber rounds near their village, in an alleged offensive against the ELN, forcing the displacement of 457 community members.

Pichima Quebrada sits on a strategic site for armed groups that use the San Juan River as a corridor for drug trafficking. Communities living along the river have systematically been subjected to violence and confinement over the years as various groups vie for control of the corridor. First, the river was used by the FARC, then right-wing paramilitary groups and the ELN; now, the corridor is frequented by an increase in dissident ex-FARC combatants, three years after the signing of the peace agreement.

On August 23, the Witness for Peace Solidarity Collective’s Colombia International Team was part of an international observation mission to verify the state of the three shelters in Docordó, where Wounaan families are currently living. Our team was able to observe the shelters’ utter state of decay, where the displaced community members lack proper access to food and clean drinking water.

Overcrowding in the shelters has resulted in the outbreak of infectious diseases including respiratory infections, skin rashes, and diarrhea. These illnesses  disproportionately affect young children and the elderly, and have already resulted in the death of a one-year-old child.

Many members of the community also showed signs of severe psychological trauma after members of the ELN entered their reservation and began firing thousands of rounds into the village of Pichima Quebrada, killing at least one FARC dissident. The shooting between the ELN and a number of FARC dissidents camped out near the village lasted over two hours, according to members of the community, with several bombs also being detonated, including one near the local elementary school.

The displacement has significantly disrupted the community’s traditional way of life. The art of basket weaving is a vital part of Wounaan culture, and women pass on techniques to their daughters. Since the community was forced to flee their home, women have not been able to weave. Furthermore, traditional doctors have not been able to treat members of the community as they do not have the medical plants needed. The native language of the Wounaan people, Woun Meu, has been declared at risk of extinction, putting their culture in danger. In 2009, the Colombian Constitutional Court issued a ruling on the rights of Indigenous Peoples displaced by the armed conflict. The court linked forced displacement with the extinction of entire Indigenous societies and urged the government to prevent such displacements and to pay particular attention to displaced Indigenous communities.

A Pattern of Violence

In Colombia, forced displacement disproportionately affects Indigenous people, who account for nearly six percent of total displacements since 2016, despite Indigenous people only representing 3.3 percent of Colombia’s total population. Furthermore, according to a report presented to the Inter-American Commission on Human Rights in 2018, over 65 percent of the 102 Indigenous groups in Colombia are at risk of extinction, including the Wounaan.

According to the National Victims Unit, a Colombian entity for identifying and providing reparations to victims of the armed conflict, at least 719,000 people have been expelled from their land since 2016, with at least 42,000 identifying as Indigenous. 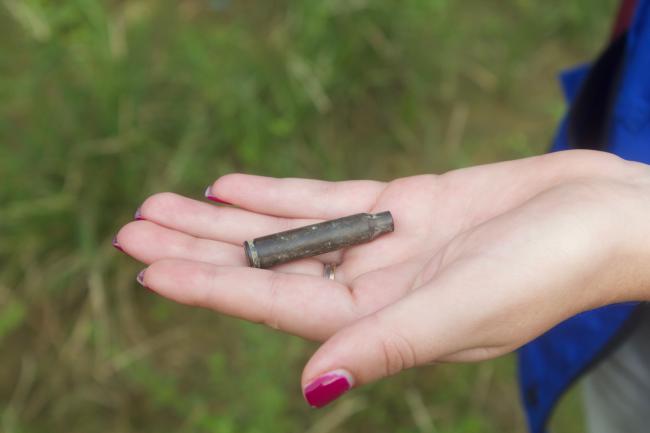 “It is important to start calling things for what they are. We are talking about an ethnocide followed by ecocide. We are talking about the cultural and physical death of entire societies,” said Santiago Mera, a human rights activist working with the Inter-Church Commission of Justice and Peace. Mera added that “the critical situation of confinement and forced displacement in Bajo Calima and the San Juan river basin, in the case of the Indigenous reservation of Pichima Quebrada, is further proof of this.”

Since the signing of the peace agreement in 2016, the U.S government has spent over $1 billion dollars on military and “anti-narcotic” assistance in Colombia, further militarizing Indigenous communities like Pichima Quebrada. As a result, its inhabitants have been subjected to harassment, arbitrary searches, and even illegal confiscations of property by the Colombian armed forces who operate in the region.

Several displaced residents of Pichima Quebrada said they witnessed members of Colombian armed forces illegally breaking into their homes and taking their property while using the village as an unofficial military encampment, all of which is prohibited under international humanitarian law.

Residents of communities along the San Juan River also reported seeing suspicious vehicles navigating the river freely despite heavily armed military checkpoints going in and out of the river.

The Fuerza de Tarea Titan (Titan Task Force)—a special military unit, which Solidarity Collective International Team members observed operating in the river—has faced serious accusations of systemic corruption by several members of the military who served in the force, including allegedly making deals with illegal miners and narco-traffickers. Furthermore, General Diego Villegas, who headed the Titan Task Force from 2016 to 2018, was involved in a number of extrajudicial killings, most recently in the case of a demobilized FARC combatant, Dimar Torres, in northeastern Colombia.

In his response to the recent escalation of violence with the FARC, far-right Colombian president Iván Duque, signaled his intent to frame the issue as one of drugs or even terrorism by labelling the insurgency as a “narco-terrorist” group allegedly backed by Venezuelan president Nicolás Maduro. This framing will allow the Colombian government to persuade U.S lawmakers to approve even greater amounts of military assistance in the context of the War on Drugs, and now, the escalating geopolitical battles against left-wing governments across Latin America. This comes after Plan Colombia, a massive, $10 billion U.S military and counter-narcotics aid package, failed to reduce coca cultivation and cocaine production, and instead resulted in widespread human rights violations including the so-called “false positives” scandal, a pervasive practice by the Colombian security forces of killing thousands of civilians and dressing them up as guerrillas to boost their numbers and obtain promotions and other financial incentives.

A breakdown in the Colombian peace agreement will only exacerbate the high rates of violence leveled against Indigenous and Afro-Colombian communities across the southwestern Pacific. A return to major military operations by the Colombian armed forces, equipped with billions in U.S military aid, could further push Colombia’s Indigenous peoples to the brink of extinction.

Evan King is a human rights accompanier with Witness for Peace, which provides physical and political accompaniment to grassroots movements advocating for justice and sustainable economies in the Americas. He is a William and Mary graduate in International Relations and Latin American Studies.

Samantha Wherry is a human rights accompanier with Witness for Peace Solidarity Collective, which provides physical and political accompaniment to grassroots movements advocating for justice and sustainable economies in the Americas. She graduated from Loyola University Chicago with a degree in International Studies and Peace Studies.