Chile's president says the COP25 host will not sign a regional treaty meant to improve access to environmental rights. 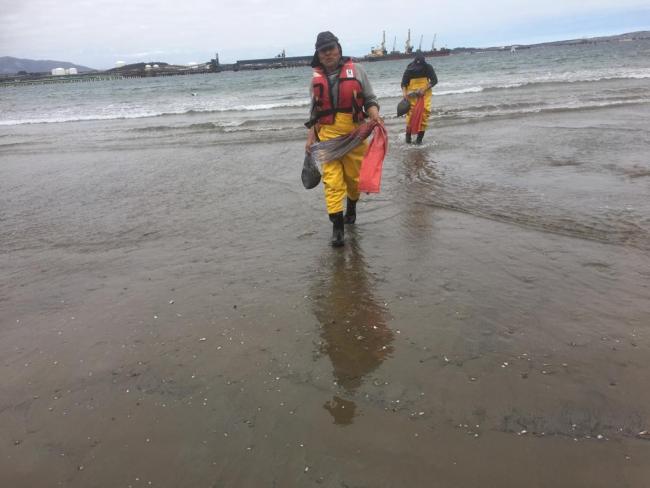 Last fall, doctors in two neighboring coastal towns in Chile treated more than a thousand patients for poisoning from poor air quality, a result of the shift from a fishing and tourism economy to an industrial hub. Quintero and Puchuncavi now belch fumes from coal-fired power plants, oil refineries, chemical manufacturers, and a copper smelter, with nearly 20 plants total.

Companies pay former fishermen to scrape coal from the beach when the tide drags it ashore, which local activist Katta Alonso said happens every few days. Activists like Alonso—who leads the group Mujeres de Zona de Sacrificio Quintero-Puchuncavi—use the word “sacrifice zone” to describe areas that bear the costs of industrialization under weak oversight. “It’s possible a country in ‘the process of development’ has sacrifice zones,” she said. In her view, the Chilean government is offering the lives of 50,000 people in exchange for industrial growth.

Environmental activists have seized on the problems of Quintero and Puchuncavi to symbolize the need for the Chilean government to sign the Escazú Agreement, which became the first regional environmental treaty when several Latin American and Caribbean countries adopted it in 2018. Shortly after coming home from this year’s United Nations General Assembly in New York, President Sebastian Piñera announced he has no plans to sign. “It adds nothing,” he told Chilean news channel Tele13. “Everything established in Escazú is already contained in national legislation.”

The new treaty traces back to 1992, when 172 countries gathered in Rio de Janeiro for the Earth Summit, a conference on sustainable development. They agreed to 27 principles known as the “Rio Declaration,” the 10th of which asserted, “Environmental issues are best handled with the participation of all concerned citizens, at the relevant level.”

20 years later, a group of Latin American and Caribbean countries announced plans to create a “regional instrument” to launch Principle 10. Their discussions culminated in the Escazú Agreement, a promise to give communities information on environmental problems that might affect them and recourse to fight injustice. The treaty also includes a commitment to protect defenders of human rights, an important, if symbolic step in Latin America, which the NGO Global Witness considers the most dangerous region for those who speak out against mining, agribusiness, logging, and other resource users. Global Witness reported 164 such killings in 2018, two of which took place in Chile. One of the activists named in the report was a member of the Indigenous Mapuche community. The other was a leader of the fisherman’s union of Quintero. Local authorities ruled his death a suicide, but his family and friends suspected foul play. Amid protests, the government charged four police officers for his murder, and Piñera asked the national police chief to step down.

Until recently, Chile championed the Escazú Agreement. It submitted plans to the UN to turn Principle 10 into a regional agreement, and led the process under the same president in office today: Piñera. The administration of successor Michelle Bachelet took over in 2014, co-chairing the negotiations alongside Costa Rica, before Piñera became president again in 2018.

More than 20 countries adopted the agreement in March 2018, and Chile initially encouraged all parties to follow through and sign the document. But by the time of the signing ceremony at UN Headquarters last September, the country had taken a different approach. The abrupt policy shift caught even Constance Nalegach—who had negotiated for Chile during the drafting of the agreement—off-guard. “I was certain that Chile was going to sign on the 27th [of September],” she said, and even a year later, “It’s difficult to understand.”

Last October 4, the foreign ministry released a statement arguing that Chile’s laws already meet the goals of the treaty and that two of the treaty’s provisions could encroach on Chilean sovereignty. One commits signatories to share information and resources with South America’s landlocked developing countries, and the other gives the International Court of Justice jurisdiction over international disputes.

But Nalegach said neither of these provisions was controversial during the talks. In fact, in August 2018, Chile signed the Minamata Convention on Mercury, which also sends conflicts to the same international judicial body. The two provisions, Nalegach said, were part of the effort to make the agreement “cooperative in spirit.”

This cooperative spirit makes the government’s hesitation baffling to Valentina Duran, a law professor at the University of Chile and an Escazú proponent. “These are obligations of every state toward its citizens,” she said. If Europe’s version of the agreement, the 1998 Aarhus Convention, is any guide, it is unlikely that this new treaty would ever put Chile’s sovereignty at risk.

“It's very difficult to imagine a conflict between two states,” Duran said. “[The convention] went into effect 20 years ago and there has never been an international conflict.”

Duran said the impetus for the overreaction was a pending case before the international court—whether Bolivia had the right to sue for access to the sea—at the point last year when 15 other countries were signing the Escazú Agreement. Bolivia, along with St. Vincent and the Grenadines, have since joined them. The court handed down the ruling in Chile’s favor last October, but until then, Duran said, “There was a lot of nervousness over what the ICJ might decide.”

Piñera echoed this concern in his recent interview with Tele13, saying, “If we sign Escazú, the conflicts that arise with Bolivia, or with Bolivian citizens, or with any other country go directly to the International Court.”

As to whether Chilean law already adequately covers the treaty’s provisions, Nagelach said, that was never the point. “The Escazú Agreement is not about legislation,” she said, “but rather full implementation” of citizen’s rights to information, participation, and justice.

Chile still has work to do in each of those areas, said Duran. The agreement sets minimum standards, and directs each country to design an implementation plan for improving its own policies. Take Chile’s environmental courts, for example. “There are many barriers, for example, the availability of legal advice for people who are affected by environmental problems,” she said. “They have no one to turn to. There are very high barriers to access that still exist in our country, and this is just one example.”

The Fight for Environmental Protections

Chile has a lengthy set of environmental laws, a constitutional protection against contamination, and even a separate court system for environmental complaints. Even so, the conditions in Quintero and Puchuncavi underscore the work the government has yet to do. Piñera said as much during the poisoning crisis last year, pledging to “not only punish those who have not complied with existing regulations, but also to improve our standards.”

The 2018 mass poisoning was the most severe of such events, but it was neither the first nor the last. Alonso said by now people are better attuned to the conditions that will put them most at risk.  “We depend on the wind,” Alonso said. “When there is no wind, and there’s coastal low pressure, especially in winter, it produces these terrifying effects. That is the most dangerous for us because it doesn’t allow the emissions to float up in the air. They come down.”

The government has since released a “decontamination plan” to improve monitoring and alerts while tightening restrictions for several chemicals. This May, the Chilean Supreme Court ruled in favor of local and civil society groups, placing responsibility on the state for what happened in Quintero and Puchuncavi. Duran, the law professor, said the case speaks to Article 5 of the Escazú Agreement, which covers “access to environmental information.”

“The rebuke [the court] made was for not providing enough information on the origin of the emissions, which gases were there, who emitted them, what risk do they carry, and what are the plans for the people exposed and the kids and adolescents,” Duran said.

The new treaty will not even go into effect until 11 countries out of the 33 that make up the region have passed laws ratifying it. Before the UN General Assembly, only one country, Guyana, officially ratified, but the agreement is now halfway to force. Granada, Jamaica, Nicaragua, and St. Kitts and Nevis signed, and Bolivia, Uruguay, Jamaica, St. Vincent and the Grenadines, and St. Kitts and Nevis ratified on September 26 in New York. The Chilean Ministry of the Environment said in an email that the Foreign Ministry is still “analyzing the possible implications and scenarios that its subscription could mean for the country considering its interaction with other treaties.”

“On the other hand,” the environment ministry spokesperson wrote, “it is worth remembering that the signing of said document will be open until September 26 of the year 2020.”

There is no deadline for the treaty to reach 11 ratifications. Once it takes effect, Chile will be able to join through a different legal process.

Nalegach said that last year she would have bet on Chile’s signature.

“It seems coherent to me with the leadership,” Nalegach said. “It is coherent with being the host of COP25”— the Santiago Climate Change Conference scheduled for this December— “and even more so because the president has said he hopes this climate change meeting is a place for the citizenry.”

Leaders, scientists, and activists will gather in Santiago to talk all things climate change, as its effects creep into daily life right nearby.

Alanna Elder is pursuing a master’s in journalism and Latin American and Caribbean Studies and studying Quechua at NYU. She has experience in general assignment reporting for public radio in Alaska and Wyoming. She is currently the deputy editor at Latin America News Dispatch and a producer of RadioLAND.
Tags:
Chile
climate change
Escazú Agreement
Mapuche
United Nations
Tweet