Ecuadorian Indigenous communities organized food, shelter, and domestic chores with the help of local volunteers, and proved the people’s power. But the anti-austerity fight might not be over. 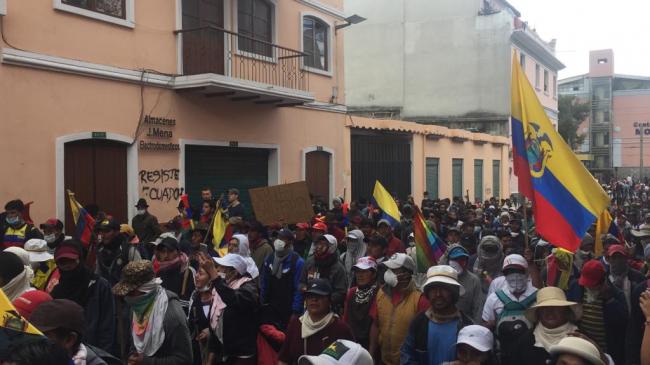 After 12 days of nationwide unrest, several Indigenous peoples of Ecuador joined by social organizations succeeded in forcing the government of Lenin Moreno into scrapping a presidential decree eliminating fuel subsidies in the oil-producing nation.

The uprising saw thousands of indigenous people marching towards the capital Quito from different corners of the country. They occupied the city and received unprecedented solidarity from local volunteers and progressive universities, while protesters vigorously clashed with security forces for days around the presidential palace and National Assembly.

“You can call it a war zone. It is ugly, ugly, ugly,” said Margarita, a member of the rescue brigade of the Eugenio Espejo hospital in the Ecuadorian capital Quito, attempting to catch her breath. She had just returned to a health care post a few hundred meters away from the frontlines of the clashes between security forces and anti-government protesters.

Her comments came minutes after Ecuador’s president Lenín Moreno decreed a total curfew in the capital and the deployment of the armed forces. The government made the announcement just 45 minutes before the curfew went into effect at 3:00 p.m. local time on Saturday, October 12, a day before the government held talks with Indigenous leaders that ultimately concluded with Moreno agreeing to revoke the decree that sparked the protests.

The unrest in Ecuador started on October 3, when the government announced a set of economic measures known in Latin America as the paquetazo, including the presidential decree 883, which ordered the immediate elimination of decades-old fuel subsidies. The economic package fell in line with recommendations by the International Monetary Fund (IMF) as part conditions of a $4.2 billion in loan agreement struck with Moreno’s government in 2018.

Transport workers launched a nationwide strike before several Indigenous movements joined them, marching to the capital in support of the strike and in rejection of the reforms.

Only a few hours after protest started, Moreno decreed a state of emergency, which suspended civil rights and allowed for military deployment to police the protests.

Two days later, the transport workers lifted their strike after the government agreed to increase public transport prices. However, the Indigenous movements and smaller social organizations around the country vowed to continue their protests.

Realizing his deal with the transport workers’ representatives failed to stop the demonstrations, Moreno issued an executive order that transferred the seat of the government from the capital Quito to the port city of Guayaquil and established a nighttime curfew around strategic state buildings on October 8.

At least seven people were killed in the protests, according to Ecuador’s Ombudsman office, while hundreds were injured nationwide, and reports put the number of those detained at more than 1,000.

Amid smoke from tear gas and fires lit up by the protesters, Margarita told us security forces have allowed her and first responders to attend to wounded protesters and police officers.

“On both sides, they are letting us attend to the wounded. They are still humanitarian in that sense,” she said, adding that protesters have been supporting first responders, giving them safe passage, and “protecting” them. “The same also goes for the police. See, so far I have not run into one who would hit me with pellet bullets.”

First responders’ brigades also worked with nurses, doctors, and students from medicine schools in the city to help injured protesters. The volunteer medics were “giving all the support they can” Margarita said.

The medics set up various posts around the site of the protests and roamed the streets wearing white coats and holding white flags to avoid being targeted by the security forces. We approached multiple volunteers for comments, but they declined to answer as only first responders’ brigades were authorized to speak to the media.

Since they started arriving in Quito on October 7, Indigenous communities have occupied the capital’s cultural center known as La Casa de la Cultura and the park adjacent to it, just 900 meters away from the National Assembly. The biggest Indigenous organization in the country, Confederation of Indigenous Nationalities of Ecuador (Conaie), along with other Indigenous organizations, convened assemblies there to make decisions on their demands and next steps, while also planning their marches towards different government buildings.

Away from home and traveling as families and communities with children and elderly people, the thousands of Indigenous protesters organized food, shelter, and medical supplies in and around the cultural center and the park with the help of volunteers and donations from individuals and groups around the city.

“We are receiving the love, support, solidarity of the people of Quito and different provinces of the country who are arriving with medical supplies, with toilet supplies, with water, drinking water,” said a woman volunteering at a donation post as people formed human chains to carry supplies of food, clothes, and mattresses. “We are here with all our heart, with all our feelings of solidarity.” 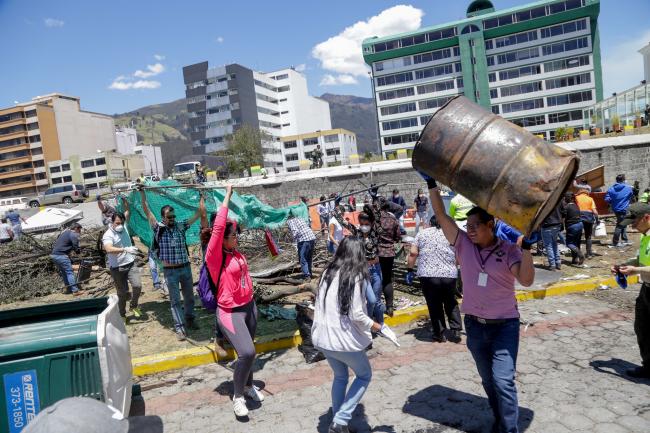 She explained that people from all Indigenous communities had set up kitchens in order to provide food “for everyone, both on the battlefront, and in the surroundings.”

Meanwhile, students, professional caregivers, and retirees gathered at universities in the capital to look after children, mothers with babies, and elderly people in need of care.

Most participating in the demonstrations spend the night in the cultural center and shelters in several universities in the city such as Universidad Catolica, Universidad Salesiana, and the country’s largest public university, the Universidad Central.

Others have been welcomed into people’s homes in working class neighborhoods such as La Vicentina, where locals provide “spaces for men and women of all ages to spend the night.” The volunteer believes that such “solidarity keeps the Indigenous people in the fight.”

At another entrance of the cultural center, Alicia, 30, was among other volunteers handing over baking soda-soaked cloths, made of torn up pieces of donated clothes, to protesters, so they could brave the tear gas being fired by police just a few hundred meters away.

“I came here today—I left my son at home with my mother—to stand in solidarity with our Indigenous brothers,” Alicia said, adding that she had come with her dad to drop off some donations and ended up staying to help.

In a country that has seen very little unrest on a significant scale for the last 12 years, the deaths of seven people in less than 10 days is anything but normal. Alicia said she and many of the volunteers directly blame the Ecuadorian government for the ongoing violence. “We are Ecuadorian people; we are all united in this,” she said. “And many of us are outraged by so many deaths for so much violence, that it is by the state, by the national police, and the military.”

Nevertheless, she argued that members of the police and military are also people who “have parents that are Indigenous, who come from different communities around the country,” and she hoped they would not turn against their own people despite their uniforms and weapons.

During clashes days earlier, protesters were seen throwing water bottles and bags of bread to the police for sustenance, shouting: “This is how your people treat you. Remember it!”

As protests paralyzed the country, police deployed tear gas, rubber bullets, and water cannons, while sealing off the areas surrounding the presidential palace as demonstrators attempted to reach it. Protesters also briefly occupied the National Assembly on October 8, before security forces removed them.

Most local media outlets were critical of the protests, while the government and its supporters called demonstrators “zanganos,” or lazy, arguing that such mobilizations hinder people’s ability to go to work.

“We are all Ecuadorians. They [the Indigenous people] are our brothers,” Alicia said in response to such arguments. “Thanks to them we have food on our table. They work from dusk to dawn in the field to be able to produce food and bring it to big cities. Without them, big cities are nothing. They are our workforce, not the big companies.”

The unrest came to an end Sunday when the government and Indigenous leaders from nations across the country reached an agreement as a result of United Nations-mediated talks. The talks, broadcasted live across the country,  delved into some heated exchanges between the two sides, before negotiators went into an hours-long recess away from the cameras where they forged the deal.

In a victory for the popular uprising, President Moreno agreed to revoke his incendiary decree 883 eliminating the fuel subsidies. Indigenous leaders agreed to be part of a commission that would come up with a new decree mandating budget cuts in other areas to fulfill IMF obligations imposing austerity measures.

On Monday morning, the government lifted the state of emergency and the curfew in Quito. In an act of final solidarity and street organization, Indigenous people, along with volunteers and police officers, worked to clean streets and remove roadblocks. Moreno officially revoked the decree later that day.

While many celebrated the Moreno decision as a people’s victory against the IMF, mainstream media and even some progressive outlets outside the country falsely reported that the Ecuadorian government had done away with all austerity measures, with some going as far as saying the deal with the IMF had been dropped altogether.

However, most of the austerity measures in the new economic package, such as reducing vacation time for public sector from 30 days to 15 days, and reducing salaries and labor protections for public and private employees, remain untouched.

The executive now must send those IMF-suggested reforms to the National Assembly for approval. Some also remain on edge recalling that the government had previously said a second economic package would be introduced after the first one was approved.

Some would even argue that the scrapping of the decree was not a real win as the government has made it clear that a new presidential decree concerning the subsides would have to be agreed on as part of the newly created national commission. The United Nations said the new commission was due to meet this week for the first time.

Meanwhile, the country’s Indigenous movements, credited with toppling governments in decades past but notably less powerful and organized in recent years, seems to be refinding its stride and will likely be further empowered by the recent win, even if it was a partial one.

Mohammed Hamarsha is a journalist working for teleSUR English. Cloe Perol is a linguist and freelancer. Both are based in Quito, Ecuador.