The Reality in Chile

As protests continue in Chile over systemic inequality, the government is resorting to tactics not seen since the dictatorship. 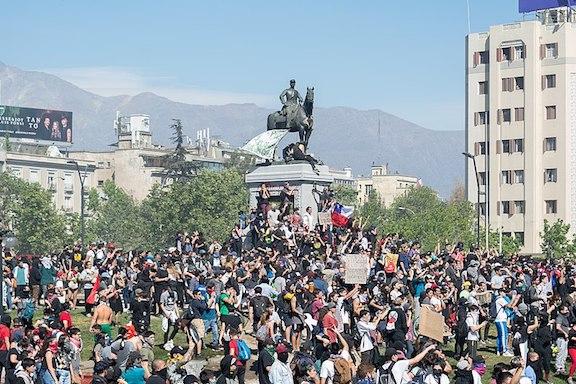 Last Friday night, in response to widespread protests, tanks rolled down the streets of Santiago, Chile, a country that is widely described as the strongest democracy and most developed economy in Latin America. Even for Chileans paying attention to decades of protests, the broad national eruption of the people’s dissatisfaction was unexpected.

The conflict started in Santiago earlier last week with peaceful protests in metro stations against an increase in transportation fares. For a person making minimum wage, a week’s worth of transportation to and from work and necessary travel on the weekend would cost about 21 percent of their salary.

But the protests are not just about the rise in fares, which has been called the “drop that overflowed the cup.” The added expense to an already impossible cost of living pushed citizens’ frustration over the edge. Workers, students, feminists, anti-fascists, and Indigenous activists, among others, have spent decades fighting for justice. The protests are about extreme inequality, inefficient and unjust healthcare systems, increased electricity prices, privatized water, assassinations of environmental, workers' rights and Indigenous activists, unequal education, and a privatized failing pension system left over from the dictatorship—most retired teachers are receiving less than $300 a month causing many to continue working into their 80s.

At Santiago’s Estación Central metro station, a woman was shot with a pellet gun and was hospitalized with serious injuries, leading to an angrier and more energized response from protesters. Protesters began setting fire to metro stations, increasingly frustrated with the state for not hearing their concerns or opening dialogue.

As protests continued on Friday night, President Sebastian Piñera, who has been accused of dodging millions of dollars in taxes over 30 years, called a state of emergency, sending the military to the streets of Santiago.

For Chileans, seeing the military in the streets draws eerie parallels to the 1973 coup, which led to a 17-year dictatorship under which tens of thousands were killed, disappeared, and tortured.

"How come when you want to protect the citizens, you send to the streets the same institution that never told us where they threw the bodies?” tweeted Chilean author Daniel Villalobos on Friday.

Additionally, the general that Piñera put in charge of the state of emergency is the son of a general who, during the dictatorship, was responsible for torturing thousands in Colonia Dignidad, a torture center linked to Nazis.

This response solved nothing, and violence escalated. On Saturday, the state of emergency spread to other major cities, and Piñera announced a curfew starting at 10 PM. This is the first curfew in Chile since the dictatorship ended nearly three decades ago.

For many, the curfew and military presence are not the only reminders of the dictatorship. The violence and human rights violations have reached shocking levels, exceeding that of all conflicts since the end of the dictatorship. The police and the military have been documented beating children, running over protesters, shooting to kill with live ammunition, dropping teargas canisters from helicopters, entering people's homes, and starting fires to worsen the protest’s image.

Police and military, dressed as civilians and without identification, have arrested individuals without reason and forced them into private cars, sometimes in trunks. Some state forces even forced protesters to do jumping-jacks and pushups to avoid being beaten. Military forces were also documented forcing captives and accused looters to strip naked in the streets before being beaten. On Wednesday, Chile’s National Human Rights Institute began investigating the use of metro station Baquedano as a center for torture. Blood and ropes were found on the scene.

Pundits, local politicians, and citizens have criticized Piñera for not opening dialogue. The president, whose term is until 2022, has opted instead to declare martial law and further polarize the country by stating “we are at war.” He has branded the  protesters “a powerful enemy [...] that is willing to use violence and delinquency without any limits.”

Buildings are on fire, tanks are in the streets, water is shut off in neighborhoods across the country, streets are barricaded, and most of Santiago’s metro remains closed with only sections of one out of six lines running. A common sentiment has been that Chile and its people “awoke,” as more protesters of all social classes joined the movement to show Piñera they are not at war. Starting Friday night, sounds of “cacerolazos”—a traditional Pinochet-era form of protest that involves drumming pots and pans from the safety of one’s home to avoid repression in the streets—rang throughout Santiago.

As the country continues towards an increasingly uncertain future, the people of Chile are calling for reform, a social revolution, and an end to the Piñera regime.

Andrew Conca-Cheng is a graduate from American University where he studied International Studies and Spanish with a focus on Human Rights and Development in Latin America. He previously lived in Santiago, Chile where he interned for Casa de la Paz, taught English in a public school in Cerro Navia, and worked on a photography project documenting feminist student protest. He is also a former intern at Washington Office on Latin America (WOLA). Andrew is currently working on youth development and empowerment in Central America.