Fire and Fury in the Chilean “Oasis”

Chile's new generations have become politicized in fragmented protests, marked by cathartic moments of social explosion and the collapse of some pillars that were supposed to be unmovable. The protests sparked by metro fare hikes are the latest chapter exploring the limits of what's possible. 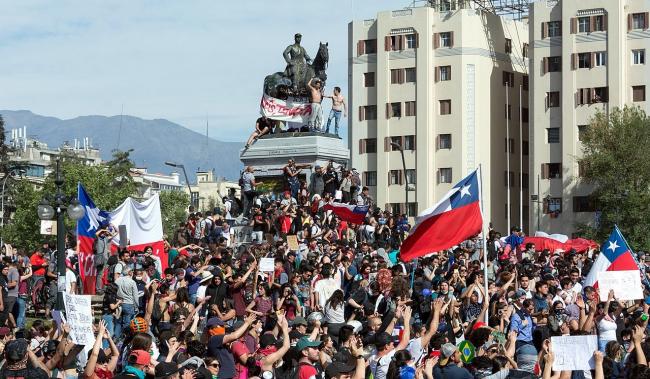 A fare hike was the spark that helped unleash a massive wave of civil disobedience. But the momentum of the protests shows how some tectonic plates representing the transition and codified in a Constitution passed during the era of the dictatorship are shifting. New generations have become politicized, and some pillars, previously thought unmovable, have been knocked down.

On Monday, October 7, a group of middle school students organized a massive fare evasion at the Santiago metro in protest of the price increase. It wasn’t the first time this kind of protest was organized ahead of an increase in the cost of public transportation. The government responded as it has to past protests. President Sebastián Piñera characterized them as an act of vandalism, and when addressing the actual issue at hand, he limited his response to the fact that a panel of experts recommended the fare increase due to higher energy costs and a change in the value of the dollar. Five days later, the fare evasion and wave of protests went beyond public transportation, and resulted in the burning and looting of various establishments, including the corporate offices of one of the main energy companies in Chile. The government declared a state of emergency and deployed soldiers to patrol the streets of the city and repress the uprising. They even imposed a strict curfew, which hasn’t happened in Santiago since the military dictatorship.

What happened over the course of five days to account for an uprising, a widespread fury unprecedented in contemporary Chilean history?

Santiago has one of the most expensive public transportation systems in the world. On the other hand, while in real terms the price has remained relatively stable since 2015, this stability came after an increase (on top of inflation) of 40 percent between 2010 and 2015. This small example shows how the economic and social model in Chile allowed it to become one of the richest countries—and most unequal—in Latin America. Chile is often held up as a model because of its macroeconomic and institutional stability, its free economy, and its targeted social spending. In fact, Piñera recently declared Chile an “oasis within the chaos of Latin America,” even comparing himself to Odysseus as the mass protests gained strength. Just as the heroic literary character stuffed his ears with wax to not listen to the song of the sirens and avoid falling into their trap, Piñera avoids listening to the siren song of the people.

Indeed, to understand the nature of the mobilizations, you have to start with the mechanism that determines the price of public transport and the way it supposedly avoids falling under the siren’s spell. A panel of experts decides the cost of public transportation using a series of economic variables. It’s an institution designed to keep itself apart from politics and to regulate itself according to the market. From this perspective, remarks made by the panel’s president seem understandable. Cornered by protests that had finally reached the capital, he responded, “When they raise the prices of tomatoes, bread, basically anything, they don’t protest.” The cost of transportation obeys the inevitable market forces, which technocrats follow indifferently, far removed from the political sphere. You may or may not like it, but like the law of gravity, these adjustments are inescapable.

In this way, public policy stops being policy and it stops being public. The issue of pensions includes not having a budget for public pensions, which requires an adjustment to pension rates, and an aging population, which requires a change in the retirement age. The problem of education is a problem of “competition among private bidders,” which requires more adequate subsidies, etc. Jaime Guzmán, one of the intellectual authors of the Chilean constitution enacted under the dictatorship, describes the situation like this: “There was a need to assure that if the progressives ever came to power, they would be forced to maintain the status quo so that—and it’s worth the metaphor—the limits imposed by the playing field would reach a point where it would be incredibly difficult for others on the field to oppose them.” The most natural thing for a changing society is for the social contract to change, but that’s exactly what the Chilean establishment has sought to avoid.

As a result, social movements continue to go beyond the political sphere, rousing from the political stupor of indifference. In Chile, contrary to how things appear, there is a tense and delicate balance that keeps various public policies in effect. They are sustained through the belief in an entrenched bureaucracy and a strong dose of inertia. When this fails, repression is the last recourse left to preserve institutions. Almost every social conflict that Chile has lived through since the end of the dictatorship follows the same pattern. When an affected group protests a public policy, the policy is protected by an entrenched bureaucracy or market logic. Nevertheless, when these movements reach critical mass, they wind up revealing the social and political consensus concealed behind a wall of technical and private obstruction.

In the case of the protests that arose in response to the fare hike, the government initially claimed it was impossible to undo the measure. About 48 hours later, when the erupting protests gained strength, the president contradicted his Odysseus allegory when announcing that he had heard the “voice of his fellow countrymen” and that he would suspend the increases. Today, the government subsidizes approximately half of each fare. In other words, behind an entrenched, in theory, depoliticized bureaucracy, there is a deeply political answer: why is the government subsidizing half rather than one-quarter, or three-quarters? Becoming aware of this arrangement resulted in a week of social upheaval. Furthermore, the sloppy and slow response is noteworthy if we consider that Piñera has faced another important social movement during his first term in office: the one led by college students. In that case, he followed the same script and was forced to back down three times from what the government had declared “possible.”

Through social movements, politics end up sneaking through the cracks of these iron rules. Yet, it is a particular type of politics. The new generations have become politicized in fragmented protests, marked by cathartic moments of social explosion and the collapse of some pillars that were supposed to be unmovable. In addition to various student movements, feminist tides and the fight against the private pension system are signs of tectonic shifts in the Chilean transition. They also show the increasing prominence of the so-called “emerging middle classes.” Formed in the framework of radical neoliberalism of the 1990s and 2000s, they perceive the vulnerability of their position; devoid of a social security cushion and forced to go to the private market to access public services (such as education, healthcare, pensions, etc.)  In addition, the effective process of de-politicization and dismantling of the social fabric has brought the need for non-traditional forms of organization: few are unionized, let alone active in political parties.

Social movements have made it possible to discuss these issues in politics once again. At the same time, these movements have made the relations of political representation rattle. Even the new Chilean Left, direct heirs of the 2011 mobilization and embodied in the Frente Amplio, have found themselves to be spectators, alongside political representatives, of the current mobilizations. The recent outbreak has no known brain nor leadership. When the government could not frame mass fare evasions within the scope of ​​petty crime, since according to surveys, evasions enjoyed a majority of support from the population, it tried to position them in the sphere of national security and as a defense against organized “obscure” groups that are manipulating the population. Government supporters tried to attribute the outbreak to leftist scheming: the Communist Party and Frente Amplio. The truth is that this outbreak, more than having the support of the leftist forces, took place completely outside the traditional spaces of political representation and social organization. Very young people could be seen—with a strong presence of women—in the mobilizations.

This is a leaderless movement, which is hard to find in the recent history of social movements. While these contain strong components of horizontality, they are consolidated around traditional social organizations, such as unions in the case of the movement against pension fund managers (AFP) or student organizations in the case of education and feminist movements. Perhaps the closest antecedent are the autonomist resistance movements against the dictatorship of Augusto Pinochet. They organized their revolts in the form of a network which included students, residents, and workers, with little space for the vanguard and part structures. It is possible that this characteristic explains why, until now, the term that has dominated the debate in the political sphere is “bewilderment.”

It is said that in 2014, at the end of his first government, outgoing ministers gave Piñera Charles Tilly’s book Social Movements 1768-2004. Ironically, the biggest defeat of his first term was the inability to deal with the 2011 student mobilizations. For many, this explains why the first right-wing government since the end of the dictatorship could not hand over the power to someone like-minded and ended up giving the presidential sash to a center-left coalition.

For now, Piñera has shown that his government, normally skilled in managing communications and controlling the political agenda, is completely unable to meet the demands of the social movement. However, more than governmental mistakes, this social outbreak reveals an increasing incongruity between social demands and their political translation. It is possible that protests fade out with the same speed that they emerged; yet, the next time the subway fare is discussed, it will be very difficult to deny that it is a profoundly political discussion. More importantly, the damage to Piñera's success story seems fatal. In the coming days, Donald Trump’s team is preparing for his arrival to the Asia-Pacific Economic Cooperation (APEC) summit meetings [editor's note: Piñera since cancelled the APEC summit], which will be held in Santiago in a few weeks. The country the U.S. president will find is far from the “oasis” that Piñera wanted to display.

This article was originally published in Spanish by Nueva Sociedad.

Noam Titelman is an economist and doctoral candidate at the London School of Economics and Political Science. He was president of the Students’ Federation at the Pontificia Universidad Católica de Chile (PUC) and currently is a member of the Revolución Democrática.