As the Right seeks to fill the power void in Bolivia, polarization is sparking often racialized violence. 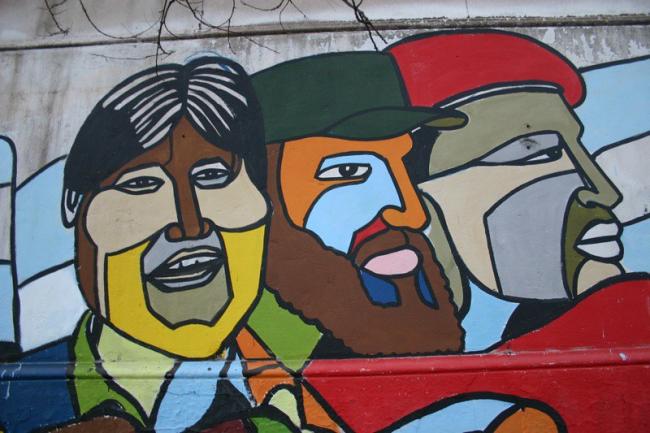 It took two days after Evo Morales’s abrupt resignation on November 10 for a new president to take the reins of Bolivia. Conservative opposition leader and second vice president of the Senate, Jeanine Añez, appointed herself to the position in the presence of only a handful of opposition lawmakers. Representatives of Morales’s MAS party boycotted the session, withholding the quorum necessary to officially accept Morales’s resignation and approve the interim president. But the country’s constitutional court gave her the go-ahead to become the caretaker president.

Añez was next in line for the presidency after Morales’s vice president, and the heads of both chambers of Congress resigned in the face of threats of violence against top MAS officials unless they left office. Anti-MAS protestors burned the houses of several MAS ministers, including the home of the now-resigned head of the Chamber of Deputies, Victor Borda.

While Añez immediately committed to holding new elections within 90 days, this was insufficient to calm the country or grant her legitimacy. She also swiftly vowed to govern with the Bible at hand and recognized Juan Guaidó as the president of Venezuela, both sharp pivots on MAS policy. On the afternoon of November 14, police and military blocked MAS legislators—including senate chief Adriana Salvatierra, who announced her decision to step down in a November 10 television interview—from entering Congress, where MAS holds a two-thirds majority.

The debate about whether Morales’s sudden resignation restored democracy or marked a coup is complicated by the extremely polarized nature of Bolivian politics. Morales’s failure to respect the Constitution, including seeking Supreme Court backing to override the 2016 referendum that ruled out his reelection, put the 2019 election on tense footing. This, combined with suspected electoral fraud, generated vociferous popular protest. While the post-election demonstrations in the three weeks leading up to Morales’s resignation had roots largely in the middle class, they also involved an emergent middle class whose fortunes had significantly improved under Morales’s government programs, but whose expectations had also changed.

This movement and its centrist leader, second-place presidential candidate Carlos Mesa, saw itself sidelined by a right wing with little respect for the rules of democratic transition. The more radical Right effectively swayed the police to its side with promises of improved compensation.

By the night of November 13, La Paz and Cochabamba city center streets were empty of anyone but the police, military, and self-appointed neighborhood militias. Many shops and businesses were boarded up and protesters had erected barricades fashioned from tires, furniture, and barbed wire.

Morales left office on the heels of dramatic but localized mutinies by several police units across the country two days earlier. The police announced after three weeks of containing demonstrations that they were no longer willing to actively repress protestors. Two days later, on November 10, the Organization of American States (OAS) issued a preliminary report finding that “irregularities were detected, ranging from very serious to indicative of something wrong” in the October 20 election. Authorities have since detained the former president and vice president of the electoral commission known as the TSE to face investigation. Although the Morales government accepted the OAS audit as binding, questions have been raised about the organization's impartiality and accuracy.

Although shortly after the OAS announcement Morales pledged to hold new elections, Armed Forces commander Williams Kaliman suggested that he step down to diffuse the crisis. Although other groups had also called for Morales’s resignation, the military’s abandonment of the MAS government proved the breaking point that forced Morales to leave.

In his resignation speech after 14 years in office, Morales emphasized that he was leaving to pacify the country. "I don’t want to see any more mistreated families,” he said, condemning attacks against people in his party, including his sister Esther, whose house was burned down. He described what had happened a civic-political-police coup. “Being an Indian and being a left-wing anti-imperialist is my sin,” he said.

Both opposition leader Carlos Mesa, who came in second after Morales in the contested elections, and the OAS had called earlier in the day for an orderly transition with Morales finishing out his current term, which ends on January 21, 2020. But center stage in Bolivia’s conflict has increasingly been seized by the rightwing civic leader from the eastern city of Santa Cruz, Luis Fernando Camacho, who insisted that Morales should step down at once.

In a highly theatrical move last week, Camacho announced that he would fly to La Paz and hand Morales a letter in person demanding his immediate resignation. When Mesa urged him to wait for the results of the OAS audit, he broke with the opposition leader, saying that Mesa didn’t really care about respecting the Bolivian people’s vote.

By the end of the week, Camacho had largely eclipsed Mesa. Gangs began to intimidate the MAS leadership into resigning. “They took their relatives hostage and threatened to burn down their houses, if they didn’t resign,” said a MAS lawmaker who requested anonymity for fear of retaliation. The Minister of Mines, the governor of Oruro, the mayor of Vinto, and the head of the Chamber of Deputies all suffered this kind of violence.

Meanwhile, the Director of Radio for the CSUTCB, the main peasants’ union and ally to Morales, was tied to a tree while protestors ransacked the local headquarters.

On November 11, Mexico offered Morales and his vice president Álvaro García Linera asylum and they flew to Mexico. About 20 top members of the MAS government are currently taking refuge in the Mexican embassy in La Paz.

Opposition supporters poured into the streets Sunday afternoon to celebrate what Carlos Mesa heralded as the “end of tyranny.” Camacho went to the now-empty Presidential Palace with Marco Pumari, a civic leader from Potosí, and laid his letter demanding Evo’s resignation beside a bible and a Bolivian flag. A pastor accompanying them announced, “Never again will Pachamama [Indigenous Mother Earth] return to the Presidential palace.”

Roots of the Crisis

The origins of Bolivia’s current constitutional crisis stem from a 2016 referendum that Morales called to seek a mandate to modify the 2009 Constitution to allow him to run for another term. After he narrowly lost, he promised to respect the results. A year and half later, in a bizarre twist of legal maneuvering, the country’s courts declared that not permitting him to run would violate his human rights. They also abolished term limits for all elected government posts.

“He could have gone out a hero and Bolivia’s best president on record,” said Hector Garcia, a Cochabamba teacher. “Instead he couldn’t let go of power, and his party wasn’t able to force him to either.” The MAS clearly misread the build-up of resentment towards Morales running again, coupled by predictable voter fatigue after 14 years in office. “It would be nice to have someone new,” Ivon Flores, a La Paz street vendor, said wistfully.

Half of Bolivia’s population is under 25, with a quarter of the population voting for the first time in this election. Most have never known any president other than Morales.

Concrete evidence of foreign intervention in the Bolivian election is scant, although the U.S. National Endowment for Democracy did fund opposition organizations committed to “promoting democracy.” NED funding in 2018 for Bolivian civil society groups it described as working to “prevent democratic backsliding and the president’s consolidation of power” totaled nearly $1 million. President Trump announced on November 11, "The resignation yesterday of Bolivian President Evo Morales is a significant moment for democracy in the Western Hemisphere.”

The opposition led by Carlos Mesa effectively convinced much of the public that the elections would be fraudulent months before the electoral process began. They maintained this position even when the initial vote count showed Mesa close enough to Morales to require a runoff election.

However, the provisional vote count suddenly stopped for almost 24 hours. When it restarted Morales had a decisive lead, which quickly spread suspicions of fraud beyond the core of the opposition. The perception of fraud became so entrenched that whether or not it had actually occurred became secondary.

According to political scientist Fernando Mayorga, the crisis reflects “the ethno-racial cleavages that we have never managed to heal” in Bolivia. Racial slurs against the approximately 60 percent of Bolivians who are Indigenous, have become increasingly common since the elections. The message “Evo take a bath please” was scrawled across a wall in an affluent section of central La Paz. Footage circulated on social media showing protesters burning the wiphala, the Andean Indigenous flag which Morales had declared a national symbol in tandem with enshrining plurinationalism in the constitution. Videos of police tearing off the wiphala on their uniforms also exacerbated fears of a state backlash against both the MAS and Indigenous peoples.

After Evo’s plane left, his supporters’ anger spilled out into the streets across the country. Pro-Morales protestors in La Paz demanded the immediate departure of Camacho from the city and respect for the wiphala. Incidents of looting and burning attributed to both MAS supporters and common vandals were reported in La Paz and Cochabamba.

As Camacho and his allies jockeyed to fill the power void, polarization sparked violence in the streets. The police remained sequestered in their barracks until they forced their MAS-appointed commander to leave on November 11. They then called on their historic enemies, the armed forces, for back up to quell the MAS protestors. Their aggressiveness towards MAS demonstrators stood in marked contrast to the restraint they showed during opposition protests the prior three weeks. At the same time, impromptu vigilante groups formed in wealthier neighborhoods. “The MAS is going invade our neighborhoods,” said Pedro Salazar in the central La Paz neighborhood of Sopocachi.

Meanwhile, MAS supporters have promised more marches, some have blockaded roads across the country, and the country’s principal peasant organization announced a siege of the capital city La Paz.

“We had peace for 14 years with Evo,” said Juana Padilla at a pro-Morales demonstration. “We had new schools and hospitals, we had stipends for our children, our elderly, for pregnant women. We don’t want these racists to take all that away from us.”

Linda Farthing is a journalist and researcher who writes for the Guardian, Al Jazeera, Americas Quarterly. She has co-authored  three books on Bolivia.

Olivia Arigho-Stiles is a PhD candidate at the University of Essex researching Indigenous mobilization in twentieth century Bolivia. She is a contributing editor at Alborada magazine.