Debate continues to swirl around the questions of what led up to Morales's resignation and what has happened since. 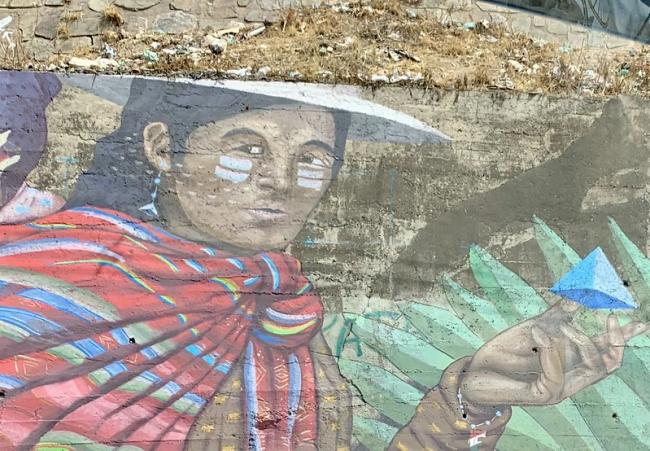 If there was any doubt before, the horrifying events of the past week in Bolivia should have laid those doubts to rest: It was a coup. But there should have been no doubt to begin with. While it is true that the events preceding Morales’s ouster were complex and multifaceted, there is no disputing that the military demanded Morales step down. The fact that the military head used the word “suggest” is irrelevant. When the military “suggests” a president step down, and he or she does immediately after, that is a coup. As Bernie Sanders said when asked about this issue, “[A]t the end of the day it was the military who intervened…and asked [Morales] to leave. When the military intervenes…that’s called a ‘coup.’”

The most immediately relevant time period to understand events preceding Morales’s resignation is from 2016 to the present. Focusing on this period helps with understanding the virulent opposition Morales faced in the weeks before he was forced out. Urban middle classes initially led these protests, with far-right upper-class forces subsequently seizing control and directing them. This opposition focused on two charges. The first is that Morales should not have run in the 2019 election, because Bolivia’s constitution permits re-election only once, and because Morales—narrowly—lost a 2016 referendum on indefinite presidential election. It is worth pointing out—as NACLA did at the time—that the run-up to this referendum involved what Morales supporters felt to be a “dirty war” against him, with some justification. In the weeks before the referendum, conservative media played up a scandal involving a “love child” of Morales, with subsequent reporting suggesting the child died shortly after birth or never existed. It is likely that this campaign had some effect on the referendum result, which Morales lost by only a few percentage points.

A 2017 electoral court decision overturned the referendum result, which allowed Morales to run this year, but also generated widespread dissent, particularly from urban middle classes. This combined with the second charge—that Morales stole the October 20 election—and resulted in large protests against Morales in the weeks after the election. The Organization of American States led the charge of fraud. After weeks of questioning the official results that gave Morales a first-round victory, on November 10 the OAS issued a report stating that it could not certify the results of the vote as accurate. A report by the Center for Economic and Policy Research makes a convincing case that the OAS acted in a biased manner and failed to present evidence of actual fraud. This means that Evo Morales won the October 20 election in the first round. Irrespective of any valid criticisms one can make of the MAS or Morales, this fact is crucial to remember.

Many Bolivians, however, were convinced there was fraud, and took to the streets, first to demand the annulment of the election, and then for Morales to resign. Luis Fernando Camacho, a conservative businessman and leader of Santa Cruz Civic Committee, led the call for Morales’s resignation. By eclipsing the centrist Carlos Mesa, who finished second in the October 20 election, Camacho also pushed the protests to the Right. All this lies behind the final events that led to Morales’s downfall: Police mutinies on November 8-9 and the military’s November 10 “suggestion” that Morales resign, which he quickly did.

A longer-term perspective on Morales’s downfall would also take account of the decomposition of popular movements that took place in the wake of the 2011 TIPNIS conflict, which pitted Morales and the MAS against Indigenous and other movements opposed to the building of a road through the TIPNIS national park. This conflict had two important long-term consequences. The first was the growth of vociferous opposition to Morales and the MAS from some on the Left, with Morales’s former UN Ambassador Pablo Solón among the most high-profile leftists to publicly split with Morales over TIPNIS, and in particular over state repression of Indigenous-led protests that resulted in the deaths of protesters. The second, equally significant, effect of the TIPNIS conflict was the splits among and even within popular-sector organizations that had previously been aligned with the government. MAS played a key, and very disturbing, role in dividing organizations that opposed Morales over TIPNIS. This led to a weakening of popular-class organizational and mobilizational capacity, a factor some analysts suggest explains the relative slowness with which some social movements came to Morales’ defense after the November 10 coup.

This doesn’t mean the events were not a coup. The critical fact is that the military forced Morales to step down. The implications of this fact are not incidental, but fundamental, to the horror now unfolding in Bolivia. It is also important to recognize, as Jeffery Webber and Forrest Hylton have pointed out, that while some leftist and popular-sector organizations participated in recent opposition against Morales, this movement was primarily middle class. By the end it was decisively led by the Right, which is the clear “winner” of the coup against Morales.

Bolivia is undergoing the consolidation of a far-right regime of terror. This regime can be seen as a dictatorship-in-embryo due to the systematic violation of political and human rights. Since Morales resigned, the following horrifying events have occurred: State security forces have killed peaceful protesters. The “acting” president, Jeanine Áñez, issued a decree exempting armed forces personnel from prosecution for the use of force. Áñez stated that Morales’s MAS may not be allowed to participate in future elections, despite MAS being by far Bolivia’s largest political force. The acting minister of government said that MAS senators will be detained for “subversion and sedition.” And there is a rising wave of anti-Indigenous racism. Multiple groups have publicly burned the Indigenous wiphala flag, and video shows police in Santa Cruz cutting the wiphala, which became an official national symbol under Morales, from their uniforms.

The manner in which Áñez assumed the presidency is deeply concerning for two reasons. First, it could not have occurred without the forced resignations of Morales, his vice president Álvaro García Linera, and the presidents of the Senate and Chamber of Deputies. These resignations were in no way voluntary: They happened in the context of the kidnapping of MAS officials’ relatives and burning of their houses. With those above her gone, Áñez staked her claim to the president’s office, despite the fact that as vice president of the Senate, she had no constitutional authority to take on this role.

Second, Áñez was sworn in as president in a nearly empty Senate lacking quorum, with MAS senators, who control two-thirds of seats, boycotting partly due to fears for their safety. Áñez was sworn in with an oversized Bible, and stated, “the Bible has returned to the palace.” On November 10, Áñez’s mentor, Luis Fernando Camacho, entered the vacant presidential palace and kissed a Bible atop a Bolivian flag. A pastor with Camacho said, “Pachamama will never return to the palace.” Camacho and Áñez are both fervently Christian and highly racist. It is no coincidence that their rise has seen an unprecedented increase in anti-Indigenous racism across the country, marked in the weeks before Morales fell, and even more widespread ever since.

Áñez’s party received just 4 percent of the vote in the October 20 election. On top of the extremely questionable sequence of events that led Áñez to the presidency, this shows her illegitimacy and lack of any mandate. Yet Áñez and her associates have shown themselves to be unbothered by such scruples. Even more concerning than the circumstances of her rise to power is the manner in which Áñez has governed. She has assembled a cabinet that initially included no Indigenous ministers. She has thoroughly reoriented Bolivia’s foreign policy, breaking relations with Venezuela and Cuba and talking of leaving the Union of South American Nations and the Bolivarian Alliance of the Americas, which she may have already done. And she has unleashed the full force of the police and reconstituted military—she appointed new top brass—against the rising wave of protest elicited by her and her associates’ actions.

Images of the wiphala burning sparked massive Indigenous marches across the country. These and other marches—calling for Áñez’s resignation, new elections, the military’s return to the barracks, and freeing detained protesters, amongst other things—have been met with fierce repression, with police and military forces using tear gas and live bullets. According to the Inter-American Commission on Human Rights, as of November 16, Bolivia’s recent violence had resulted in at least 23 killed and 715 injured, with police and military responsible for much of this. The worst violence last week happened on November 15, when police and military forces killed nine nonviolent protesters in the town of Sacaba as they attempted to cross a bridge to move towards the city of Cochabamba. This occurred just after Áñez issued a decree, behind closed doors, exempting state security forces from legal prosecution for the use of force against public protest, effectively granting them a license to kill.

Reports are now coming in that state forces have killed five to seven protesters in El Alto, although the precise death toll is not yet known. This indicates that the international condemnation Áñez received last week for the Sacaba massacre, from the Inter-American Commission on Human Rights, the UN High Commissioner on Human Rights, and some Democrats in the United States, has done nothing to stop the state from continuing to murder nonviolent protesters.

Bolivia’s political situation is also moving in a terrifying direction. MAS supporters and leaders face increased repression and a closing of political space. Áñez’s minister of government, Arturo Murillo, called an ex-minister of Evo Morales “an animal” whom he would “hunt down.” Murillo also said he has “a list” of MAS senators and deputies he plans to detain for “sedition and subversion.” This comes after MAS senators were prevented by the police from accessing the Senate, and physically roughed up in the process. Áñez has also stated that MAS may not be allowed to run in future elections and promised to prosecute Morales if he returns to Bolivia. There have also been official statements threatening “seditious” journalists. Just last week, a police officer tear-gassed an Al Jazeera journalist reporting live television.

It is unclear what, if anything, can stop Bolivia’s descent into a full-blown far-right military dictatorship. There are, however, some important developments to keep track of. There is the growing condemnation of Áñez by international human rights organizations and progressive politicians. Prominent Democratic Party politicians have also spoken out, with Bernie Sanders doing so most forcefully, and Elizabeth Warren doing so as well, albeit in a more equivocal way. There have been some talks between MAS and sectors of the opposition over the possibility of scheduling new elections. However, the repression against MAS makes it unclear how far these talks will progress. Finally, there is the response of Bolivian social movements, which have been engaged in marches and blockades throughout the country. It is important to note that these mobilizations include not just MAS supporters but also a broad swath of popular sectors that repudiate the right-wing seizure of the state. Actions by movements may pose a real threat to Áñez’s ability to govern. The state’s ferocious response so far suggests this will be a long, uneven, and deadly struggle.

Gabriel Hetland is an assistant professor of Latin American, Caribbean, and U.S. Latino Studies at the University at Albany.