The Highs and Lows of Bolivia’s Rebel City

Known as the epicenter of anti-austerity rebellion during Bolivia’s Gas War, El Alto remains a powerful example of the potential for local movements to leverage their cities to shape national politics. 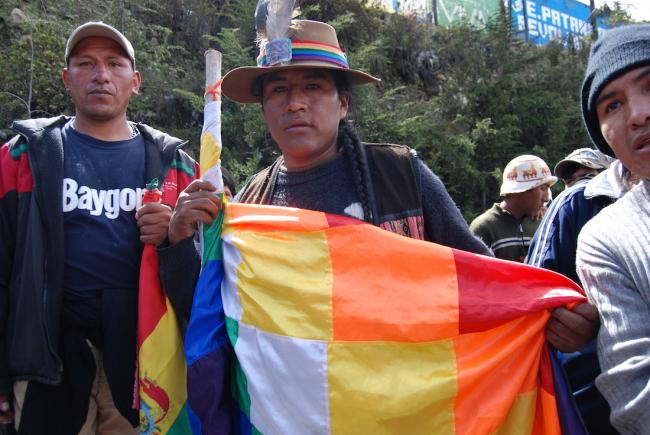 For two weeks during October 2003, the residents of El Alto, Bolivia, transformed their city into a tool of struggle as protests paralyzed the city and laid siege to its contiguous twin, Bolivia’s seat of government, La Paz. The poor, marginalized city confronted and defeated a national government and the might of its military, forcing president Gonzalo “Goni” Sánchez de Lozada to fall. In the process, as one local resident said, “El Alto gave the country political and economic direction.”

It was this rebellious character that drew me as a researcher to El Alto, a place known for fearsome social movements and experiments with radical democracy outside the state. I arrived in January 2016, expecting to find a haven of social movement radicalism. During my year wandering the city, attending local political meetings, speaking to local people, and interviewing the leadership of alteño social organizations, I found something very different. While the memory of October 2003 was apparently fresh in the minds of the older generation of leaders, political activity at the time was limited. The one general strike and shutdown of the city called by the Federación de las Juntas Vecinales de El Alto (Federation of Neighborhood Councils of El Alto, FEJUVE-El Alto) in June 2016 was only partially effective, garnering minimal turnout. Was this the end of the rebel city? Had Morales’s Movement Towards Socialism (MAS) party been so successful at addressing the city’s problems that there simply was no need for radical social movements?

These are questions that radical movements in El Alto have been grappling with, and they speak to broader concerns of social movements in the wake of the Pink Tide governments that swept the region in the first decade and a half or so of the 21st century. Mapping the rise of El Alto as a rebel city under neoliberalism, its coming of age in anti-neoliberal protests at the turn of the century, and its place under the government of President Evo Morales offers lessons on the potential and challenges of radical movements and experiments of building alternative urban realities under Left governments in Latin America.

Identifying El Alto as a rebel city is an apparent truism for many in Bolivia. This is particularly the case for the residents of the city itself. In order to properly grasp the significance of this popular imaginary, we must return to the birth of El Alto. Originally a poor suburb of La Paz sitting on the highland plateau (altiplano) at over 13,000 feet above sea level, El Alto and its population exploded during the 1980s, eventually securing city status in 1988. The El Niño/La Niña weather event in 1982 and 1983 led to widespread crop failures and forced people from agricultural zones on the altiplano into El Alto, while the implementation of neoliberal reforms in 1985 privatized the state-run mines and crushed the powerful miners’ union. This violently expelled the miners from their encampments in the departments of Oruro and Potosí, which—coupled with the opening up agriculture to foreign competition—brought migrants to Bolivia’s urban centers in droves looking for work. Intense processes of class formation and urbanization ensued as new arrivals joined the swelling ranks of the informalized labor force and built their own city.

Bolivia was not alone in these processes. Concurrent urbanization and class formation swept across Latin America following the 1973 coup installing Augusto Pinochet’s dictatorship in Chile, and these processes later accelerated in the wake of the 1982 Mexican debt crisis. While the most salient characteristics of neoliberalism are those most discussed—financial and trade liberalization, the crushing of the labor movement, and putative austerity measures—is it also important to highlight that the transformation of space and scale also marks neoliberalism. Philosopher Henri Lefebvre called this “an explosion of space.”

Across the continent, new arrivals to urban areas met scant state support and set about building homes for themselves, and so-called informal settlements expanded urbanized zones and transformed existing urban space. The state took a step back from social service provision. However, rather than shrinking or diminishing, the state rescaled and assumed new responsibilities, creating what geographer Neil Brenner has termed “new state space.” The liberalization of trade and finance in the context of liberal triumphalism following the fall of the Berlin Wall in 1989 placed supranational institutions such as the World Bank, International Monetary Fund, and World Trade Organization center stage, accompanied by a proliferation of bilateral trade agreements. While the state scaled up, it also scaled down to the local level through devolution or decentralization, giving municipalities more control over local resources.

In Latin America, this was part of a larger democratization project, which produced contradictory outcomes. In the face of medium-term trends under neoliberalism of deteriorating social services and working-class quality of life, left-wing municipal councils started experimenting with new forms of local-level participation. The Frente Amplio (Broad Front) gained control of the municipality of Uruguay’s capital Montevideo, while Izquierda Unida (United Left) and Causa Radical (Radical Cause) controlled the capital city councils of Lima, Peru, and Caracas, Venezuela, respectively. The most notable experience of what became known as “municipal socialism” was that of Porto Alegre, Brazil, where the Workers’ Party (PT) came to power in the late-1980s and implemented participatory budgeting, democratizing the distribution of municipal funds and encouraging the city’s residents to participate in state processes.

In Bolivia, decentralization came in the form of the 1994 Ley de Participación Popular (Law of Popular Participation, LPP), which divided the country into 311 municipalities and doubled municipal authorities’ share of the national budget from 10 percent to 20 percent. This assigned local authorities most administrative responsibilities of the state, including the construction, maintenance, and management of health care, education, roads, micro-irrigation systems, and sport facilities. The LPP created a new legal category within civil society, Organizaciones Territoriales de Base (Grassroots Territorial Organizations, OTB), to give communities greater control over state resources. OTBs incorporated peasant communities, Indigenous peoples, and neighborhood committees known as juntas vecinales into participation processes according to their customary practices and organizational statutes. This assigned a new role to the juntas vecinales in El Alto, which had previously played a key role in orchestrating processes of informal—rather than unorganized—self-construction during the early years of the neoliberal period by distributing idle municipal land occupied by newly arrived migrants, organizing communal labor to build schools, road, and other vital public services, as well as lobbying the state for utilities such as water, gas, electricity, and paved streets. When implemented, the LPP gave these organizations opportunities to shape the use of municipal resources through participating in writing the five-year Municipal Development Plan and the Annual Operating Program, while also performing important oversight functions.

On the surface, the LPP appeared to be a political step forward for urban working-class people. However, it was promulgated in the context of state reforms and the privatization of gas and other public enterprises that stripped the state of its primary revenue.

Angus McNelly is a lecturer in International Development and Latin American Politics at the School of Politics and International Relations, Queen Mary University of London. He completed his PhD on the experiences of the Left in power in Bolivia earlier this year, and has written on Bolivian social theory, social movements and the MAS government, the political economy of Bolivia, and the labor movement.