The movement against racist immigration policing and the detention of child migrants in San Diego in the 1980s offers important lessons in keeping open borders at the forefront of activism. 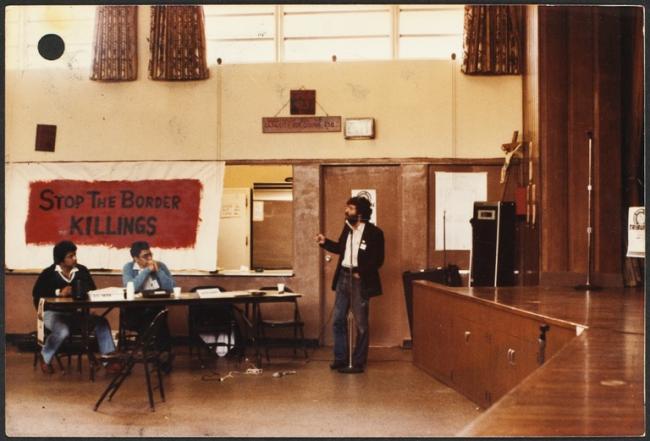 In February 1980, Herman Baca, a Chicano activist from San Diego, wrote a letter to President Jimmy Carter demanding he put an end to “border madness.” In the letter Baca detailed how officials from the Immigration and Naturalization Service (INS) were detaining Mexican migrant children in local jails and immigration facilities. In particular, he denounced the detention of a 12-month-old baby as “barbaric” and “inhumane.” While Baca urged Carter to enter into discussion with policymakers, he believed that ultimately the detention of migrant children would only end with the abolition of the INS.

Continuing this activism, in 1981, Baca organized the first community-based call for the abolition of the INS. The call cited the detention of migrant children as an example of the abuse the organization would never cease committing. Such abolition advocacy, which is captured in Baca’s papers held at the University of California San Diego Special Collections and Archives, shows that the movement to abolish institutions of immigration policing did not emerge recently in the face of the Trump administration’s “zero tolerance” policy. While scholars have grounded the movement to abolish Immigrations and Customs Enforcement (ICE) in the ideological history of abolitionism, most have focused on prison abolitionism, overlooking previous movements to eliminate immigration policing. A closer look at Chicano activism in the late 1970s and early 1980s shows that immigration police have long targeted migrant children and that activists have been denouncing related violence for decades. Recognizing that the fight to abolish immigration policing is not new helps to better imagine a just world without immigration policing. 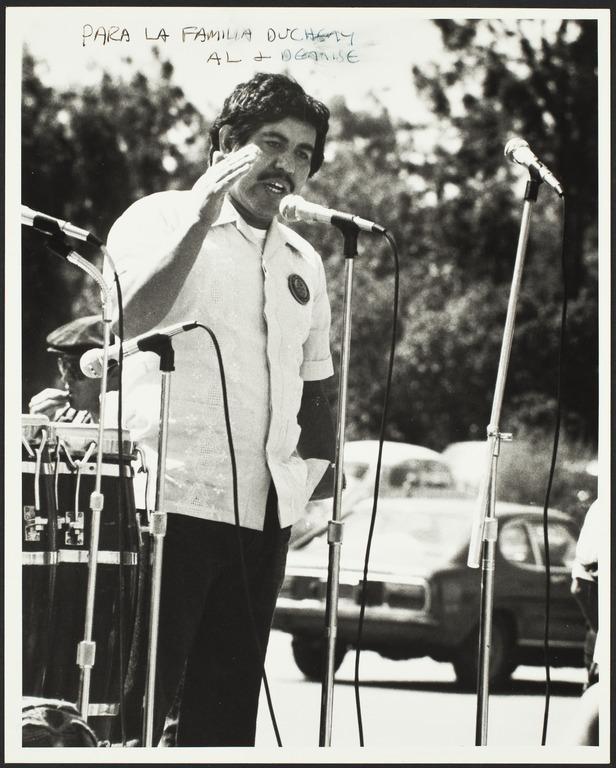 The Detention of Migrant Children

In 1979 Baca’s organization, the Committee on Chicano Rights (CCR), began to speak out against the detention of migrant children. Baca and friends formed the CCR in 1971 to fight violence Chicano and migrant youth faced as the “era of undocumented immigration” led to increased policing. As members of the Chicano Movement, these activists viewed open borders as an end goal. “We didn’t cross the border, the border crossed us,” student activist Salvador Reza told me, reflecting on the border’s connection to Mexico’s loss of land to the U.S. in 1848. “Basically, we had the right, somos un pueblo sin fronteras.” Believing individuals of Mexican descent to be a “people without borders,” activists like Reza and Baca protested and advocated for policy change as part of a campaign to denounce immigration policing and its inherent denial of the community’s right to move freely in the borderlands.

Baca began to raise awareness about the detention of migrant children in 1979 to inspire resistance to the policing of Chicanos and migrants. While Baca had been fighting immigration policing for several years at this point, the community’s particular concern for migrant youth played a crucial role in his ability to drum up mass support for abolitionism. Baca presented information about migrant detention at the CCR’s Chicano National Immigration Tribunal held in April 1981. Designed to put policies of immigration policing on trial, the Tribunal gave victims the opportunity to act as prosecutors: Individuals presented testimony in over 50 cases of violence committed by local police and the INS. Activists from the CCR listened to this testimony with the intention of using it to construct policy demands in the form of a “Chicano position paper.” 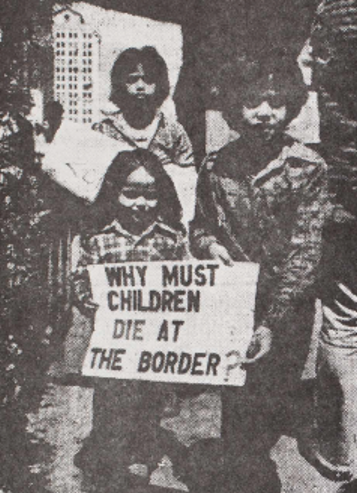 At the Tribunal, Baca highlighted how the detention of migrant children connected to the racist criminalization of non-white youth. Baca’s testimony, coupled with local newspaper reporting, revealed that as immigration policing militarized the border throughout the 1970s, it became common for undocumented migrants, especially children, to hire smugglers to help them cross the border. While in 1965 only 40 percent of migrants used a smuggler, by 1975 over 70 percent of migrants did. However, traveling with a smuggler did not ensure successful settlement in the US. The Border Patrol, the enforcement arm of the INS, working to stop both human and narcotic smuggling, often apprehended migrants during their crossing.

In the 1970s, the U.S. government intensified its prosecution of smugglers. While at this time the INS quickly deported undocumented migrants, the agency treated smuggling as a criminal act that merited a trial. As part of this prosecution, officials detained migrants who crossed the border with a smuggler and forced them to serve as material witnesses in the cases. Migrants being held until giving their witness testimony formed a substantial portion of the tens of thousands of migrants the INS detained annually in San Diego. In 1979, 14,346 migrants served as witnesses in cases against smugglers in San Diego, around 600 of whom were children.

The children waited for the trial of their smuggler at three detention centers in San Diego. The INS held some children at their two facilities in the region: El Centro and San Ysidro. However, they sent most to the Metropolitan Correctional Center (MCC) which had a relationship with the U.S. Marshalls, an agency with a history of facilitating the detention of migrants. The MCC opened in 1974 as part of the ongoing war on crime. In revealing that police held material witnesses at the MCC alongside individuals charged with criminal offenses, Baca demonstrated how immigration officials criminalized migrant children who had an ancestral right to exist in the borderlands.

Although designed as an adult facility, the INS used the MCC to hold children like 15-year-old Jose, who came to California from Durango, Mexico. While police incarcerated some children with their mothers, they separated most, including Jose, from their parents. At 15, Jose was one of the oldest children in the facility. The INS imprisoned Rosa Rivas’s 6- and 1-year-old children without her. When the INS brought a mother back into custody after giving birth, they even incarcerated a newborn.

While Baca previously criticized perceived links between Mexican teenagers and criminality, he made a strategic decision to turn his attention to younger children in his letter to Carter and at the Tribunal. Baca believed that focusing on young children would “dramatize” immigration policing and demonstrate how it criminalized innocent youth. Baca, like other activists past and present, trusted that no one could dispute the cruelty of incarcerating a newborn and that this common sympathy would garner criticism of immigration policing as a whole.

Baca’s was correct: The Chicano community agreed with him about the brutality of incarcerating children. In spearheading mass outrage over the detention of migrant youth, Baca connected his work to protect migrant children with his ideological emphasis on open borders.

Baca first proposed the abolition of the INS to fellow activists at a conference in 1980. The resolutions passed at the end of the gathering stated: “That this conference go on record in calling for the abolishment of the INS/Border Patrol.” A year later, at the Tribunal, Baca fostered more unified Chicano support for this demand. As Baca recalled, by the end of the Tribunal, “Everybody was on the same page of the INS/Border Patrol have got to go...It’s an agency that was placed there to make sure we stay in our place. And that’s what we’re fighting against.” Having learned about the INS detaining children, community members concluded that the organization existed to impede the right of Mexican youth to live and migrate safely. As a result, the documents produced at the Tribunal affirmed the need “for the abolishment of the INS/Border Patrol” in order to end the detention of migrant children, among other practices. 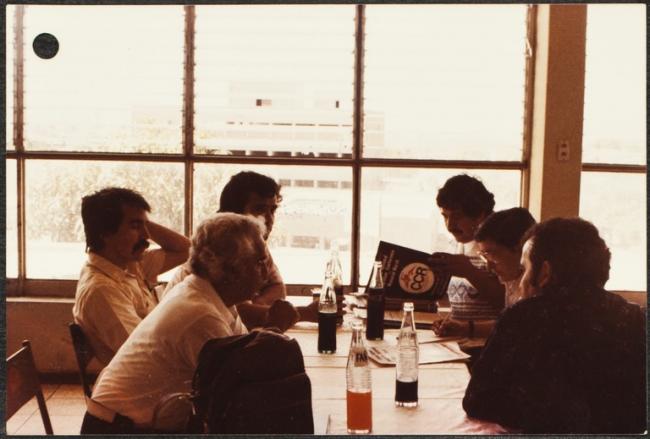 By this point, support for the idea of abolition was spreading. For the first time, a large portion of the Chicano and migrant community in San Diego expressed the need for the complete elimination of the INS. As a journalist from La Prensa San Diego reported in 1981, when Baca announced his demand for the “disestablishment of the INS,” the audience of 800 individuals “roared with approval.” By that year, CCR leaders and community members together concluded that the INS needed to be completely and permanently abolished to allow free and safe movement in the borderlands.

Noting this mass support for the abolition of the INS, Baca vowed from then on to not “deal with anyone who doesn’t call for the abolishment of the Border Patrol, the INS.” While Baca remained steadfast in his dedication to abolition, and today is outspoken against ICE, after the passage of the Immigration Reform and Control Act of 1986 many former allies shifted their focus to assisting undocumented migrants in applying for amnesty.

In 2003, the U.S. government dissolved the INS, which had been part of the Department of Justice, and replaced it with ICE, which falls under the Department of Homeland Security. Today, as people speak out against ICE’s detention of migrant children, who now mostly come from Central America, this country has once again seen a rise in calls for the elimination of institutions of immigration policing as they currently exist.

The history of pro-migrant activism that began in the Chicano community in the 1970s and 1980s helps position today’s abolition advocacy as grounded in traditions of Chicano activism. Besides valorizing a long-ignored historical actor, exploring Baca’s work urges a recognition of the principles that guided nascent pro-migrant abolition advocacy. It is imperative that present-day Abolish ICE supporters contemplate the desire for open borders that underpinned the first calls for the abolition of ICE’s predecessor, the INS. For instance, returning immigration policing to the Department of Justice, as Bernie Sanders recently proposed, fails to recognize Baca’s belief that the mere existence of immigration policing is a threat to the borderlands community. Only by embracing these historical antecedents can we build bold and inclusive resistance to the policing of migrant youth.

Erin Mysogland is the Program Coordinator of the Center for Community Action and Research at Pace University where she works with undergraduates to connect academia and activism.  She has a MA/MSc in International and World History from Columbia University and the London School of Economics.  She researches and writes on themes of migration, race, and gender in U.S. and Latin American history.