Medellín’s flagship public space interventions fall short of remedying structural problems, but for local residents in Comuna 13, the city’s changes offer a platform to advance their struggles for social justice in creative ways. 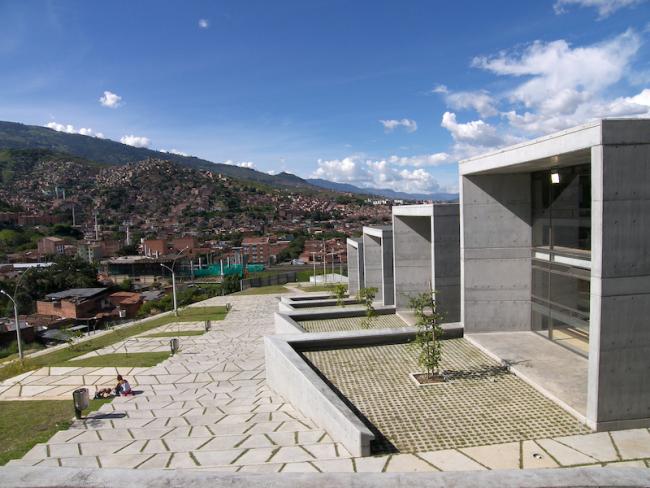 A young woman lies motionless on the floor as her friend scatters a line of flour around the outline of her body. The terrace outside the San Javier Library Park is one of Medellín’s innovative investments in public space targeting marginal areas of the city, like Comuna 13. On this warm October day, it is full of the outlines of bodies. People step carefully across the lines of flour that represent the participants’ many friends and relatives who have been lost to the extreme violence of the region. Under the banner Operación Orión Nunca Más (Operation Orión Never Again), the mock crime scene and other community activities are just some of the ways that the neighborhood marks and remembers its troubled past.

Comuna 13, a large neighborhood perched on the western fringes of Medellín, has become the face of significant change in the city in recent years. As a focal point of Medellín’s celebrated approach to urban development, it houses numerous new infrastructure projects and attracts praise for having escaped its particularly violent past. Against the backdrop of Colombia’s peace process and widespread changes at both a national and municipal level, Comuna 13 residents commemorate the multiple forms of violence they have experienced. Their actions seek not only to remember the past, but also to continue to raise perpetually unanswered questions and voice their ongoing demands of the local and national government, revealing that the mainstream narrative of urban transformation is both incomplete and contradictory. Infrastructure projects and shifting approaches to urban governance have provided new opportunities and spaces for residents that activists, social movements, and the community now claim in inventive and creative ways. Though the municipality’s urban interventions in Comuna 13 fall short of structural transformation, residents seize the changing public space in the neighborhood as another resource to fight for justice and further social and political reforms.

The day of activities in Comuna 13 on October 16, 2017, marked the 15th anniversary of Operación Orión, a particularly bloody and brutal military operation that devastated the area. As part of former hardline president Álvaro Uribe’s so-called “Democratic Security” policy that prioritized combatting leftist insurgents, Medellín—and by extension Comuna 13—became a strategically important site for a military crackdown on the years-long control of the area by left-wing guerrillas. Orión was the last of 11 military operations deployed in Comuna 13 in 2002. Tanks rolled into the densely populated area, as several days of warfare gripped the neighborhood with heavily armed state forces—including the police and the military, alongside state-supported paramilitaries—fighting to eliminate the guerrilla rebels. The conflict caught civilians in the crossfire, impacting local residents indiscriminately. While the consequences are disputed and remain a point of contention in the city, Corporación Jurídica Libertad, a human rights NGO based in Medellín, reports that 88 people were killed, and hundreds were wounded, detained, displaced, or disappeared, many remaining unaccounted for to this day.

The government hailed Orión as a success, celebrating the supposed pacification of the area and overlooking the significant scars the violence left on the neighborhood. While homicide levels fell in the following years, the violence did not cease. Instead, control of Comuna 13 passed from one armed group to another as right-wing paramilitaries—tied to the Colombian military and government, including Uribe and his allies—moved in to fill the vacuum as the armed authority. Security issues continued to define Comuna 13, which again earned the label of the most dangerous neighborhood in Latin America as recently as 2010.

Numerous community groups came together to commemorate the anniversary and Orión’s lasting destruction through Operación Orión Nunca Más, which represented the culmination of years of campaigning for justice. For the anniversary, community groups and movements designed events and activities to reject violence while commemorating the losses in their own ways, often taking advantage of the neighborhood’s public space that a series of progressive municipal policies and developments have rendered more accessible. Some simply opened the doors of their organizations to the community, while others scheduled rap and poetry performances, opened spaces to talk about accounts of violence in the neighborhood, and organized crafts and creative interventions in public space.

A side from Operación Orión, Medellín is home to a complex history of violence that has included left-wing guerrilla forces, drug cartels, gangs, and paramilitaries, as well as state security forces. In the 1980s and 1990s, the city was known as one of the homicide capitals of the world. From the mid-2000s onwards, Medellín began to shed its reputation of extreme violence, a shift most famously attributed to the progressive mayor Sergio Fajardo and the concept he championed: social urbanism. This innovative approach to urban planning emphasizes participation, inclusion, and innovation, focusing primarily on peripheral and informal neighborhoods previously neglected by the state. Fajardo describes himself as being outside of the dominant party politics of the region, leading instead what he termed an independent civic movement that envisioned a progressive politics that was both pragmatic and business-centered. Upon entering office in 2003, Fajardo proclaimed his plan to build the most beautiful buildings in the poorest neighborhoods, stating that this brought a powerful message of social inclusion. The Medellín Model emphasized a rebranding of the city, shifting the conversation from extreme violence to instead encouraging economic growth from business investment and tourism. Since then, Medellín has gained international recognition for this approach to municipal governance and received multiple awards, most recently including the 2016 Lee Kuan Yew World City Prize, celebrating sustainable urban development.

The face of this urban development strategy is the visible investments in public space and infrastructure, such as the renowned escalators in Comuna 13, government buildings for public use such as library parks in predominantly poor and marginal neighborhoods, and several cable car lines connecting residents living high in the steep Andean slopes with Medellín’s metro lines. While these projects are the best known, social urbanism isn’t limited to infrastructure; the government has also implemented participatory budgeting and various social programs such as childcare for children under 5 years old and support services for victims of domestic violence. The infrastructure investments and other interventions have coincided with a reduction of violence and broader change in the nature of public space, though residents paint a more complex picture of a multifaceted transformation process beyond government interventions alone. Nevertheless, a significant decrease in homicides from a high of 375 per 100,000 in 1991 to 23 per 100,000 in 2017, according to medical examiner’s office data, led to the city—and its approach to urban development— being celebrated across the globe.

However, the measures are not without criticism. Urban development researchers such as Luisa Sotomayor, Tobias Franz, and others question the so-called Medellín miracle for its failure to tackle entrenched inequalities, a position echoed by some of the city’s residents.

Alexandra Young is a PhD candidate at Newcastle University, looking at gender and urban development in Colombia. Her research interests include social movements, participatory arts, gender, and violence, and are complemented by her background working in the arts and non-profit sectors.