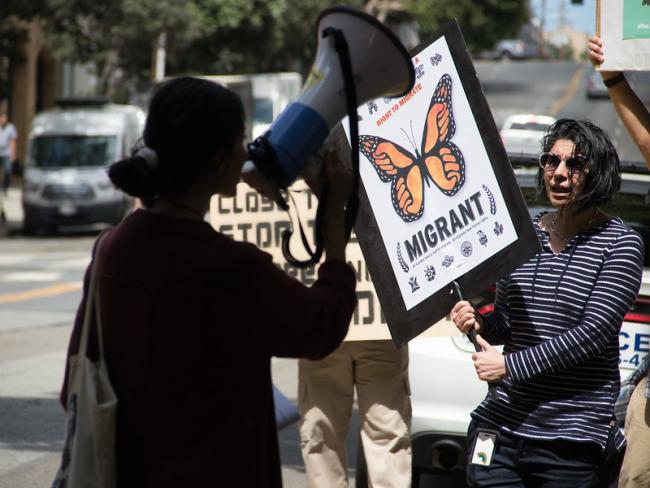 Earlier this year, the Homestead Temporary Shelter for Unaccompanied Immigrant Children in Miami, Florida, became a press pitstop for Democratic presidential candidates on the campaign trail. Months of dedicated community action won the attention of potential nominees, including Harris, O’Rourke, Warren, and Sanders. Each of them climbed a stepladder and peered over the fence to ultimately condemn the abuses at Homestead, the only for-profit facility of its kind to have a federal contract. In Homestead’s case, a shocking record of sexual assault, medical neglect, and physical violence against children emerged, and when the facility’s contract expired on November 30, the government declined to renew. The Department of Health and Human Services is now keeping Homestead in “warm status,” meaning that no children are currently being held at the site, but the infrastructure remains on stand-by for potential future use.

Homestead’s effective closure was a small victory in the larger battle for unaccompanied immigrant children’s rights. It removed thousands of individual children from an unsafe environment and sent a clear message to the Trump administration that such inhumane detention models are unacceptable.

But the fight is far from over. Countless allegations of abuse in other for-profit facilities demand immediate action, and local activists know that sustained action is the only way to prevent corporations from seeking profits through the detention of unaccompanied immigrant children. A critical analysis of Homestead can serve as a framework through which we can recognize abuse within other detention facilities, and ultimately pave a road towards a system that is both practical and humane.

Immigration officials legally classify children as Unaccompanied Alien Children (UACs) when they arrive at the border alone, or when they have been forcibly separated from their families during intake at Customs and Border Protection (CBP) checkpoints. UACs are legally defined by U.S. Title 6 Code as “children who lack lawful immigration status, are under age 18, and are either without a parent or legal guardian in the United States or without a parent or legal guardian in the United States who is available to provide care and physical custody.” There has been a sharp increase in arriving UACs in recent years, as decades of U.S.-backed political destabilization make living conditions in Honduras, Guatemala, and El Salvador increasingly untenable. More than 72,000 unaccompanied immigrant children had been apprehended in FY2019 as of August, as compared to the approximately 18,000 in 2010.

While single adults and families seeking asylum at the U.S.-Mexico border are transferred from CBP to the Department of Homeland Security’s Immigration and Customs Enforcement (ICE), unaccompanied immigrant children are referred to the Department of Health and Human Services’ Office of Refugee Resettlement (ORR). ORR is responsible for the care of these children in what relevant law defines as “the least restrictive shelter environment.” ORR is further obligated to meet a minimum standard of conditions and facilitate family-based placement as quickly as possible, in recognition of the dangers children face when held in custody for any extended period of time.

Although the majority of arriving children have eligible family members in the United States willing and able to immediately assume guardianship and asylum sponsorship, this is not without complication. Punitive policies aimed at undocumented immigrants, combined with widespread case mismanagement, have prevented family reunification, resulting in the lifelong traumatization of untold numbers of unaccompanied immigrant children.

A substantial obstacle in the battle for meaningful reform to the United States’ UAC program is the political rhetoric surrounding child detention centers. The legal obligations that would, in theory, differentiate a “shelter” from a “detention center” are not fulfilled in practice. This results in a dangerous disconnect between the public’s understanding and the reality of the situation. This rhetorical debate manifested publicly during the fight to close Homestead.

After visiting the facility, Elizabeth Warren said: “Homestead is hot and barren, with a completely enclosed fence. I saw children being marched from one building to another in single file lines. No laughing, no playing. These are children who are prisoners.” Miami New Times reporter Jerri Ianelli has said: “I’ve toured prisons in my job, and the place looks like a prison. It just does.” Despite these claims, director of ORR, Jonathan Hayes, has insisted that the characterization of Homestead as a detention center is inaccurate. Hayes penned a letter to the editor in response to criticism asserting: “HHS will continue to treat the children in our care with dignity and respect.”

Government agency representatives understand that the public perception of their programs influence policy makers’ budget decisions. And the private corporations’ monetary stakeholders understand how this in turn affects their own bottom line. The distinction is integral. As long as the administration is able to successfully manipulate rhetoric in order to make a fundamentally inhumane institution appear acceptable—or inevitable—policies aimed at reform have little hope of affecting sustainable change.

Regardless of the clear causal relationship between privatization and abuse in immigration detention, nonprofit UAC detention facilities have also failed to consistently protect the rights of children in their care. Nonprofit facilities have more stringent requirements than facilities like Homestead, such as mandatory state-licensure and increased access for local government and NGO oversight. However, these requirements are not always met.

The most salient example is Southwest Key Programs, an organization that has collected over $1.7 billion in federal contracts over the past decade for the care of unaccompanied minors. In 2018, an investigation revealed dozens of violations in the background checks of employees working with Southwest Key. HHS data shows a reported 65 cases of sexual assault against minors by Southwest Key employees between October 2014 and July 2018. However, insufficient reporting mechanisms for children experiencing sexual abuse inside have likely prevented countless more victims from coming forward. In December 2018, a leaked surveillance video showed employees physically assaulting child detainees. No charges were pressed. Southwest Key has also demonstrated egregious case mismanagement. In an audit from the Office of the Inspector General in 2016, the corporation was unable to confirm the number of family reunifications they reported to HHS. According to the report, there were “alien identification numbers associated with more than one child, duplicate records for the same child with different outcomes—reunified vs. runaway—and different release dates.”

Although most Southwest Key shelters arguably do not emulate prisons as explicitly as Homestead did, some of their shelters have come under fire for their warehouse-like conditions. Casa Padre, a Southwest Key shelter in a converted Walmart Supercenter in Brownsville, Texas, has an average daily capacity at nearly 1,500 children. Trauma experts insist that facilities housing an average of even 500 children daily constitute conditions that are negligent and fundamentally incapable of providing children with the individualized care they need for safe and healthy development. The majority of unaccompanied immigrant children have already endured unfathomable violence in their home countries, as well as on their arduous journeys north, and even a short stay in a shelter like this can contribute to lifelong psychological trauma.

An Abolitionist Vision for Meaningful Reform

The current state of UAC detention and shelter mismanagement is inextricable from the wider Immigration Industrial Complex and the legacy of war-on-drugs and war-on-terror policies that have made the United States into the world’s leading carceral state. As long as the public continues to condone mandatory immigrant detention in the name of national security, migrants will remain vulnerable to abuse in a system that consistently prioritizes profits over their safety and dignity. This is why meaningful reforms for treatment of unaccompanied immigrant children must be rooted in an abolitionist framework that recognizes the historic pathway to mass incarceration, as well as the inability of the carceral state to solve the problems it creates.

Although unaccompanied immigrant children are under the purview of HHS—a state agency that is not, in theory, concerned with criminalization—as opposed to DHS, it is clear that criminalization is increasingly pervading its services. A Memorandum of Agreement allowed information sharing between DHS and HHS, and ICE has used this data to identify and deport family members and potential guardians of unaccompanied minors. If the administration focused on releasing children as quickly and safely as possible, the need for warehouses and influx detention centers would be eliminated.

Studies show that alternatives to detention, including community-based programs and effective case management are not only more humane, but significantly cheaper than the status quo. In a situation in which children must be held, they should be placed in small-scale, state-licensed shelters. Smaller shelters and family-based care are uniquely able to attend to individual children’s needs and operate with increased transparency. This can be done through increased partnerships with local religious groups, social workers, and family-based care. Although an overflow shelter such as Homestead might seem financially attractive on its face, the human costs outweigh the fiscal benefits. Ultimately, investing in sustainable solutions will mean a more effective allocation of government resources, and a system that will be equipped to deal with increased unaccompanied child arrivals in the future.

The nonrenewal of Homestead’s active contract offers several important lessons. For one, mobilization works. Although the media frenzy in the final push of the Homestead campaign helped to carry it over the finish line, the necessary national attention would have never materialized without the preceding months of dedicated community organizing. Some organizations that were heavily involved included AFSC, United We Dream, and Freedom for Immigrants. Furthermore, rhetoric matters. Manipulative rhetoric about the reality of government contracted facilities is violent and perpetuates abuse.

Increased familiarization with the case of Homestead can help the public recognize what environmental and administrative conditions allow abuse to continue behind closed doors. With luck, a new report or testimony can offer a proverbial stepladder—a brief glimpse that can inspire change. But more often than not, the abuse is invisible. This is why the use of an abolitionist framework aiming to end all immigrant detention is the most durable way to demand the protection of children’s safety and dignity within government custody.

Jennie Rose Nelson is an immigration activist from San Diego, California, where she is affiliated with the migrant rights organizations Otay Mesa Detention Resistance and Border Angels. She is currently a student with Columbia University’s Institute for the Study of Human Rights.