The Right’s Continued Dominance in the Dominican Republic

After two decades of rule by the reactionary Dominican Liberation Party reign, the task of democratizing the Dominican Republic remains a difficult one. 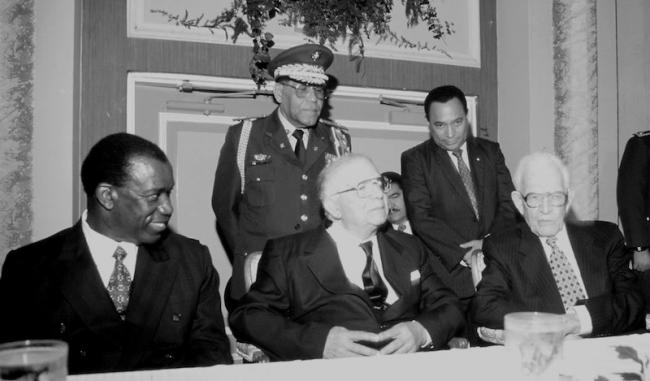 Over the past two decades, reactionary politicians in the Dominican Republic have expanded their influence under the governing Partido de la Liberación Dominicana (PLD, Dominican Liberation Party), which has held presidential power for eighteen of the past twenty-three years since 1996. Except for a brief hiatus from 2000 to 2004, the neoliberal, center-right PLD has been in power until now. As payback to right-wing electoral support, the PLD leadership have given right-wing politicians access to power including top positions in government agencies and embassies — and, most important of all, a platform that, over the years, revitalized right-wing ideology.

By the 1990s, the formerly center-left PLD had won the support of powerful local elite sectors with a politics of moderation. In turn, traditional and conservative rich sectors began to bankroll the PLD’s electoral campaigns, accelerating the PLD’s transformation from a progressive, center-left party once led by a self-declared Marxist into a neoliberal party that is today on the center right of the country’s political spectrum.

The PLD’s right turn happened at the very moment when the Soviet bloc was beginning to disintegrate, an epochal change that reverberated in Latin America and the Caribbean and weakened, divided, and demoralized left-wing intellectuals, progressive organizations, and Communist parties.

If indeed socialism was no longer viable, like the free-market propagandists argued, then fighting for political reforms would now be relegated to a second place. This newly adopted logic became the dominant ideology of the age, and impacted the PLD and others, creating a fertile ground for the neoliberal takeover led by both technocrats and right-leaning political actors.

A “New Party” Is Born

Founded by former president and superb writer Juan Bosch (1909–2004) in 1973 as an instrument for “national liberation,” the birth of the PLD was a new episode in Bosch’s long political career. During his exile in Cuba, Bosch cofounded the once (nominally) social-democratic Partido Revolucionario Dominicano (PRD, Dominican Revolutionary Party) during the heyday of resistance against Rafael Leónidas Trujillo Molina’s dictatorship (1930–1961).

Upon his return from a twenty-three-year exile in several Latin American nations, Bosch ran for president under the PRD in 1962, inaugurating the first democratic government of the post-dictatorial era. While it is true that Bosch’s government signaled the end of fascist violence, Bosch also used a conciliatory tone with former Trujillo collaborators (Trujillistas).

But the oligarchs, the old Trujillist army, and the Catholic Church hated Bosch and the democratization process spurred by his election. In September 1963, a US-backed military coup d’état put an end to the first democratically elected president after the thirty-year Trujillo regime. Two years later, and in the midst of labor struggles, a radical wing of the military launched a counter-coup to restore Bosch to power.

But soon the counter-coup turned into a popular revolt on April 24, 1965, cracking open the murderous Trujillist army. One of the most prominent leaders of the 1965 democratic revolution and subsequent anti-imperialist war against the second US military occupation of the country was José Francisco Peña Gómez (1937–1998), a young Afro-Dominican teacher and radio host of Haitian origin. Peña Gómez’s courage and personal charisma won him mass appeal, and his prestige as a PRD leader grew afterward.

If the ’65 revolt had been his rite of passage, the following years would be his baptism of fire: from 1966 to 1978, a former collaborator of the Trujillo dictatorship, Joaquín Balaguer (1906–2002), led a counter-revolutionary government, a direct consequence of the US military occupation and the defeat of the 1965 democratic revolution. Peña Gómez became Balaguer’s nemesis, launching an international campaign to denounce the state repression and save countless political prisoners.

When in 1973 Bosch left the PRD to build a new party (the PLD), his objective was to counter the influence of Peña Gómez and his radical brand of left-wing populism. In contrast, Bosch’s PLD was a reformist, anti-clerical party supposedly organized around the Leninist party model. For Bosch, the petit bourgeoisie class was the most politically advanced of all the social classes in the country.

During cadre training, PLD members read the works of Karl Marx and Friedrich Engels as well as Bosch’s own interpretation of the evolution of capitalism in Dominican society. The PLD published a newspaper, Vanguardia del Pueblo (“The People’s Vanguard”); and a theoretical journal, Política: Teoría y Acción (“Politics: Theory and Praxis”). But despite all its left rhetoric, Bosch, whose outright opposition to social revolution and working-class agency was an open secret, built a multi-class nationalist project. In retrospect, this early political orientation signaled the party’s nationalist and right-wing impulses in the 1990s best exemplified in the formation of the Frente Patriotico, an electoral alliance between the PLD and the most recalcitrant sectors of the Dominican right.

In June 1996, and to the utter disbelief of many rank-and file PLD members, the leadership of the PLD entered into an electoral alliance with the Dominican right known as the Frente Patriotico Nacional (Patriotic National Front). Its leading figures were two ultraconservative politicians: Balaguer, from the right wing Partido Reformista Social Cristiano (PRSC, Social Christian Reformist Party), and Vincho Castillo, from the far-right Fuerza Nacional Progresista (FNP, National Progressive Force); both were former collaborators of the Trujillo dictatorship as well as racist pamphleteers during the dictatorship and thereafter.

A close US ally in the fight against communism as well as a close collaborator of François Duvalier’s dictatorial regime (1957–1971) in neighboring Haiti, Balaguer’s twelve-year reign was responsible for jailing, torturing, and murdering approximately 6,000 people including young revolutionaries, labor organizers, and barrio dwellers.

The roots of the PLD–right wing alliance, the Bosch-Balaguer pact, go back to 1994, when Peña Gómez won the presidential election. But Balaguer, who was both the sitting president and Peña Gómez’s main challenger, claimed victory. Balaguer had already made a habit of rigging elections, having done so in 1990, depriving Juan Bosch of becoming president.

To avoid bloodshed, Peña Gómez accepted a Washington-sponsored pact under tremendous pressure from Balaguer’s business and military claque. Calling for new elections in 1996, “The Pact of Democracy” introduced a two-run system for the presidential elections, in which a second round of voting takes place if no candidate receives a majority of the votes. The new voting method would prove to be disadvantageous for Peña Gómez in the days to come.

Fifteen days before the runoff elections, the Frente Patriotico launched a xenophobic, anti-Haitian, and racist campaign, accusing Peña Gómez of being a fifth column working on behalf of foreign imperialist powers like the United States, France, and Canada. Among the most outlandish claim was the existence of an international plot to fuse Haiti and the Dominican Republic into one country. The Right tapped into anxiety and fear as well as the anti-Haitianism disseminated for decades by conservative politicians and intellectuals with the aim of sowing divisions among Haitians and Dominicans.

But the racist assault on Peña Gómez was not a new phenomenon. In the 1980s, Balaguerista supporters circulated an antisemitic cartoon linking Peña Gómez with communism and a so-called Jewish conspiracy to take over the world. The imagery of this propaganda cartoon referenced Peña Gómez’s role as a leading member of the social-democratic Socialist International in the Americas.

Although the PLD and the far-right party Fuerza Nacional Progresista (National Progressive Force — FNP, for its Spanish initials) broke their alliance in 2015, an unspoken alliance exists as the PLD has already embraced the retrograde, social-conservative agenda of the political and religious right.

And since coming to power with the Right’s blessing in 1996, the Dominican state in the hands of the PLD and its right-wing allies has continued to be, as in the past, subservient to Washington and foreign mining companies like the Barrick Gold. Both former president Leonel Fernández (1996–2000, 2004–2012) and current president Danilo Medina (2012–2016, 2016–2020) have been instrumental in the machinery of terror that defines the Dominican state.

The PLD in power represents a continuity, a sort of Balaguerismo without Balaguer, in which destructive, market-oriented economic policies hurt people’s livelihoods, cut public spending on health care and education, wreck the environment, roll back democratic gains, and pillage government coffers.

Within two decades, the PLD created a toxic culture by institutionalizing racism to target Haitian immigrants and Dominico-Haitians while also policing women’s bodies. The 2010 racist, sexist, and homophobic constitution — backed by both the Catholic Church and the far right — can be added to a long list of crimes. That 2010 constitution under Leonel Fernández served as a blueprint to the Constitutional Court’s infamous ruling on September 23, 2013 that stripped citizenship from a large swath of Dominicans of Haitian origin retroactively to 1929.

Opposition parties like the Partido Revolucionario Dominicano (Dominican Revolutionary Party, PRD) are also complicit in the ultraconservative setback under PLD rule. In fact, from 2000 to 2004, former president Hipólito Mejía — from the PRD at that time and now a member of the PRD split Partido Revolucionario Moderno (Modern Revolutionary Party, PMR) — did little to improve women’s lives. With the exception of PMR member of congress Faride Fadul, who has taken a progressive stand on social issues, the new party’s neoliberal orientation augurs more of the same.

The formation of the Frente Patriotico was a watershed moment in contemporary Dominican politics. In recent years, and as a reflection of the rise of neo-fascism and far-right populism worldwide, the Caribbean nation has also seen the emergence of a small but organized and vocal fascist current. After two decades of almost nonstop, daily doses of right-wing propaganda amplified by the state, the mainstream media, and the Catholic Church, we are witnessing the normalization of racism, xenophobia, homophobia, and sexism at an alarming rate.

Last June, two Haitian workers, Victor Pierre and Esil’homme Atul, were murdered at the hands of a racist mob without repercussion or condemnation from the government. A statement signed by local and international organizations as well as individuals and circulated by the Socialist Workers Movement (MST), a small anti-capitalist group, condemned this hate crime:

This brutal hate crime against two innocent Haitian workers is new evidence of the degeneration of the racist regime in the Dominican Republic, and particularly in the El Cibao region, which has become a center of operations for ultra-right nationalist groups. The mayor of Santiago, Abel Martínez Durán, who is a member of the Central Committee and the Political Committee of the ruling Dominican Liberation Party, has promoted hate campaigns against Haitian immigrants and has encouraged his followers to use excessive force, abuse, extortion and theft from Haitian nationals.

Calling for the broadest solidarity with Haitian immigrants, the statement linked the recent spate of anti-Haitian violence with racist propaganda and racist policies.

Despite more than two decades of racist propaganda and xenophobic policies in the aftermath of the PLD-right wing alliance, Dominican-Haitian friendship and solidarity haven’t been snuffed out. Still, the fight to democratize Dominican society after two decades of PLD reign is daunting. In the Dominican Republic as elsewhere, defeating a reactionary political class that will do anything to perpetuate its power will require a popular and internationalist movement that rejects all forms of oppression and exploitation.

This article was originally published by Jacobin.