The Anti-Sandinista Youth of Nicaragua

The popularity of a new museum in Nicaragua underscores youth dissatisfaction with Daniel Ortega and his Frente Sandinista de Liberación Nacional. 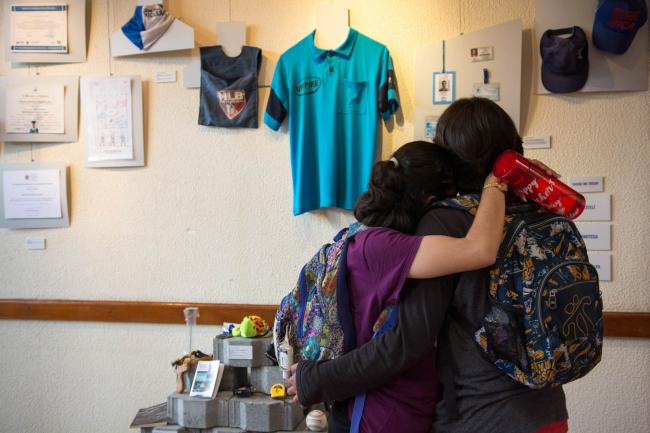 In the main hall of the Instituto de Historia de Nicaragua y Centroamérica (IHNCA), photos hang from the ceiling and twist in the breeze. In each, family members of the victims of government repression—which took place across Nicaragua in 2018—hold images of their loved one. Along the walls are belongings of the fallen victims: trophies, shirts, musical instruments, and sports equipment. The objects lie upon adoquines, heavy paving stones stacked in miniature versions of roadblocks that had cropped up in Managua and elsewhere. The Museo de la Memoria Contra la Impunidad offers testimonies and a site of remembrance for the victims of government violence. The popularity of the exhibition confounded all expectations. More than 2,000 attendees arrived in the first two days. Emilia Yang, the museum’s director, recalls that the staff expected 5,000 visitors during the entire month, and printed materials accordingly, but “that was over in the first three days.”

In recorded testimonies presented in a darkened room off the main hall, family members describe the lost aspirations and grieve the disappearances. One father tearfully recalls finding his 17-year-old son at the hospital and asking the staff “why did they do this if [he] is in the Juventud Sandinista?” Statistics presented in the exhibition show that most victims were under 25, and the youth was reflected in the faces of groups arriving in the exhibition. The presence of young Nicaraguans as victims of violence, participants in the protests, and visitors paying homage to their peers underscores a larger divide in Nicaraguan politics and society. More than half of Nicaraguans belong to a generation raised on stories of revolution, war, and hardship, but with no memory of the violence of the 1980s. For those raised in Sandinista families, the repression of 2018 proved to be a breaking point, forcing them to turn their backs of Ortega and his Frente Sandinista de Liberación Nacional (FSLN).

Historically the Frente Sandinista counted on the support of young Nicaraguans and enabled wide-scale participation in the revolutionary project through mass organizations. Factors driving youth away from the party are multifaceted and intertwined with global trends such as the fallout from the global recession and perennial inequality. But one underemphasized element is the changing role of FSLN mass organizations. Popular perception of Sandinista youth groups and neighborhood associations has irrevocably shifted and links these organizations with the surveillance and corruption of the Sandinista state, as well as repressive violence.

The FSLN and Nicaragua’s Youth

After toppling the Somoza regime in 1979, the new Sandinista government benefited from a demographic tilt, with roughly 67 percent of the country’s population under the age 24. The revolutionary government channeled the support of young Nicaraguans in organizaciones de masas such as Juventud Sandinista de 19 de Julio (JS), which recapitulated both the militarized discipline and utopian impulses of the Frente Sandinista. JS contributed to hallmark accomplishments of the revolution by organizing tens of thousands of students and young volunteers in agricultural harvests and literary brigades. The group had a reputation for ideological policing and threatening non-Sandinistas. Rosalía, a JS member in the early 1980s, interviewed for the protest collection Diplomado en memoria y comunicación, recalled attempting to convince barrio members to join the patriotic army: “When we went walking on the streets as Juventud Sandinista, no one left their house.” Beyond soliciting volunteers for military service, JS members were also present in the field, blurring the line between community and military service. In March 1983, 17 JS members, including one 16-year-old, died in combat with a Contra unit in the north of Matagalpa. The fallout from this event and the introduction of compulsory military service helped to corral the JS into a strictly civilian role, but the inherent militarism did not abate.

After the 1990 electoral defeat of the FSLN, right-wing critics saw the hand of Ortega in every strike and protest of the Chamorro era. But this reading of events underscores the degree to which mass organizations challenged the command-style rule of the FSLN. In the pro-Sandinista Barricada, JS leaders recognized persistent issues of gender inequality and authoritarianism, arguing the group ought to have “organic independence from the FSLN and its own identity,” while remaining “more radical than the party.” But the autonomy experienced by mass organizations was not complete. A former member of Unión Nacional de Estudiantes de Nicaragua (National Union of Nicaraguan Students, UNEN) described the group as Ortega’s “right arm inside the universities,” and the groups often advanced a Sandinista agenda, such as helping to organize wide-scale demonstrations against budget cuts to public universities. Despite the activity, during the neoliberal era, mass organizations languished in membership and influence. Fairweather members drifted from the groups, leaving behind a core group of activists and Sandinista true believers. 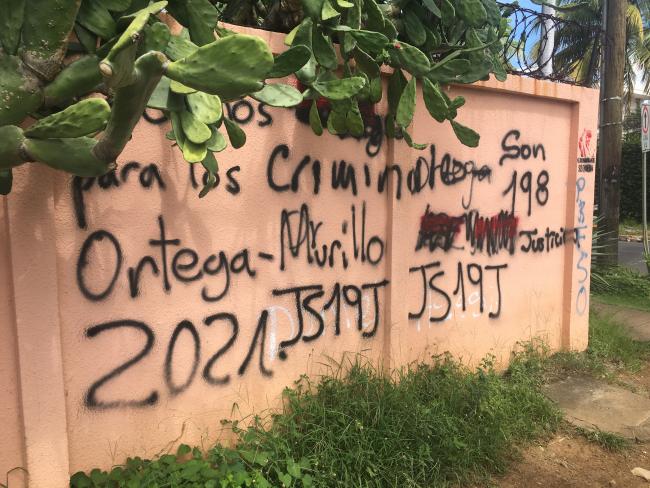 After winning the 2006 elections, the resurgent FSLN offered few roles for mass organizations in its program of moderate economic growth and placid relations with business and religious leaders. Accusations are common that JS and neighborhood organizations Consejos de Poder Ciudadano (Citizen’s Power Councils, CPC) play central roles in the networks of asistencialismo which provide support to the FSLN. Critics claim that both groups act as population control, indicating that volunteer members provide intelligence gathering and gatekeeping for government employment. One Managua citizen told La Prensa, “The CPCs and the JS do intelligence work, identifying people who go to the marches, watching who they talk to, who they visit, taking photos and videos.” Accusations also link JS members to violence, most notably during the #ocupaINSS event in June 2013. On the night of June 21, a combination of police and masked gang members assaulted protesters on the grounds of the Instituto Nicaragüense de Seguridad Social, leaving several wounded. Victims of the assault claimed that JS members participated in the attacks and kidnapped individual protesters. One protester recalled the JS “had license to do anything. They could rob, beat, destroy, assault…under the protection of police agents.” She notes the next day the JS marched for non-violence, a demonstration she called, “cynical…they show[ed] up the next day in the roundabout after they had destroyed the camp, with their songs, ‘choose love over hate.’”

Despite many similarities to the #ocupaINSS demonstration, the 2018 protests exploded far beyond the scale of 2013. Social media fueled the uproar, as sharing of videos, eyewitness accounts, and journalistic reporting drew increasing numbers into the protests. Evidence shows assaults and murders carried out by uniformed officers, paramilitary groups, and masked youths. Providing solid evidence about the identity of gang members responsible for violence may be impossible. Inside Nicaragua, hearsay and anonymous testimony indicate members of CPCs and JS offered weapons and cash to those willing to target marching protesters.

Images of threatening masked youths—one popular red-and-black shirt at rallies simply reads “PLOMO”—inevitably recalls a lineage of politicized gangs in Nicaragua, such as the turbas divinas of the 80s and the turbas nicolasianas of the Somoza era. Pedro, a member of JS during the 1980s, called the present-day group “young fascists” in an article for Confidencial and contrasted his own participation with the violence of 2018: “We were part of a social cause which included literacy, and harvesting coffee, sugarcane, and cotton...It wasn’t brute force protected by billyclubs or wide-scale vandalism.”

Pedro’s recollections suggest the complexity of revolutionary heritage and the uncertain place of militarism in the Sandinista legacy. He emphasizes the social accomplishments and peaceful collectivity. But a strain of romanticized armed struggle continues to influence present-day sandinismo. For those raised in Sandinista households, revolutionary culture made a powerful impression. One participant in the 2018 protests recalled her parents “always brought me to the Plaza de la Revolución. I liked seeing the huge group of people chanting slogans, singing.” For her, the protests were a “bucket of cold water which fell on us until our beliefs faded.” Rosalía remembers when she “started to differentiate between orteguismo and sandinismo” and said, “Sandinismo is buried for me too.” Alternatives to the sandinismo offered by the FSLN in formal politics have struggled to capture popular support, such as the Movimiento Renovador Sandinista as well as the insurgent challenge offered by Herty Lewites prior to the 2006 election.

The critiques of former Sandinistas and the extensive connections between JS, UNEN, and CPCs to repressive violence and networks of corruption indicate that perceptions of these groups have become irrevocably tainted.

The Ortega-Murillo government uses “fake news” tactics to frame the protests as a coup attempt and to call into question the extent of violence and the existence of political prisoners. The tactics are effective in part because there exists support for regime change both inside and outside of Nicaragua. Mounting a defense against the FSLN narrative requires careful reporting and nuanced understandings of the political climate. To establish facts regarding government violence, the Museo de la Memoria and other investigations such as GIEI collect visual evidence and audio-visual testimonies. 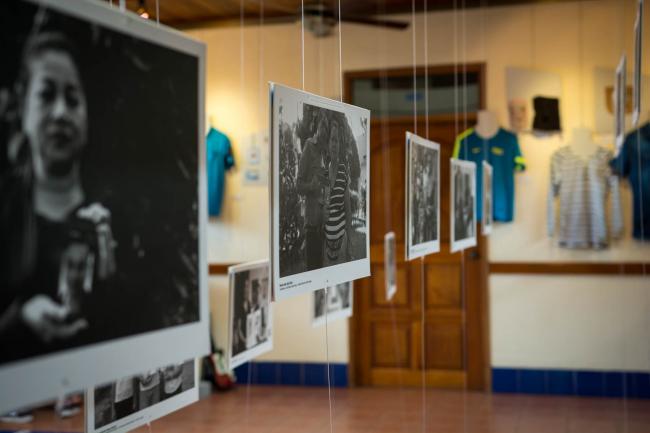 The Museo exhibition is an outgrowth of the Asociación Madres de Abril (AMA), a group of mothers and family members of fallen victims. AMA emerged as an organic, ad-hoc group which called attention to the victims through demonstrations at Managua landmarks before becoming official. Though not a youth organization, AMA represents a vision for social movements that differs from that which the FSLN offers. Without the active participation of young Nicaraguans in social movements, the FSLN relies on appeals to sandinismo and clientelism, pillars that have further eroded in the wake of the 2018 protests.

Meanwhile, AMA members continue to contact the family members of victims to enshrine their memories online in a living museum. Originally scheduled for one month, the Museo de la Memoria has extended its stay in IHNCA through November and December. During its stay at IHNCA, the exhibit serves as a space of non-violent resistance to the current government, hosting music, dance, speakers, and a visit from the Alianza Cívica por la Justicia y la Democracia. Across the campus of the Universidad de Centroamericana, undergraduate students wear AMA pins on their shirts and backpacks, a subtle yet open challenge to the government narrative.