As President Nayib Bukele challenges the key tenets of the peace accords in El Salvador, the stakes for the country’s nascent postwar democracy have never been higher. 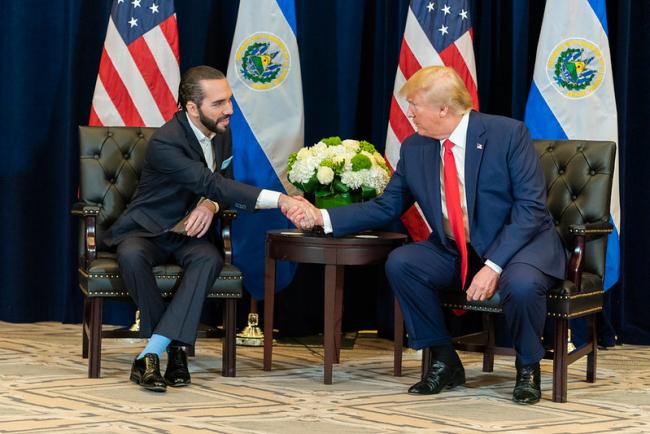 On Sunday, February 9, armed soldiers in full camouflage entered the Salvadoran legislature. They fanned out across the half-empty chambers, stationing themselves behind startled deputies and lining the hallways. Outside, snipers perched atop government buildings. President Nayib Bukele marched into the occupied chambers and took his seat in the Assembly President’s chair. “Now I think it’s quite clear who has control of the situation,” he said.

The chilling spectacle recalled the darkest days of Salvadoran military dictatorship, and marked a stark contrast to Bukele’s carefully cultivated image as a youthful, post-ideological reformer. The ease with which the so-called millennial president demolished the fragile institutional consensus of the 1992 Peace Accords that ended the 12-year civil war only confirmed what Bukele’s critics have long warned: The president is flirting with fascism.

The constitutional crisis began on February 6, following lawmaker’s reticence to approve a $109 million international loan requested by the Bukele administration for security equipment. Bukele, who campaigned on the slogan “There’s enough money when nobody steals,” claimed the funds were necessary for the implementation of “Phase Three” of the government’s “Territorial Control Plan” against gang violence.

For the first time in Salvadoran history, the president invoked Article 167 of the Constitution, which empowers the executive to convene the legislature in emergency situations. Bukele called an extraordinary legislative session for 3:00 PM on February 9 and invited the public to rally outside “to defend the country’s security and give our soldiers and police the conditions they deserve.” “If the deputies do not attend,” he tweeted, “they will be breaking with the constitutional order and the people will have the power to apply Article 87 of the Constitution,” which governs the people’s right to insurrection. If the legislators refused, Bukele claimed the power to dissolve the congress.

But the two largest parties in the Assembly, the right-wing Nationalist Republican Alliance (ARENA) party and the leftist Farabundo Martí National Liberation Front (FMLN), rejected the president’s authority. Bukele, who campaigned to victory in 2019 against both parties after his 2017 expulsion from the FMLN, rallied his followers against the lawmakers as traitors to the nation and complicit with the gangs.

On Friday, February 7, Bukele sent a sobering message to the legislators, dispatching the National Civil Police and Armed Forces to their homes to strip the deputies of their government-assigned security detail. The next day, the Armed Forces announced their fealty to Bukele, declaring: “All our troops have sworn loyalty to the President of the Republic and Commander in Chief of the Armed Forces and we await his orders.” State security forces surrounded the legislature. They ousted Congress’s security guards and rebuffed members of the press who tried to gain access. Government workers began assembling a stage platform outside the legislature’s gates.

As opposition lawmakers and civil society groups raised international alarms, the notorious right-wing coup apologist and president of the Organization of American States, Luis Almagro, offered his support to Bukele: “I spoke with El Salvador’s Foreign Minister by phone. She expressed her administration’s respect for the constitution and institutionality, and reaffirmed President Bukele’s government’s commitment to security policies that have yielded positive results.”

Inside, only 28 of 84 legislators obeyed the president’s summons, not enough for a quorum. Deputies of the right-wing GANA party, which sponsored Bukele’s 2019 presidential bid after he failed to register New Ideas in time, presented themselves, as did three dissident ARENA legislators and members of smaller conservative parties. The FMLN, which was celebrating its 40th annual convention, was the only party to boycott the Sunday session entirely.

The mood in the chambers was congratulatory at first. But the Armed Forces’ sudden entrance appeared to distress the assembled representatives. After taking his seat in the occupied legislature, Bukele raised his hands to face in silent prayer. Then he stood and, military escort in toe, strode out of the building and onto the awaiting stage. “I asked God,” he told the rapt audience, “And God said to me, ‘Patience.’” He gave the legislators a week to approve the loan.

Major Salvadoran social movement organizations, including the National Alliance Against Water Privatization and the Roundtable for Food Sovereignty, issued a joint statement: “The images of soldiers and police invading the chambers recall the dictatorial and repressive past that the president’s millennial democracy seeks to revise. The Bukelian performance included the flagrant violation of the secular state: The president spoke to God, surpassing even the Bolivian coup president Jeanine Áñez who carried the Bible into the presidential palace. […] As popular organizations, we condemn and denounce this serious setback in our national history, and we demand that it not remain impugn.” The groups called on the Attorney General’s Office and Supreme Court to take action and urged the legislature to take up longstanding measures of public interest beyond public safety that have been sidelined by right-wing parties, such as the enshrining of water as a public good and a human right, the de-privatization of the pension system, and progressive tax reform.

The FMLN filed suits with the Supreme Court, the Attorney General’s Office, and international bodies against the administration and called for the resignation of the heads of the PNC and Armed Forces. “We want to tell the president that we have already confronted thugs, with power and with guns. We are prepared to resist however necessary for democracy. We are prepared to fight against dictators,” declared FMLN General Secretary Oscar Ortiz.

Outcry sprang from within the ranks of Bukele’s coalition as well. “Militarizing the chambers was not necessary. We came in good faith,” a representative of the GANA party told the press outside the legislature Sunday. Key backers of the administration balked. The top representatives of Salvadoran capital issued a stern rebuke, concerned that Bukele’s actions “sent a signal that you should think twice before coming to invest in El Salvador.” “I do not approve of the presence of the Armed Forces in the legislature,” the U.S. Ambassador warned.

The Attorney General opened investigations into the incident. And on Monday, February 10, the Supreme Court announced it had accepted a suit of unconstitutionality against the administration. The magistrates issued an injunction invalidating any extraordinary legislative session and ordering the president to “abstain from using the Armed Forces in activities contrary to those constitutionally established and from putting at risk the republican, democratic, and representative form of government, the pluralist political system, and in particular the separation of powers.” The injunction also ordered the Minister of Defense and Director of the National Civil Police “not to exercise functions and activities other than those constitutionally and legally mandated.”

In response to the injunction, Bukele tweeted: “We will fight this. With the help of God, the people, our Armed Forces, and our National Civil Police. No matter how many resolutions they issue. We know they will try to protect the system. We are ready to give everything, even this position, which just like life itself, is only borrowed.” But his administration scrambled to contain the damage. The office of the presidency issued a statement entitled “Bukele calls for calm in the face of the demand for insurrection,” and in a subsequent communique committed to respecting the Court’s mandate.

As international outcry swelled, including denunciations from U.S. House Foreign Affairs Committee Chairman Eliot Engel and leading members of the Progressive Caucus, the administration continued to revise its version of the events. In a February 15 op-ed in the Miami Herald, Bukele wrote: “My administration was deeply concerned about a popular uprising of frustrated Salvadorans mobilized against the National Assembly. This is why we asked the military to be present, should violence erupt as tens of thousands of Salvadorans gathered outside the National Assembly calling for the removal of its members.”

In the op-ed, Bukele doubled down on his law and order rhetoric, writing that the leadership of the “pro-Maduro FMLN” and “the right-wing death-squad sponsor ARENA” parties is “actively engaged with terrorist groups in El Salvador,” citing a recent investigation implicating ARENA politician Norman Quijano in deal-making with gangs. Bukele claimed his security strategy was responsible for the reduction in the official murder rate under his tenure, and that without the loan, “our law enforcement and military officials will be left vulnerable to the terrorist organizations financed by members of the National Assembly.”

The cynicism of Bukele’s spin is hard to overstate. Bukele’s repressive anti-gang policing plan is no innovation—his strategy is a continuation of the very same U.S.-backed zero-tolerance strategy that has dominated Salvadoran security policy for decades. Indeed, these measures have only escalated the violence over time, radicalizing and fortifying the gangs while criminalizing poor Salvadoran youth. Analysts have raised serious questions about the official homicide figures, pointing to a rise in disappearances and extrajudicial killings by state security forces. Others, like researcher Janette Aguilar, suggest that Bukele, who negotiated with gangs as Mayor of San Salvador, is employing the same tactics today.

Bukele appears to have overplayed his hand, alarming human rights defenders and oligarchic elites alike. The administration hastened to minimize the offense, but Bukele’s dictatorial disposition has been laid bare.

Whatever its outcome, the crisis, calculatingly contrived by the president, marks the radicalization of his project. Bukele campaigned as a Silicon Valley-style disrupter, positioning himself against a corrupt political class encumbered by outdated ideological divisions and pledging to mobilize international investment to catapult El Salvador into the 21st century. Rapidly, however, he assembled all the signifiers of the ascendant fascist right. By exalting and politicizing the Armed Forces, conflating any opposition with “terrorist” criminal gangs, and embracing evangelical Christian fundamentalists, Bukele is aligning himself and his base with the region’s most reactionary forces.

In his June 2019 inauguration speech, Bukele claimed to have “turned the page on the postwar.” On January 16, his administration became the first not to commemorate the anniversary of the UN-negotiated Peace Accords that demilitarized the state and established a fraught neoliberal democracy in El Salvador. The events of February 9 confirmed in the most frightening terms Bukele’s contempt for that struggle—both its modest achievements and many unmet demands.

Polling shortly before the crisis showed that six months into his term, Bukele remained broadly popular. His consolidation of power comes—not coincidentally—as the electoral Left is at its weakest in decades. El Salvador’s social movements and dissidents face the formidable task of cultivating a mass opposition to the president’s agenda where little exists. As Bukele challenges the key tenets of the peace accords, though, the stakes for the country’s nascent postwar democracy have never been higher.

Hilary Goodfriend is a doctoral student in Latin American Studies at the Universidad Nacional Autónoma de México (UNAM) in Mexico City. She is a member of the NACLA editorial board.